Australian Federal Police Commander Jennifer Hurst speaks as she stands near to part of a Buk missile recovered from the site of the MH17 crash, during a press conference regarding the downing of Malaysia Airlines Flight 17, in Bunnik, Central Netherlands, May 24, 2018. (MICHAEL CORDER / AP)

THE HAGUE - The Netherlands said on Friday it holds the Russian state responsible for what it called its role in the downing of Malaysia Airlines Flight 17 in July 2014 that killed all 298 aboard.

A Dutch cabinet statement said a "possible" next step would be presenting the case to an international court or organisation for their judgment, adding Australia shared its assessment of Russia's role.

"We call on Russia to accept its responsibility and cooperate fully with the process to establish the truth and achieve justice for the victims of flight MH17," Dutch Foreign Minister Stef Blok said.

"The Netherlands and Australia have asked Russia today to enter a dialogue in order to come to a solution that does justice to the enormous suffering and damage caused by the downing of flight MH17."

MH17 was shot down over rebel-held territory in Eastern Ukraine in 2014, killing all 298 aboard including 28 Australians as it flew from Amsterdam en route to Kuala Lumpur.

Russia has always denied any involvement, and said on Thursday none of its missile launchers have ever entered Ukraine, despite photo evidence shown by prosecutors. 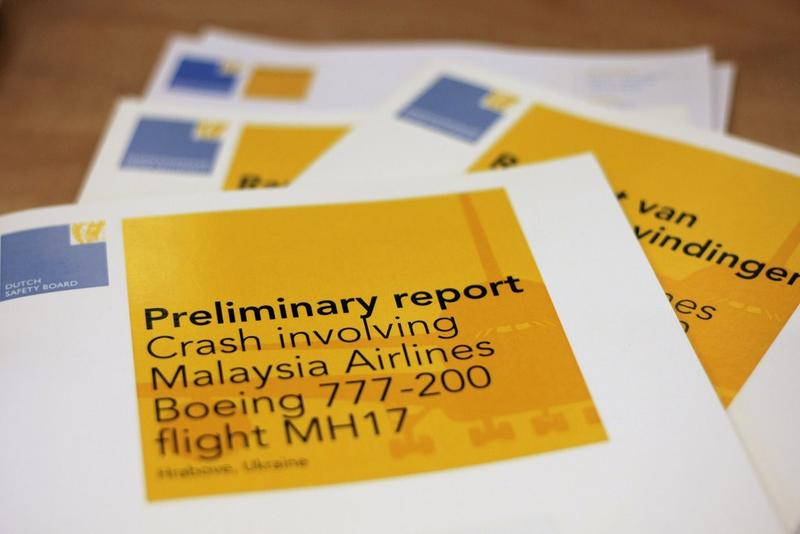 In this Sept 9, 2014 file photo, a stack of preliminary reports by the Dutch Safety Board on the crash of Malaysia Airlines flight MH17 is displayed at the board's headquarters in The Hague, Netherlands. (MIKE CORDER / AP)

The cabinet made its announcement a day after an interim report by prosecutors investigating the plane's destruction said the missile that shot it down was fired from a launcher in Russia's 53rd Anti-Aircraft Brigade.

Blok said that attempts to hold Russia responsible for the plane's downing under international law would be a different, parallel process from the ongoing investigation by prosecutors seeking to establish individual criminal responsibility.