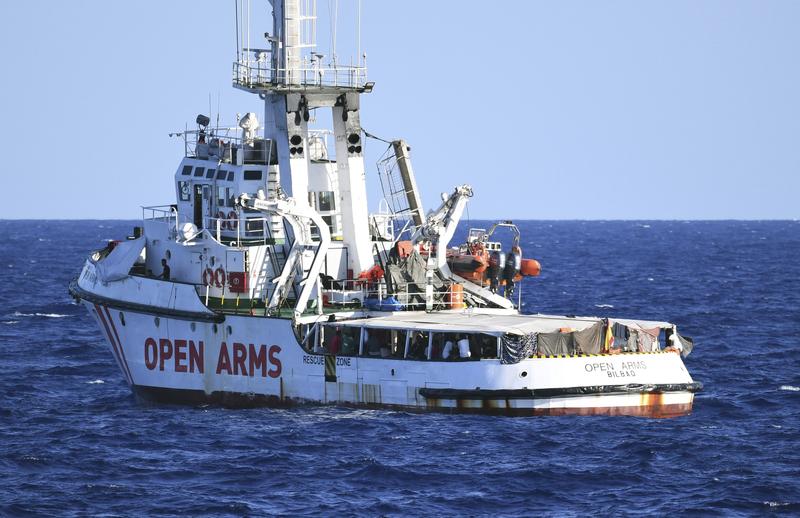 The Open Arms vessel with 107 migrants on board is anchored off the Sicilian vacation and fishing island of Lampedusa, southern Italy, Aug 19, 2019. (SALVATORE CAVALLI / AP)

ROME — The Spanish rescue ship Open Arms resorted to serving pizzas to 107 increasingly angry and sometimes aggressive migrants who are stranded aboard, as Italy's interior minister stuck to his refusal to let the vessel dock at a nearby Italian island in a weekslong standoff.

The migrants were rescued from traffickers' boats in the Mediterranean off Libya and have spent 18 days aboard the Open Arms as they wait to see whether anti-migrant Interior Minister Matteo Salvini will let them disembark on Lampedusa, a tiny Italian island south of Sicily. Six other European Union countries have agreed to take the passengers.

We have no intention in disobeying, we have scrupulously compiled with maritime law

A day earlier, Open Arms' captain informed Italian authorities that the crew of 17 could no longer control the situation aboard, as frustrated migrants resort to fighting.

Separately, the organization's founder, Oscar Camps, told The Associated Press in a phone interview Monday night from Lampedusa, that "it is not a question of how long we can hold out. No one knows what will happen."

"At every instant we must stop fights, aggression, arguments, hunger strikes and stop people from jumping into the sea," exactly like several migrants did a day earlier in a foiled bid to reach the island, he said.

When the migrants were brought back aboard, major fights broke out among the passengers "because they had put the others at risk," Camps added.

In a bid to vary the migrants' food and improve their mood, some of the crew went to the island and returned with 100 pizzas, Camps said. "We have tried everything" to keep spirits calm, he added.

Asked if Open Arms might follow the example of a German captain who defied Salvini's ban and steered a boat packed with migrants to Lampedusa this summer, Camps said he would not.

"We have no intention in disobeying, we have scrupulously compiled with maritime law," he said.

The German captain was arrested but later released after an Italian judge ruled that she was saving the lives of the 40 migrants aboard.

The boat is currently anchored off Lampedusa's coast.

Camps said Italy's coast guard offered to transport some of the migrants to Spain, but Open Arms insisted they must take everyone aboard.

Earlier in the day, Open Arms' president, Riccardo Gatti, suggested that the migrants could be transferred to the major Sicilian city of Catania, where a chartered plane could then fly the 107 migrants to Spain.

Open Arms captain Marc Reig Creus told Italian authorities Sunday that if Italy won't let the ship dock at Lampedusa, it would agree to transferring the migrants to another boat that could make the several days' journey to the port Spain had initially proposed, Algeciras, at the far west end of the Mediterranean.

Open Arms has only two toilets, and last week volunteers who visited the ship said some migrants were forced to use areas where they eat for their bathroom needs. 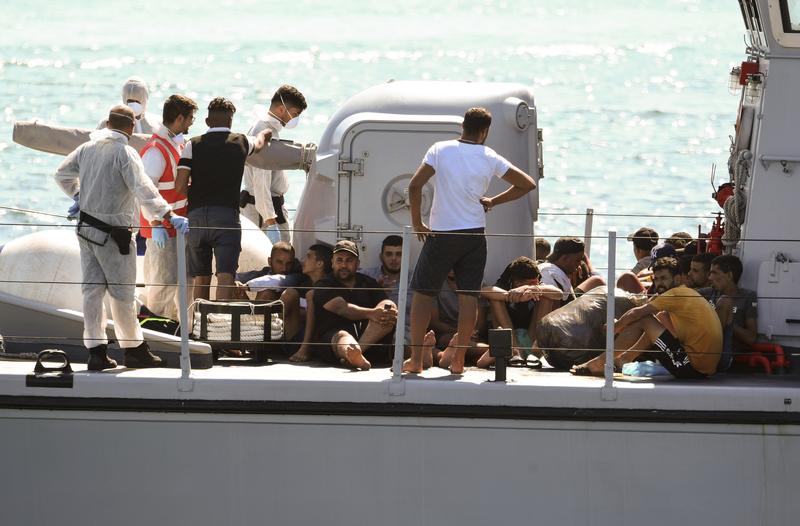 Migrants rescued by an Italian Finance police patrol boat sit in the ship as it docks in the port of the Sicilian island of Lampedusa, southern Italy, Aug 19, 2019. (SALVATORE CAVALLI / AP)

We believe that once the migrants have peace of mind and know that they will navigate to a safe and open port, like the one Spain is offering, this situation will calm down

Spanish Deputy Prime Minister Carmen Calvo said the government had offered to help the Open Arms with food, fuel and medical attention for the journey to Spain.

"We believe that once the migrants have peace of mind and know that they will navigate to a safe and open port, like the one Spain is offering, this situation will calm down," she said. "But the answer was that they (Open Arms) insist on entering Italy."

Camps, in explaining the refusal, said: "We could have done it on Day 1 or 2, but not on Day 18 when we have exhausted our resources," psychologically. "It can't be fixed with a little food, fuel and pats on the back" for a four-day journey, he said, calling conditions on the ship "inhuman."

Earlier on Monday, Open Arms nixed a follow-up offer by Spain to go to a closer port in the Balearic Islands.

Salvini's popularity is soaring among his voter base, which blames illegal migrants for crime.

"Why doesn't Open Arms go to Spain?" he tweeted. "In 18 days, they could have gone back and forth three times from Ibiza and Formentera," two Balearic islands.

Last week, 40 migrants and some family members were allowed to leave Open Arms because they were deemed to be minors, ailing or psychologically troubled.

Meanwhile, the Norwegian-flagged Ocean Viking, which is operated by two French humanitarian groups and has 356 rescued migrants aboard, has been sailing between Malta and the Italian island of Linosa as it waits for a port of safety to be assigned