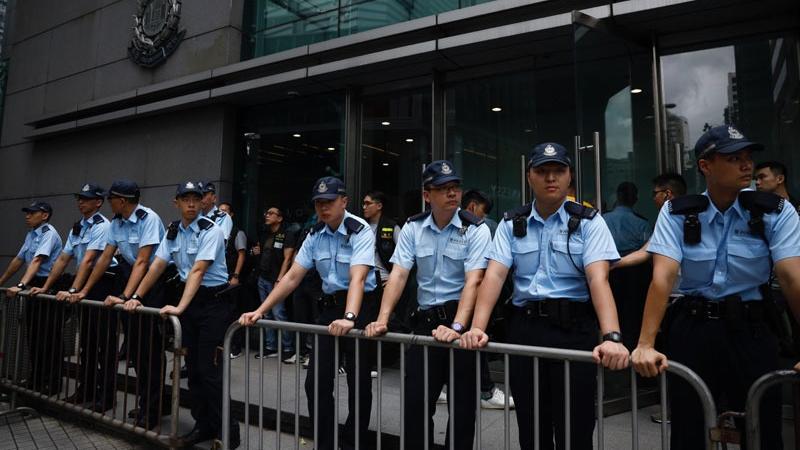 Prominent Hong Kong figures on Sunday pledged support for the police following last Friday’s siege of the police headquarters in Wan Chai by demonstrators demanding a full retraction of the extradition amendments.

They stressed that police morale must be maintained to uphold law and order.

Senior SAR government officials urged the community to unite to heal the rift and move on following the suspension of the extradition bill.

Launching an investigation into the police’s handling of recent demonstrations would hit officers’ morale and harm the city’s stability and order...The police morale must be kept to continue the fight against crime.

Former police chief Andy Tsang Wai-hung said society would be a dangerous place if the police fail to enforce the rule of law, adding if someone breaks the law, the police would have to act.

In his view, the anti-extradition law protests have been a continuation of the “Occupy Central” movement in 2014 and the Mong Kok riot in 2016.

Tam Yiu-chung – Hong Kong’s sole member of the Standing Committee of the National People’s Congress – condemned the protesters for disrupting public services last Friday by laying siege to the police headquarters, as well as the Revenue Tower in Wan Chai.

He said launching an investigation into the police’s handling of recent demonstrations would hit officers’ morale and harm the city’s stability and order. He agreed that police morale must be kept to continue the fight against crime.

During Friday’s siege of the police headquarters by protesters, officers were unable to respond effectively to 60 calls made on the 999 emergency hotline.

Police staff members, who had been trapped at the headquarters since 11am on Friday, left in the early hours of Saturday morning.

Staff removed barriers that protesters had placed at entrances and exits on Saturday. They also cleaned up the external walls of the buildings that were pelted with eggs and painted with abusive messages by demonstrators.

In an internal newsletter, Police Commissioner Stephen Lo Wai-chung said he understood that officers have come under great pressure physically and mentally due to long working hours, provocation and threats of violence.

He praised the police for their professionalism and dedication.

In a statement issued early on Saturday, the force condemned the protesters for besieging its headquarters, saying officers had shown the greatest tolerance, but the demonstrators had expressed their views in an “illegal, irrational and unreasonable” manner.

Chief Executive Carried Lam Cheng Yuet-ngor held a brainstorming session with senior officials on Saturday to seek more effective ways to address the public’s needs. The meeting, attended by heads of bureaus, was in response to a string of protests in the past few weeks, including last week’s disruption of major government services, including immigration and inland revenue services.

Financial Secretary Paul Chan Mo-po said in a blog post on Sunday that the community had devoted a lot of energy to calming the extradition law controversy in the past few weeks.

He noted that senior government officials had made public apologies in the past few days to try to resolve the differences between the government and certain sectors of the public.

He believes that most Hong Kong people do not want further conflicts, confrontation and obstruction of public services. “No matter where we stand, we’re all Hong Kong people. Resentment and suspicion do not make us a better society.”

Chief Secretary for Administration Matthew Cheung Kin-chung called on the community to look ahead and move on.

Hong Kong, he said in his blog, should restore calm as soon as possible, restart and rebuild mutual trust, and work together to build the city.