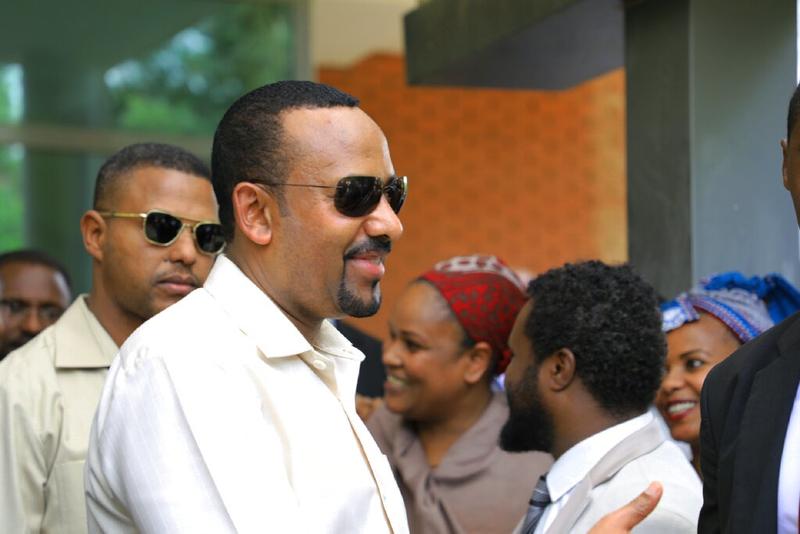 Ethiopia's Prime Minister Abiy Ahmed arrives in Khartoum, Sudan, June 7, 2019, to try and mediate between the ruling military and the country's protest leaders amid an army crackdown that has killed over 100 people this week. (PHOTO / AP)

KHARTOUM, Sudan — Pro-democracy protest leaders on Saturday called on Sudanese to take part in acts of civil disobedience in a bid to pressure the military to hand over power after the deadly break-up of their main sit-in in the capital of Khartoum earlier this week.

The call came a day after Ethiopia's Prime Minister Abiy Ahmed met separately with the ruling generals and the protest leaders in an effort to revive talks that were almost dead after the dispersal of the sit-in outside the military's headquarters on Monday.

The Ethiopian initiative is welcomed. But we will not sit at the same table with the military council until our demands are met.

The Sudan Doctors' Central Committee, one of the protest groups, said at least 113 people have been killed and more than 500 wounded since Monday. It said more than 40 bodies have been pulled from the Nile River in Khartoum and taken away by security forces since the violence erupted.

The Sudanese Professionals' Association, which spearheaded protests that led the army to oust President Omar al-Bashir, said it accepted Ahmed as a mediator to resume negotiations with the military council but had a set of conditions before returning to the negotiating table.

Those conditions included establishing an independent internationally backed body to investigate violence since al-Bashir was ousted by the military on April 11, and hold those responsible accountable. The umbrella group also called for the release of all political prisoners and said mediation should focus on the transfer of power to a civilian-led authority.

Mohammed Yousef al-Mustafa, a spokesman for the professionals association, said the Ethiopian initiative focused on restoring all previous deals between the military council and the Forces for Declaration of Freedom and Change, an alliance representing the protesters in the negotiations. The head of the military council, Gen Abdel-Fattah Burhan, had said earlier this week that all previous deals would be canceled.

Those deals include a three-year transition period, a Cabinet formed by the protesters and a legislative body with a majority FDFC. Both sides, however, were split over the makeup and leader of the sovereign council that would run the country during the transition.

Al-Mustafa said the Ethiopian prime minister proposed a council with eight seats for civilians and seven for the military, with a rotating leadership.

"The Ethiopian initiative is welcomed. But we will not sit at the same table with the military council until our demands are met," he told The Associated Press.

In a brief statement Saturday, the military council welcomed Ahmed's initiative and repeated its willingness to resume talks to reach "satisfactory understandings."

In an escalation, the SPA said the civil disobedience will begin Sunday and last until the military council hands over power to civilians.

Mohammed Esmat, a negotiator for the protesters, was arrested after his meeting with the Ethiopian prime minister on Friday in Khartoum, the party said.

The British ambassador in Khartoum, Irfan Siddiq, condemned the arrests and called for the military council to release them.

A spokesman for the military council did not immediately answer calls seeking comment.