A veterinarian conducts surgery on a surrogate mother dog at a lab owned by Sinogene, the first biotech company in China to provide pet-cloning services, in Beijing last month.(WANG ZHUANGFEI / CHINA DAILY)

Once someone makes the decision to own a pet, they understand that it will die someday. However, how many owners are genuinely prepared to accept that their pet's life clock is ticking down to the last few minutes?

For Liu Yiwei, a doctoral student in Beijing, the answer was "not at all" before she heard about a technique that would bring her beloved Japanese spitz "back to life" - pet cloning.

Liu's dog, Guai Guai, died on June 4, eight months after the 15-year-old bitch was diagnosed with cancer. Chemotherapy treatment cost Liu about 130,000 yuan (US$19,000), and she also spent 1,200 yuan a day on intensive care for Guai Guai in her final weeks.

A piece of tissue about the size of a sesame seed was taken to provide the raw material for the cloning procedure, which costs about 380,000 yuan

The cost imposed a heavy financial burden on Liu, but she believes the outlay was worthwhile because Guai Guai was more than just a pet to her - they had been together since Liu was 11 and Guai Guai was just a few months old.

"She caught my eye at first sight as the weakest, most timid and tender puppy, compared with her brothers and sisters," Liu said.

Unlike other Japanese spitz, whose pure blood is indicated by their snow-white fur, Guai Guai had a small paleyellow patch on her back. That meant she was likely to be put down by the dog house where she was born, which would soon close down, or be released into the wild, where she would not have lasted long.

"At that moment, I knew she was my choice," Liu said.

At the time, Liu's parents were both busy with work, so Guai Guai became her closest companion. "I am 27 years old. Guai Guai was with me for more than half my life. She was far beyond a pet; she was a family member," she said.

The company that impressed her most was Sinogene, the first biotech outfit in China to provide such a service. It cloned a gene-edited beagle in May 2017, and later launched a commercial cloning business.

In April, Liu took a crucial step in preparing for Guai Guai's death; she preserved the dog's genes at Sinogene's lab in Beijing.

A piece of tissue about the size of a sesame seed was taken to provide the raw material for the cloning procedure, which costs about 380,000 yuan. As the procedure can be undertaken at Liu's convenience, she has decided to begin as soon as she can raise enough money.

A surrogate mother and a cloned puppy are seen on a nomitor in the lab on May 29, 2019. (WANG ZHUANGFEI / CHINA DAILY)

Dogs' barks could clearly be heard in the corridors outside Sinogene's lab at a science and technology park in a northern suburb of Beijing earlier this month.

On the monitors, three plump cloned puppies could be seen sleeping next to their surrogate mothers. In about two months, they will see their owners.

The clone is tested by an independent company, which provides a certificate confirming its genetic connection with the original pet

The lab is where the miracle of Guai Guai's "rebirth" will happen. Once the cloning procedure starts, a veterinarian will harvest eggs from a healthy female dog and Guai Guai's DNA will be inserted into them, fusing with the cells to produce embryos genetically identical to the dead pet.

Unlike the assisted reproductive technique for humans in which two to four embryos are usually implanted, only one or two dog embryos out of every 15 created can be successfully grown and then born.

The process usually lasts six to 10 months. The client only takes possession of their cloned pet when it is about 2 months old, an age at which it is less likely to die as a result of rejecting artificial nutrients after being removed from its breastfeeding surrogate mother.

The clone is tested by an independent company, which provides a certificate confirming its genetic connection with the original pet.

Since Sinogene started cloning pets, it has produced about 30 dogs, ranging from Chihuahuas to Tibetan mastiffs, and if all goes well, the lab will see its first cloned cat by the end of the month.

"The scientific community has always considered dog cloning to be the most difficult procedure, because poor egg quality and the asynchronous (unsynchronized) reproduction cycle of the surrogate mother both pose great challenges to the cloning process," said Zhao Jianping, Sinogene's vice-president.

Sinogene is a relative newcomer to the commercial pet-cloning sector. For more than a decade, South Korea and the United States were the industry pioneers. As a result, companies from those countries initially benefited from the rise in pet ownership in China.

In 2012, Chinese people spent 33.7 billion yuan on pets, according to Qianzhan, an internet platform that provides industry analysis and forecasts.

Last year, the market reached 170.8 billion yuan, with dogs accounting for about 66 percent and the remainder being cats and other pets. Qianzhan estimates that China's pet market will hit 200 billion yuan next year.

In 2005, South Korea's Sooam Biotech Research Foundation was the first organization to successfully clone a dog. Since then, it has produced nearly 1,200 dogs for owners worldwide.

In 2014, Sooam began working with Boyalife, a Chinese biotech company, to meet demand for pet-cloning services in China.

Meanwhile, ViaGen Pets and Equine, a company in Texas that focuses on animal genetics, has also expressed optimism about China's market potential.

Having started cloning pets about five years ago, it has witnessed growing demand every year, including from Chinese clients.

"We look forward to having more clients from China. The country offers terrific opportunities for us because pets have become friends and family members to more Chinese people," said Blake Russell, the company's president.

Early next year, Guai Guai will be "reborn" in Sinogene's lab. Liu acknowledged that the new puppy will not actually "be" Guai Guai, but it will help with the grieving process

While those are huge sums to most Chinese, Sinogene's Zhao believes people are willing to make sacrifices for their beloved pets.

"Most clients who ask for a pet to be cloned or have their pet's DNA preserved are not wealthy, but they see their pets as family members. Some of our clients have even taken out loans to clone them," he said.

He cited his parents as an example. "Teddy, my parents' dog, got lost last month. After he had been found, they asked me to preserve his DNA because they had suddenly become aware of their strong bond and could not bear the thought of losing him forever," he said.

Zhao's parents live in a small town in Shaanxi province, where dogs are traditionally used to guard homes, but with the country's rapid urbanization rate, many older people whose children have moved away for work are turning to pets as companions.

To date, Sinogene has preserved the DNA of more than 100 pet dogs and cats, according to Zhao.

Though most of the clients were Chinese, the company has sent its veterinarians to help people in countries such as Mexico, Greece and India.

In one case, an owner brought his pet to China from the US for cell preservation. Zhao estimated that the growing market will bring the company at least 100 orders for pet cloning in the near future. 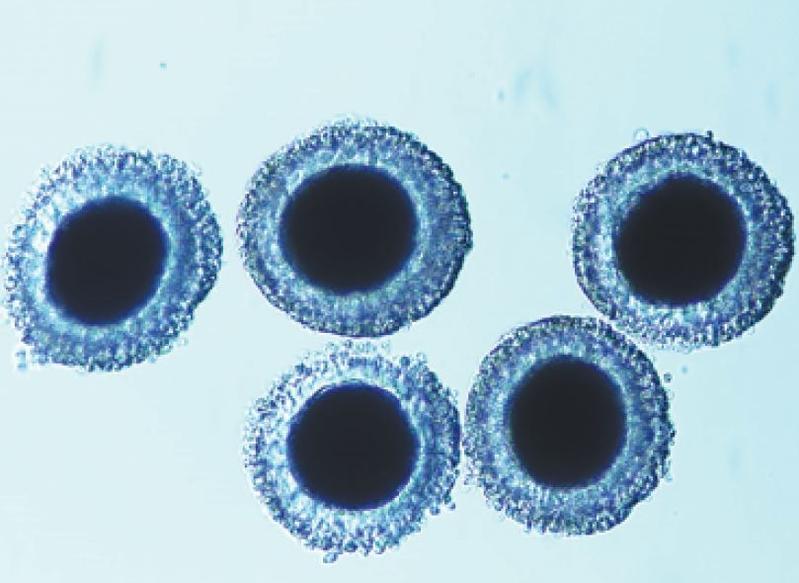 Dog eggs under a microscope. (PHOTO PROVIDED TO CHINA DAILY)

However, the big question for many owners is whether the cloned pet will be exactly the same as the original. It may resemble the dead animal, but will it have the same personality?

"A cloned pet has a consistent genetic sequence that directly relates to the (predecessor's) shape, body structure and innate abilities. Genes can be expressed in different ways, though, so the new animal may display slight differences," Zhao said.

The clone will be the same sex as the original, but just as in nature, it may have slight differences in observable characteristics, such as different markings.

In addition, the environment interacts with genetics to affect many factors, such as personality, behavior and fur color.

"For example, with Dalmatian dogs it's impossible to guarantee that each of the spots will be the same shape and in the same place as the original. But many owners will see signs of their original pet because of the clone's similar behavior - some puppies will eat in the same way as the original, while others will sound identical when they bark," Zhao said.

"However, all cloned pets share a similar trait; they are naughty because they are usually spoiled by their owners. People treasure cloned pets very highly; not just because of the cost, but also because of the once-in-a-lifetime chance to live with a 'copy' of their old pet."

Despite the potential, Zhao said pet cloning will probably only account for a small part of Sinogene's growth strategy.

"Our major target might be gene editing and cloning for medical use, which will not just benefit a few people, but probably millions," he said. "However, pet cloning will still be a very meaningful part of our business because it brings hope to pet lovers."

Early next year, Guai Guai will be "reborn" in Sinogene's lab. Liu acknowledged that the new puppy will not actually "be" Guai Guai, but it will help with the grieving process.

"Guai Guai will always be in my heart, so I will name the puppy Guai Guai as a symbol of the continuation of our love," she said.