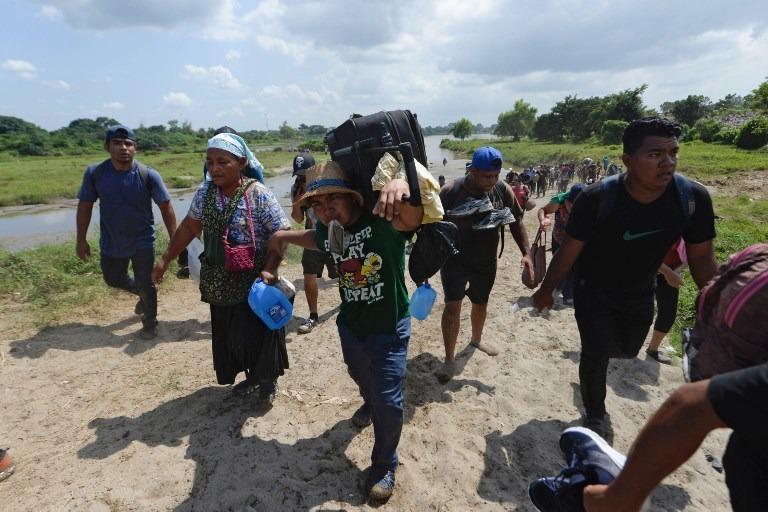 Salvadorean migrants heading in a caravan to the US, arrive in Ciudad Hidalgo, Mexico, after crossing the Suchiate River from Ciudad Tecun Uman, Guatemala, on Nov 2, 2018. (JOHAN ORDONEZ / AFP)

WASHINGTON – US President Donald Trump on Friday effectively suspended the granting of asylum to migrants who cross the US-Mexico border illegally, seeking fresh ways to block thousands of Central Americans traveling in caravans from entering the United States.

The order, which goes into effect on Saturday, means that migrants will have to present themselves at US ports of entry to qualify for asylum. US immigrant advocates rushed to court to try to block the policy.

I just signed the proclamation on asylum - very important. People can come in but they have to come in through the points of entry

"I just signed the proclamation on asylum - very important," Trump told reporters on Friday before leaving for Paris. "People can come in but they have to come in through the points of entry."

The order followed other rules unveiled on Thursday that sought to limit asylum claims.

Trump made his hard-line policies toward immigration a key issue ahead of Tuesday's midterm elections. He has vowed to deploy troops at the border to stop a caravan of mainly Honduran migrants, currently edging their way through Mexico.

Several hundred of the caravan started north again on Friday after a rest in Mexico City. Many of them have said they want to seek asylum in the United States, citing violence in their own countries.

Trump's proclamation said mass migration on the border had precipitated a crisis and he was acting to protect the national interest.

The order will be in effect for 90 days or until the United States reaches an agreement with Mexico allowing it to turn back asylum-seekers who had traveled through Mexico, whichever comes first.

READ MORE: Thousands of migrants headed towards US apply to Mexico for asylum

The lawsuit said the order violated the Immigration and Nationality Act, which allows anyone present in the United States to seek asylum regardless of where they entered the country.