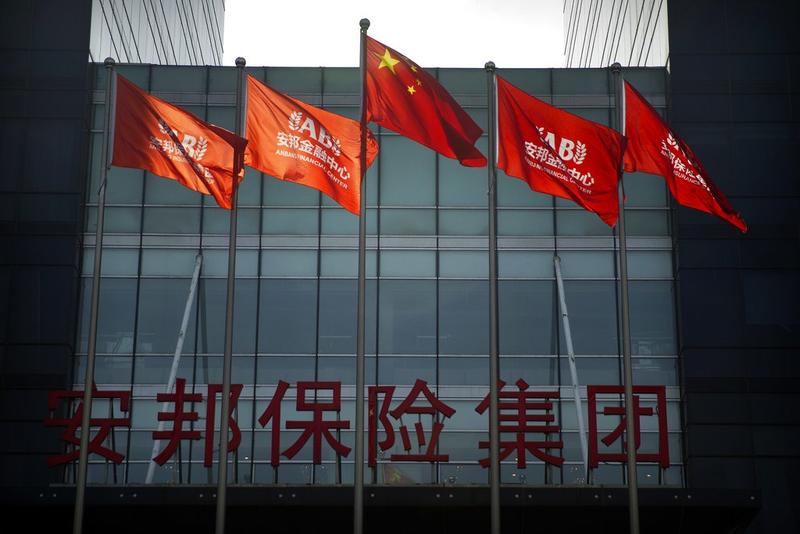 In this Feb 23, 2018 file photo, Chinese and corporate flags fly in front of the offices of the Anbang Insurance Group in Beijing. The founder of the Chinese insurer that owns New York City's Waldorf Hotel, Wu Xiaohui, went on trial on March 28, 2018 on charges of fraud and abusing his position for personal benefit. (MARK SCHIEFELBEIN / AP)

The trial concluded after nearly 10 hours at Shanghai No 1 Intermediate Court. No verdict was given.

Prosecutors charged Wu, 51, with fraudulently raising 65.25 billion yuan (US$10.4 billion) and abusing his post to benefit himself, according to a live report the court released on its social media account.

Wu was charged with fraudulently raising 65.25 billion yuan (US$10.4 billion) , embezzling 10 billion yuan in premiums and abusing his post to benefit himself

The funds, raised by ignoring capital limits set by regulators to oversell insurance products worth 724 billion yuan to 10.6 million investors, were transferred to companies he personally controlled for overseas investment, debt repayment and "personal squandering", according to the report.

Wu also was charged with embezzling 10 billion yuan in premiums paid by policyholders, a violation of insurance regulations, to ensure the cash flow of his other companies.

Wu contested all charges against him and said in court that he was ignorant of the law and unaware whether his activities had violated the law, according to the court report. However, he pleaded guilty in his final statement at the end of the trial.

Legislative representatives, journalists and some others including Wu's family members attended the trial.

Wu, who founded Anbang in 2004, was placed under investigation in June after a multibillion-dollar string of global acquisitions by the insurance and investment conglomerate prompted questions about how it paid for its buying spree, including the US$2 billion Waldorf Astoria purchase in 2015.

On Feb 23, Wu was removed as the group's head when the country's insurance regulator took control of the private insurer to protect its solvency and consumer rights. The China Insurance Regulatory Commission said the takeover had no effect on Anbang's financial obligations.

The working team was established by the regulatory commission and consists of officials from the People's Bank of China, the central bank, and banking, securities and foreign-exchange regulators.

Regulators have said good-quality private capital would be introduced to complete Anbang's share restructuring and its private ownership would be ensured, a process expected to last a year but possibly extended if need be.

During the annual national congress this month, officials unveiled plans to merge the nation's banking and insurance regulators to tighten supervision of financial risks.