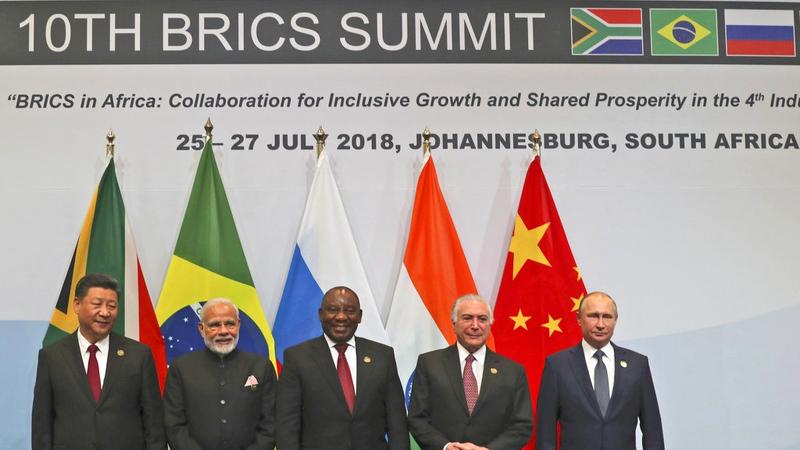 The leaders of emerging and developing countries attending the annual BRICS summit should send a collective message to Washington, letting it know they oppose disruptive protectionism, a group of experts said.

They said the leaders will seek consensus on modernizing their economies amid the ongoing worldwide technological revolution.

The group provided their analysis of the summit, which runs through Friday in Johannesburg, South Africa. Some other African countries also are attending.

Dennis Pamlin, a senior adviser at the Research Institutes of Sweden, said the world faces serious challenges from unilateralism, isolationism and protectionism, and needs a new vision and new structures to support the vision, including mechanisms aligned with the Belt and Road Initiative.

"The BRICS could claim that role in safeguarding the multilateral system," Pamlin said.

Shada Islam, an expert on Asia at the Friends of Europe think tank in Brussels, said: "The summit is a reminder that the world is changing fast and that the 'great powers' of today have to work with the emerging powers of tomorrow."

With the United States playing less of a role in the global multilateral system, Islam said the BRICS countries should work with the European Union to preserve and improve the rules-based global order.

Pamlin said the range of views among BRICS countries is not a weakness. Such a divergence makes the group's work more important as BRICS countries represent the opinions of a variety of emerging economies.

Luigi Gambardella, president of ChinaEU, a nonprofit organization, said the summit is being held amid a trade war. Leaders of BRICS countries urgently need to extend a message of unity as well as agreeing on some concrete measures.

In a multilateral world, BRICS countries play an important role and have witnessed closer trade ties and enhanced cooperation, he said.

"China is the engine of world growth and plays an essential role in BRICS," Gambardella said. "China has injected momentum into this grouping and will continue to be a main contributor to BRICS development."