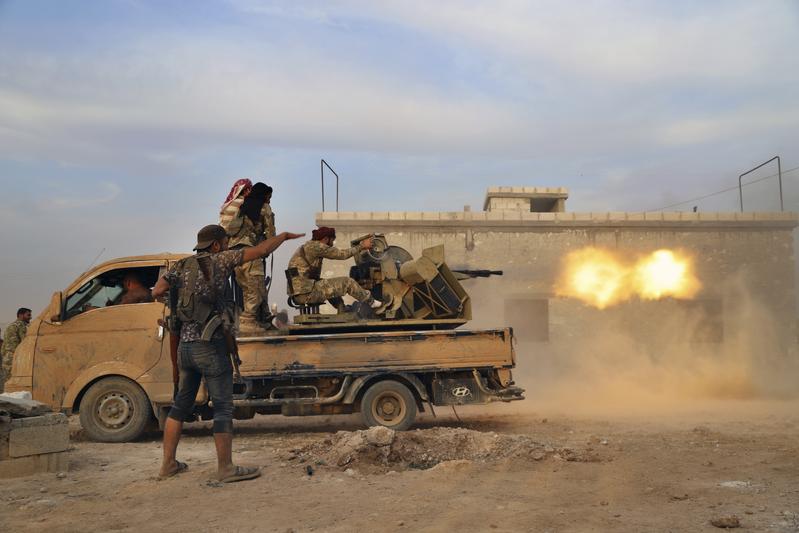 DAMASCUS — Bouthaina Shaaban, Syria's political and media advisor to the presidency, said on Thursday that the cease-fire reached between Turkey and the United States in northern Syria is "vague."

The US VP announced that the Turkish military operations will be paused for 5 days, adding the US will help facilitate an "orderly withdrawal" of Kurdish-led troops from what Turkey has termed as a "safe zone" on the Syrian-Turkish border

Her remarks came during a live interview with the pan-Arab al-Mayadeen TV aired in the evening, during which Shaaban said it is not yet clear about the prospects of the cease-fire agreement.

On Thursday evening, US Vice President Mike Pence said Turkey has agreed to a cease-fire in Syria, under which the Kurdish Syrian Democratic Forces (SDF) must dismantle their defensive fortifications and pull troops from the border area.

Following his meeting with Turkish President Recep Tayyip Erdogan on Thursday, Pence announced that the Turkish military operations will be paused for five days, adding the United States will help facilitate an "orderly withdrawal" of Kurdish-led troops from what Turkey has termed as a "safe zone" on the Syrian-Turkish border.

The cease-fire agreement comes a week after Turkey launched a crushing offensive to eliminate the Kurdish forces from border areas with Turkey and to resettle millions of Syrian refugees in the so-called "safe zone" that will be supervised by Turkey.

The desired Turkish safe zone is a 32-km deep running for 480 km along the Syrian side of the border.

In her interview, Shaaban said there is nothing called a "safe zone" as it is an occupation of Syrian territory by Turkey.

"Erdogan is an occupier of our land and he is an aggressor against our country," she said.

"We deal with any illegitimate foreign presence on our country as an occupation," the Syrian official added.

Asked whether Russia is mediating a new relation between Syria and Turkey which has been a staunch supporter of the Syrian rebels, Shaaban ruled out such a possibility, saying "there is no Russian mediation between the Syrian government and Turkey."

Meanwhile, Shaaban said the coordination between the Syrian government and its allies of Russia and Iran is "ongoing on a daily basis and there is complete trust between us."

Regarding the recent deal between the Syrian government and the Kurdish forces about the entry of the Syrian army to Kurdish-controlled areas in northern and northeastern Syria, the presidential advisor said "the steps ... are important."

Earlier in the day, the Syrian Observatory for Human Rights war monitor said as many as 300,000 civilians have so far been displaced since Turkey launched its long-threatened military campaign against the Kurdish forces in northern Syria on Oct 9.

The Britain-based watchdog said the Turkish forces and allied Syrian rebels captured around 70 areas and besieged the city of Ras al-Ayn in the northeastern province of Hasakah.

On Oct 9, Turkey and Syrian rebel groups started an assault to eliminate Kurdish forces in northern Syria in order to end what Turkey perceives as the threat of "terrorist and separatist" groups on its southern border and to impose a safe zone to host millions of Syrian refugees.

READ MORE: Trump leaves Turkey, Syria 'to argue it out'

With the gradual withdrawal of the US forces from northern Syria that took place in tandem with the Turkish attack, the Syrian army has moved to counter the Turkish offensive through assuming control of certain areas controlled by the SDF under a Russian-mediated deal between the Syrian government and the Kurdish fighters.

The Syrian army has so far deployed in the key city of Manbij in northeastern Aleppo near Turkey, as well as the town of Tall Tamr in Hasakah Province in northeastern Syria and the vicinity of the Ayn Issa town in the northern countryside of Raqqa Province.