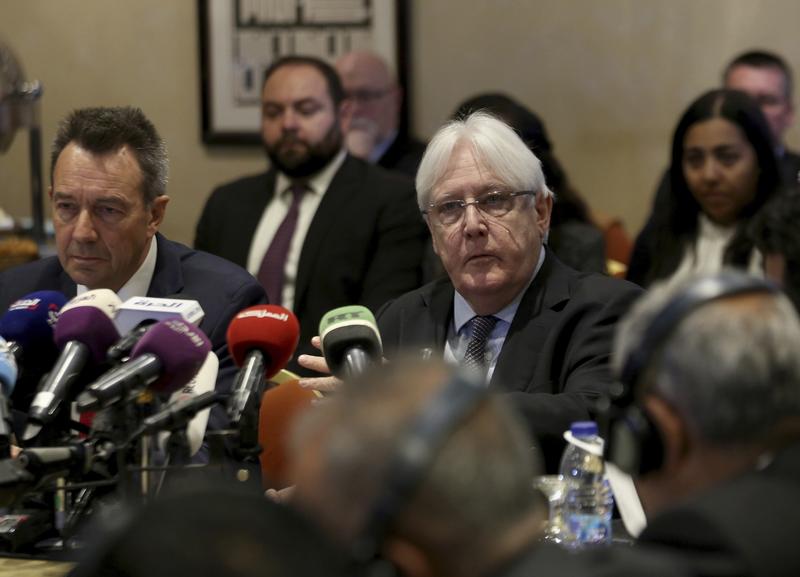 In this Feb 5, 2019 file photo, United Nations Special Envoy to Yemen Martin Griffiths, center, and President of the International Committee of the Red Cross Peter Maurer, participate in a new round of talks by Yemen's warring parties in Amman, Jordan. (RAAD ADAYLEH / AP)

The first phase of withdrawal will see Houthi forces pull back 5 km from the ports of Saleef, which is used for importing grains, and Ras Isa, an oil terminal for exporting Marib crude oil.

For the second phase of withdrawal, Houthi forces will withdraw 1 km from Hodeidah's main port, while the coalition-backed government forces will retreat 1 km from Kilo 7 area in the eastern suburbs of the port city.

Notably, the government forces have advanced into the southern and eastern outskirts of Hodeidah, after battles against the Houthi rebels over the past five months.

The withdrawal comes under the supervision of a UN-led cease-fire monitoring team headed by Michael Lollesgaard.

Hodeidah is the main lifeline entry of commercial imports and humanitarian aid to two-thirds of the Yemeni population.

The peace deal reached in Stockholm last December was meant to avoid the port city an all-out assault by the Saudi-led coalition forces and place it under the UN supervision.

The peace deal seeks to save more than 20 million Yemenis from sliding into mass starvation.

The move came amid international pressures and UN efforts led by the UN envoy to Yemen Martin Griffiths to push the warring parties to end the already four-year war.

Saudi Arabia is leading an Arab military coalition that intervened in Yemen in March 2015 to support the government of President Abd-Rabbu Mansour Hadi after Houthi rebels forced him into exile and seized much of the country's north, including the capital Sanaa and Hodeidah.

The civil war in Yemen has killed more than 10,000 people, mostly civilians, displaced 3 million others, and pushed the country to the brink of famine.