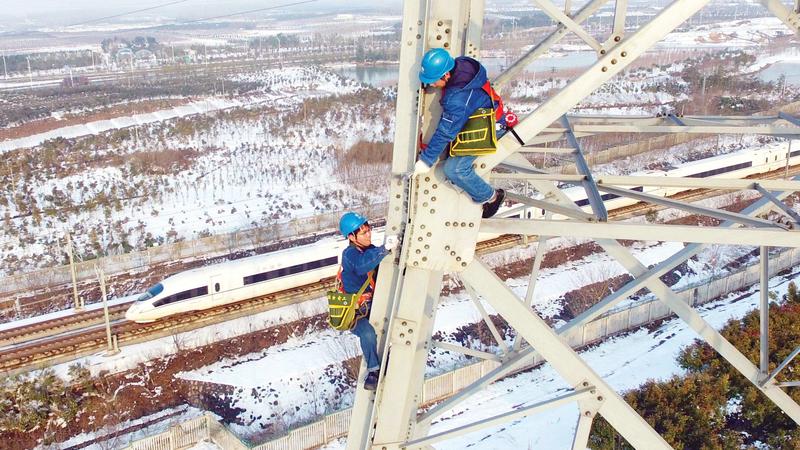 Workers carry out maintenance on electricity transmission towers in East China’s Anhui province on Jan 31. China has a huge demand for copper which is needed as an electricity conductor. The country is also a top global consumer of other base metals including nickel, zinc, aluminum and steel. (PHOTO / AFP)

The year 2017 was a bullish year for the global copper industry, with copper futures on the London Metal Exchange surging to a four-year high of US$7,313 per ton in December.

Steady economic growth in China has sharply increased electricity demand. This has pushed China to consume and import more copper as the red metal is an electricity conductor and is used for making wires, cables and batteries.

China’s massive demand — which accounted for about half of the world’s copper consumption — was cited as one of the key drivers behind the sharp rise in copper prices.

But China’s influence goes beyond the copper market. In fact, the country’s rise as the world’s second largest economy has made it not only a top consumer but also producer of various base metals including nickel, zinc, aluminum and steel.

Analysts and traders expect China will continue to determine base metal prices in the next few years as its growing economy sustains the demand for metals used for its various industries.

“We believe China will continue to drive the direction of the (global metal) industry and price movements, given the percentage of both supply and demand it holds across the major metals,” the New York-based credit rating agency Moody’s Investors Service said in a report in February.

Shivani Singh, Asia editor of the global metals news provider Metal Bulletin, said: “China is one of the largest producers and consumers of various base metals and will continue to play a defining role in (global metal) demand/supply dynamics.”

Even an easing economy will not limit China’s impact on the global base metals trade.

“China is still a growth market and is growing from a larger base than say 10 years ago. Chinese infrastructure investment (will continue to) impact demand/supply for industrial metals,” Singh told China Daily Asia Weekly.

Simona Gambarini, commodities economist at the London-based research firm Capital Economics, said the easing economy will not rein in China’s increasing demand for consumer goods, which in turn will feed demand for metals like zinc, lead and aluminum as they are used to manufacture cars and household appliances.

“China will remain the (world’s) largest buyer and producer of many metals and it will continue to set the direction of prices,” she said.

Guy Wolf, global head of market analytics at the London-based brokerage Marex Spectron, said China has a key role to play in the expected decade-long bull run for base metals.

The outlook so far this year for most industrial metals is positive. Latest reports issued in April by the Portugal-based International Metal Study Groups revealed sustained demand from China will support the global base metals market.

The International Copper Study Group (ICSG) forecast that refined copper demand would rise by 3 percent to 24.5 million tons this year. China’s infrastructure development is one of the major factors that will boost global copper demand.

“China will remain the biggest contributor to world growth in copper usage. Apparent demand in China is expected to increase by around 3.5 percent in 2018 and 2.5 percent in 2019,” the ICSG said.

The ICSG also expects China to be a key driver of this year’s estimated 4 percent growth in global refined copper production.

The International Lead and Zinc Study Group (ILZSG) estimates global demand for refined lead metal to rise by 2.7 percent this year to 11.90 million tons on increased US and Chinese consumption. China’s demand is seen to grow by 3.4 percent.

The ILZSG forecast global demand for refined zinc metal to rise by 2 percent to 13.97 million tons in 2018 on the back of increased usage in the US, Europe and China. China’s zinc demand is forecast to increase by 2.2 percent.

The International Nickel Study Group said China’s nickel pig iron (NPI) production, which rebounded in 2017, is expected to increase further in 2018 thanks to higher supply of Indonesian nickel ore. NPI, made of low grade nickel ore, is used in the manufacturing of stainless steel.

BMI Research, a unit of financial information services company Fitch Group, expects China to remain the driving force in global aluminum production, accounting for about 58 percent of total output over the coming years.

BMI forecast China’s aluminum output to grow from 34.2 million tons in 2018 to 36.8 million tons by 2021, or an average 2.7 percent annual growth. Demand, meanwhile, is seen growing at an average annual rate of 3.9 percent during the same period.

One of the key sectors of the Chinese economy that is expected to lead metal consumption is renewable energy. This is in line with the nation’s emerging role as an environmental leader after the US decided to withdraw from the Paris Agreement on climate change.

The Chinese government’s push to promote clean energy has increased the production and consumption of EVs and renewable energy technologies. Gambarini of Capital Economics said this will raise Chinese demand for metals like nickel, silver, copper and cobalt as these are used to make batteries, electric cars and solar cells.

Jerry Tsui, managing director at BAIC Group Industrial Investment, expects sales by the group’s EV unit Beijing Electric Vehicle Company to surpass 150,000 units this year, an increase of more than 40 percent from 2017. This, he said, will push up the car manufacturer’s demand for metals like cobalt, nickel and lithium which are used to manufacture batteries. High-powered recharging systems will also require more copper.

Committing to the Paris Agreement not only contributed to an increase in China’s domestic demand for metals. As more than 170 countries signed the agreement, their commitment to cut carbon emissions is seen increasing the demand for renewables globally.

And China, which is a top metal producer, stands to gain as a key supplier of the metals needed for renewable energy technologies.

The World Bank said in its June 2017 report The Growing Role of Minerals and Metals for a Low Carbon Future that China’s production and reserves of both base and rare earth metals are even bigger than other resource-rich countries such as the US, Canada and Australia.

Apart from accounting for half of refined copper production, China is also a key producer of bauxite, cadmium and aluminum.