In this Aug 26, 2019 photo provided by New Zealand Customs, shows electric motors found in a container from Thailand with 469 kilograms of methamphetamine concealed in the motors. (PHOTO / NEW ZEALAND CUSTOMS VIA AP)

WELLINGTON, New Zealand — New Zealand authorities said Friday they found more than a half ton of methamphetamine hidden inside a shipment of 60 electric motors from Thailand.

Customs Investigations Manager Bruce Berry told The Associated Press they believe a sophisticated Canadian drug cartel is behind the shipment. He said they had tracked two Canadians for several months who they believe were sent separately to New Zealand to collect and sell the drugs.

Two Canadian men in their mid-20s and one New Zealand man have been arrested and charged with importing and possessing methamphetamine. They each face a maximum sentence of life imprisonment if convicted.

Berry said international criminal organizations currently have a glut of drugs and are looking for new markets. He said New Zealand has proved attractive to them because meth sells on the streets here for a higher price than just about anywhere else in the world.

In this Aug 26, 2019 photo provided by New Zealand Customs, shows a bag of methamphetamine found in a container from Thailand with 469 kilograms of methamphetamine concealed in electric motors. (PHOTO / NEW ZEALAND CUSTOMS VIA AP)

Part of the reason for that is the country's isolated location.

Berry said the latest case seemed to follow a playbook used by the cartels, in which a front company is set up in New Zealand and then a shore party arrives, uses Airbnb accommodation, rents storage units and tries to collect and sell the drugs before sending the money back overseas.

"Whatever we do, these syndicates are going to try to push their poison onto our communities," Berry said.

In the latest case, customs officials say they seized 469 kilograms of meth with a street value of 235 million New Zealand dollars (US$150 million) at the Ports of Auckland from the motors that arrived inside a shipping container in mid-August.

Berry said that was equivalent to the total amount of meth consumed in New Zealand over six months, and that the seizure had put a significant dent into supplies of the drug. 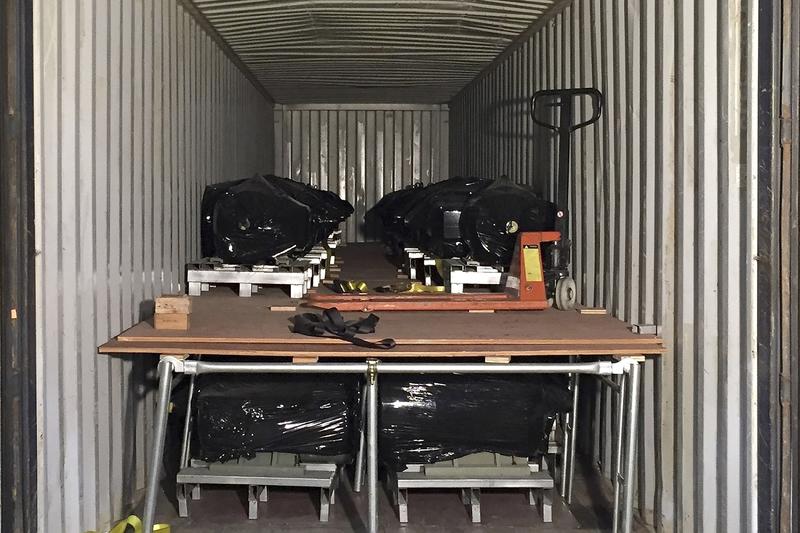 In this Aug 26, 2019 photo provided by New Zealand Customs, shows a container with a shipment of electric motors from Thailand with 469 kilograms of methamphetamine concealed in the motors. (PHOTO / NEW ZEALAND CUSTOMS VIA AP)

He said New Zealand had used its Five Eyes intelligence-sharing partnership with Canada, the US, Britain and Australia to help with the investigation. He said more arrests were likely in New Zealand and possibly in other countries as well.

Berry said authorities had also seized a gun and cash after executing search warrants around Auckland.

The bust represents the largest-ever border seizure of meth in New Zealand. It was slightly smaller than a 2016 haul that police found in a van and buried in sand dunes after a group used a boat to bring the drugs ashore.