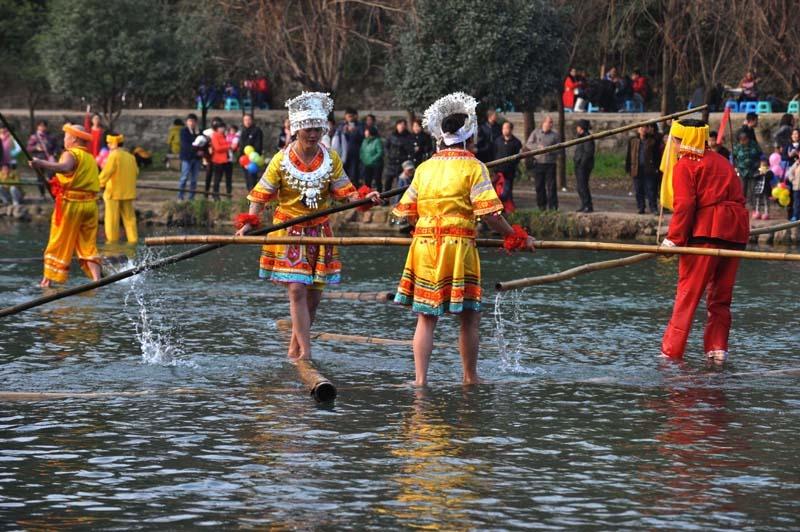 Some members of the Miao ethnic group in Guiyang, Guizhou province, perform bamboo drifting during a festival. (PHOTO / CHINA DAILY)

A video posted online caused a stir recently, revealing the little-known Guizhou art of bamboo drifting. In just under a dozen hours after appearing on social media behemoth Facebook, the video had received 170,000 views and 4,600 likes.

The fascinating video, entitled Dancing on Water: The Chinese Art of Bamboo Drifting, was posted by Great Big Story, a video platform created by CNN.

The video shows people in Miao ethnic dress balancing on thin poles of bamboo, bobbing along the Chishui River in Guizhou province. However, not only do these people balance on these precarious poles, they also dance, perform, and play sports.

"When I first saw it, I felt it was so unique," says Kang Xiaobing, in the video. The 74-year-old is the president of the Zunyi Single Bamboo Drifting Association.

"Standing on a piece of bamboo on the ground is already not easy－not to mention doing it on water," Kang says. "So, I went out to try it and fell in love with it."

Bamboo drifting maybe be an oddity to the outside world, but to the Miao people and others in the province, it has been a unique, useful and entertaining part of their culture for more than a thousand years.

During the Qin Dynasty (221-206 BC), the Bozhou district of Zunyi city was famous for its production of nanmu, a rare type of lumber and the most precious and expensive wood at the time, thanks to its warm olive-brown color and fine quality. As such it was in great demand by the royal court more than 2,000 kilometers to the north, in the former ancient capital of Xianyang in Shaanxi province.
Logistically this presented a bit of a problem. There were no viable means of transportation along the Chishui River, the first part of the journey from the nanmu forest in Bozhou.

This brought about a creative and crafty solution. For a handsome reward, Guizhou locals were tasked with bringing one log each down the Chishui. But there was one catch. They had to stand on their log as it drifted down the river, guiding it toward its next stop, the Yangtze River. From there the logs could be loaded onto boats and sailed north to the capital.

In the many decades that passed, the sight of a man standing on top of a great nanmu log floating along the Chishui became commonplace in Guizhou. 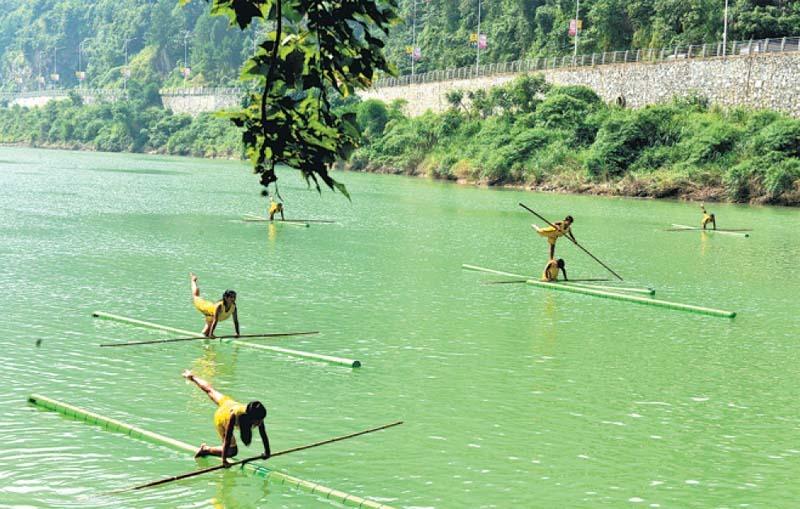 As the Qin Dynasty drifted into the Han (206 BC-AD 220), the competitive spirit of the Guizhou locals came to the fore. Riders challenged each other to vault from log to log, compete in balancing acts, and take part in feats of strength－all while buoyantly balanced on the timber. And so, wood drifting was born.

Later still in the Qing Dynasty (1644-1911), the trends in materials began to change with bamboo gaining favor, and so, wood drifting became bamboo drifting.

As bamboo is a much cheaper material than nanmu, the drifting games really got rolling. Every year, communities in Guizhou, particularly Miao, but other ethnicities as well, began flocking to the dragon boat festival. As well as watching the traditional river races, they also started competing in bamboo drifting competitions. The winners would be garnered with fame, flowers, tea and wine－while the losers would entertain the crowds with their splashy turns.

Today, bamboo drifting is gaining popularity in Guizhou, with younger generations taking it up, with increasingly innovative and creative performances being staged.

The sport has even become enshrined in the National Traditional Games of Ethnic Minorities, a contest which takes place every four years involving traditional games played by all 56 Chinese ethnicities.

To the rest of the world bamboo drifting remains an entertaining anomaly, and an interesting aside.

"This is one of the best things ever," says Glenda Spivey after watching the video posted to Facebook. Another user, Geri Hallisy, says, "Awesome, beautiful, talented, amazing!"