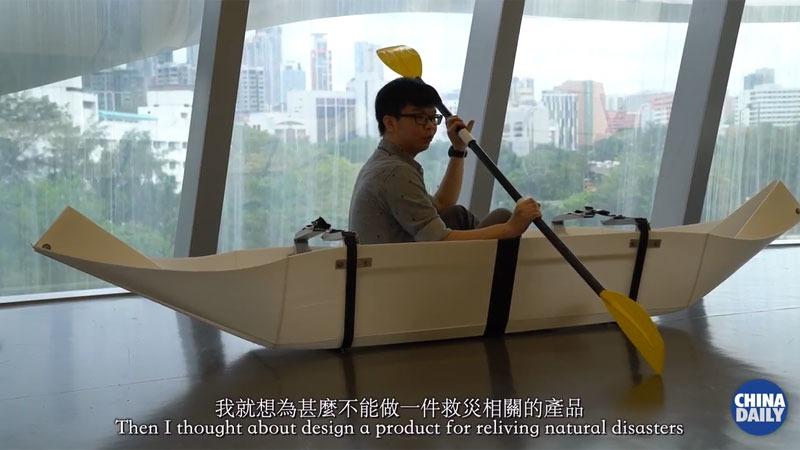 People in flood-affected areas can protect themselves against flooding thanks to a new design by a Hong Kong student.

Named POD, the furniture can be turned from a seating bench into a two-seater lifeboat in a flood emergency within one minute by unlocking two safety buckles and extending two folded ends.

Lo Kin-pan, a product design student at the Hong Kong Polytechnic University, spent about half a year to conceive and design the device. The design was listed in the International Top 20 in 2018 James Dyson Award this November.

The 25-year-old took his inspiration from life-threatening floods that can plague Hong Kong during tropical storms.

To make his design more practical, he visited villages that had experienced storms and floods. He watched videos about flooding scenes, and studied cases from the Philippines, which is prone to violent tropical storms and secondary disasters such as flood almost every year.

Considering that a lifeboat is not a daily necessity and occupies much space, Lo came up with the idea of combining the lifeboat with furniture design, so that people could accept it more easily.

Lo also learned that the underprivileged ones are more likely to be affected by floods. Controlling the cost of materials and making the device affordable is one of his considerations. The cost of the device is about HK$200-300.

Apart from low cost, the materials also need to be durable and lightweight. As the device is foldable and the two ends of the device need to be quickly extended to turn into a lifeboat.

After searching for several months for the proper materials, he applied 5mm polypropylene plastic board, aluminum frame and nylon belts in his design.

The young designer hopes the POD can be improved with lighter materials and lower costs in the future, and he wishes governments or non-governmental organizations will find the device useful and distribute them to those in need.

Yang Zekun contributed to the story