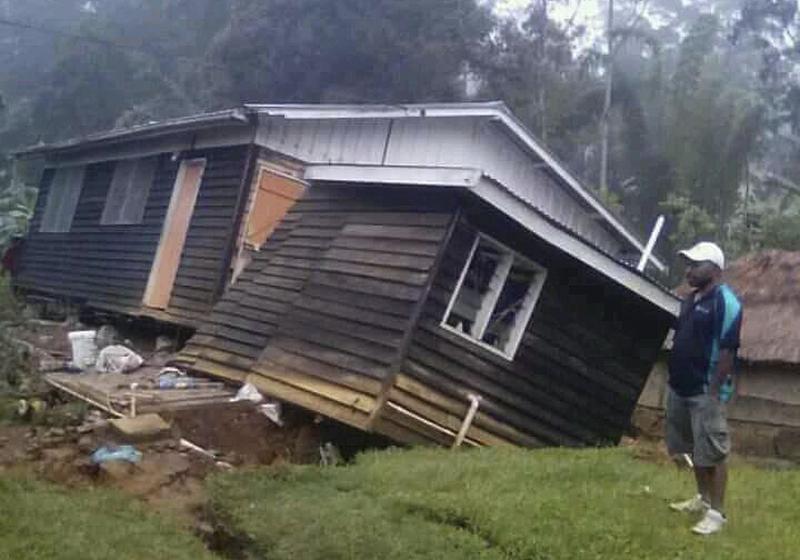 A man views a house that collapsed in a strong earthquake, Feb 27, 2018, in Halagoli, Hela Province, Papua New Guinea. Severe damage after Monday's powerful 7.5 magnitude earthquake in Papua New Guinea is hindering efforts to assess the destruction, although officials fear dozens of people may have been injured or killed. (JEROL WEPII / AP)

Stymied by forbidding terrain and weather, as well as damaged roads and runways, aid has not yet arrived in several large towns where it's most needed, local officials told Reuters.

"The only means of rescue is through helicopters and they are hardly coming," Hela province's administrator, William Bando, said on the phone from his office in a shipping container at Tari, about 40 km (25 miles) from the epicentre.

"Our people live in scattered hamlets and people are dying slowly...A lot of people are asking for tents, water and medical supplies."

The emergency declaration, made late on Thursday by Papua New Guinea Prime Minister Peter O'Neill, cleared the way for 450 million kina (US$135 million) in government aid to flow, as well as help from the military.

"This is an unprecedented disaster and the appropriate response is underway by the national government," O'Neill said in a statement, which also announced that a restoration authority would direct recovery efforts for the next four years.

At least 13 people died when landslides covered remote hamlets close to where the quake struck, some 560 km (350 miles) northwest of the capital, Port Moresby, an official who put the total death toll at 31, told Reuters on Thursday.

While the region has no major urban centres, around 670,000 people live within 100 km (62 miles) of the epicentre according to the Red Cross.

Most of the other confirmed fatalities were in or around Tari township and provincial capital of Mendi, where at least 14 people died and aftershocks continue to frighten residents. 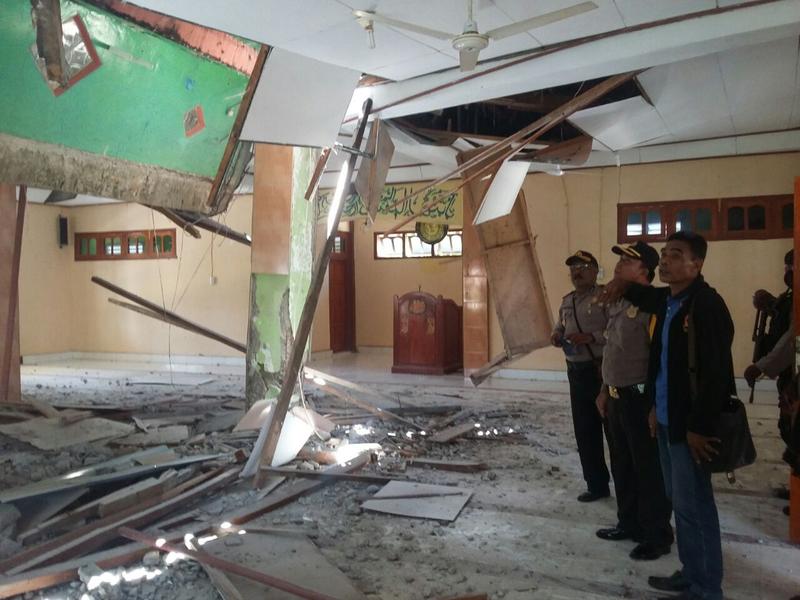 In this photo released on Feb 27, 2018, by Indonesia's National Disaster Mitigation Agency (BNPB), local officials inspect the damage to a mosque following monday's powerful earthquake in neighboring Papua New Guinea, in Boven Digoel, Papua province, Indonesia. Severe damage to phone networks and roads from the earthquake in Papua New Guinea was hindering efforts to assess the extent of the destruction Tuesday, although officials in the remote central region fear dozens of people may have been injured or killed. (PHOTO / AP)

"People have started to dig out and to recover dead bodies still in the ground," Mendi policeman Naring Bongi said from his station, where desktop computers were smashed when the quake hit.

"There is no help except for those who are here going around and collecting information on casualties and such things," he said.

"Our state of mind is not great. We are confused as to what is to be done to us in this case...the earth is still moving - it really frightens us, so we don't know whatever to do, all the services in Mendi have closed."

The International Federation of Red Cross and Red Crescent Societies said it released US$221,000 in funds to help relief efforts and would send first aid, water, mosquito nets and shelters, to the region.

Australia has also promised A$200,000 in aid, sent a C-130 military plane to help with aerial surveys, and a spokeswoman at the foreign ministry told Reuters more help is on standby, should PNG request it.

Miners and oil and gas companies were also assessing damage to their infrastructure, and an industry source said ExxonMobil Corp has declared force majeure on exports from its Papua New Guinea liquefied natural gas (LNG) project, which has been shut since the quake hit.

The company declined to comment on the declaration, but said it would "take time" for a full survey of damage, given the quake ruined roads and other infrastructure.

Earthquakes are common in Papua New Guinea, which sits on the Pacific Ocean's "Ring of Fire," a hotspot for seismic activity due to friction between tectonic plates.