By Gu mengyan in Hong Kong 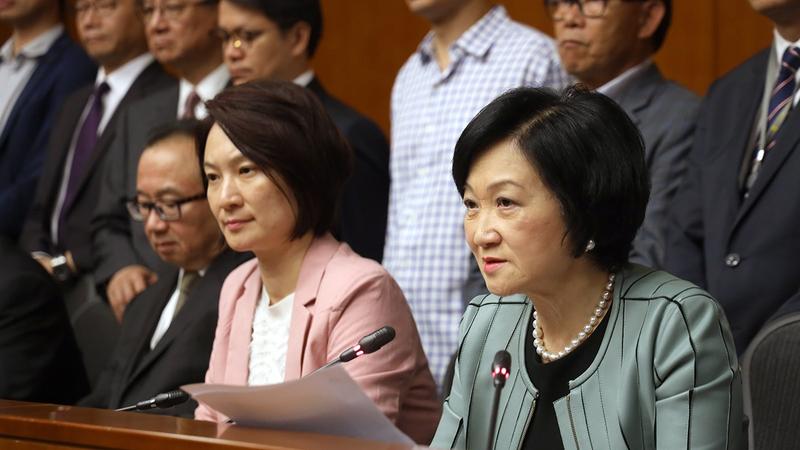 A functioning legislature is what Hong Kong needs most as the city is experiencing considerable hardship brought about by months of anti-government protests, city leaders argued after Chief Executive Carrie Lam Cheng Yuet-ngor was blocked by opposition lawmakers from delivering her annual policy speech at the Legislative Council on Wednesday.

After delivering the Policy Address in a pre-recorded video, Lam said at a news conference that cooperation from LegCo was key to implementing policies. Such support is especially important when facing the economic downturn, she added.

In her third Policy Address, Lam put forward 220 initiatives to lift the city out of the current quagmire. Latest statistics show Hong Kong’s economy only grew by 0.5 percent year-on-year - the worst performance since the 2009 recession, Lam said.

Lam urged all lawmakers, especially those from the opposition camp, to put aside political disputes and show more concern for local residents.

At a press briefing, Leung expressed “regrets” over the incident. He said lawmakers have a duty to maintain the integrity and order of the legislature; they are also obligated to listen to the Policy Address, which is vital to Hong Kong’s development.

In the face of unprecedented difficulties, the public of Hong Kong want to see a functioning legislature where lawmakers across the political spectrum serve in a rational manner, he said.

Leung noted that it has been four months since the legislature held its last meeting before it was forced into an early summer recess on July 1, after the premises were extensively vandalized by violent mobs.

Martin Liao Cheung-kong, convener of the pro-establishment lawmakers, said the actions of opposition members were “shameful” and “unforgivable” in undermining the public’s right to listen to the government’s plans.

It is one of the most important speeches of the year which all lawmakers have the responsibility to listen to and offer advice, Liao stressed.

Mak said no one in Hong Kong would like to see such aggressive behavior inside the legislature.

Starry Lee Wai-king, chairwoman of the Democratic Alliance for the Betterment and Progress of Hong Kong, urged opposition lawmakers to stop obstructing the legislature’s operations and keeping it from fulfilling its duty of addressing public concerns.

“If the legislature failed in its mission to solve problems facing the public, what else was it good for?” she questioned.

Lam is expected to attend a question-and-answer session at LegCo on Thursday (today) to shed more light on her latest address.

Li Bingcun contributed to this story.