Friends and allies in war and peace

Chinese and US pilots and their families remember a shared commitment to defeat the Japanese and end their wartime occupation of China, as Zhai Xiang, Xu Xiaoqing and Wang Cong report for Xinhua.

Nell Calloway, granddaughter of the late United States' General Claire Lee Chennault, remembers her grandfather as a gentle, ordinary man with a beautiful garden and a love of storytelling.

Calloway was 8 years old when Chennault died. It was only later when she saw a photo of him in military uniform that she began to understand that her "ordinary" grandfather had lived an extraordinary life.

Calloway is now director of the Chennault Aviation and Military Museum in Monroe, Louisiana. The museum is the only one in the United States dedicated to Chennault's heroic deeds and the history of the American Volunteer Group, the air corps that fought alongside the Chinese against Japan during World War II.

"Many Americans seem to have forgotten that China and the United States were close friends in the fight against Japan," Calloway said. "I hope my work helps remind others of this important relationship."

China was the first nation to fight the Japanese. The struggle started on Sept 18, 1931, when Japanese troops began their invasion of Northeast China.

On July 7, 1937, Japanese troops attacked the Lugou Bridge, also known as the Marco Polo Bridge, on the southwestern outskirts of Beijing, signaling the start of a full-scale invasion.

In 1941, close to 300 young US nationals registered to join the AVG and departed for Asia.

Organized and commanded by Chennault, the AVG was a volunteer band of pilots and ground staff whose sole purpose was to help China fight the invading Japanese troops before the United States officially entered the war.

They came to be known as the "Flying Tigers". 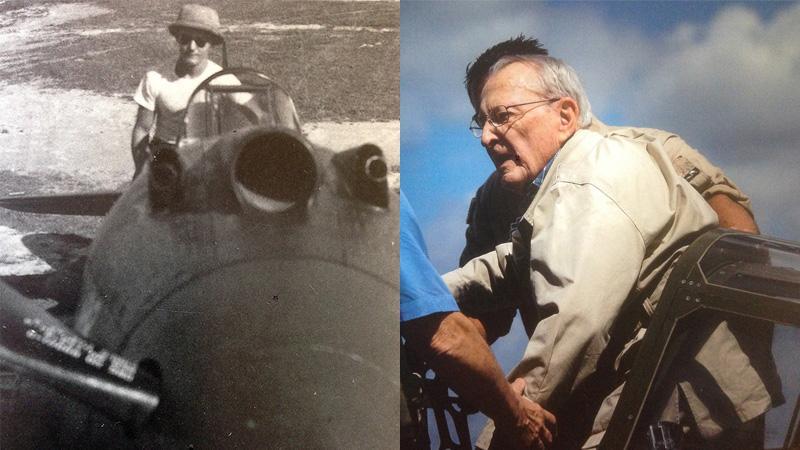 (Left) Frank Losonsky during his days as a member of the Flying Tigers in China. (Right) Losonsky climbs out of the cockpit of a P-40 in Atlanta, Georgia, last year. (Photo provided to China Daily)

Friends in life and death

While visiting his son in Los Angeles in 2000, Zhou Bing, a retired official at the Civil Aviation Administration of China, saw an old friend on television. Staring back at him from the television set was Dick Rossi, Zhou's copilot during WWII. The two men had not seen each other for more than half a century.

Rossi, from California, was enrolled in the electrical engineering program at UC Berkeley at the outbreak of WWII. In his memoirs, he wrote that though he saw the flight-training notices plastered all across campus. "I never really dreamed I would be able to make it," he wrote.

Rossi signed up for the AVG in 1941, and arrived in China as a pilot. On Dec 20, the AVG had its first air battle in China, shooting down nine Japanese bombers that attacked Kunming, the capital of the southwestern province of Yunnan.

In just seven months, the AVG shot down 299 planes during more than 50 battles against the Japanese, forcefully defending critical air space on China's rear front.

Rossi achieved ace pilot status with 6.25 confirmed victories during his service with the AVG. After the AVG was disbanded in early July 1942, Rossi continued to defend China as a pilot with the China National Aviation Corp. That was where he met Zhou.

In 1944, after graduating from National Southwestern Associated University in Kunming, Zhou entered CNAC. He was tasked with transporting supplies between India and China on a dangerous, but vital, airlift route over the Himalayas, known as the "Hump".

The Himalayan route was the Allies' primary means of delivering supplies to China after Burma fell to the Japanese. The Burma Road, which connected Lashio in northern Burma to Kunming, was cut off in 1942 by the invasion.

The legendary air route was opened through joint endeavors by Chinese and US pilots.

Due to the extreme altitudes, unforgiving topography and bad weather, Zhou's route over the Himalayas was a perilous one. Hundreds of planes crashed along the route: more than 1,500 Chinese and US pilots died or were reported missing attempting to bridge the gap between the Allies and the Chinese.

After Zhou saw Rossi on television, his son promptly contacted the Rossi family. Zhou was amazed to learn that Rossi and his family still lived in Southern California. The two long-lost friends quickly arranged a meeting.

Zhou's son, Zhou Jisong, was delighted to have an opportunity to learn more about his father's past. "My father always kept a low profile about his WWII service," he said. "I never heard much about it. Not until that meeting.

"I learned that my father was studying in Kunming at the time," he said. "He was a hot-blooded young man, and the Japanese bombing of Kunming made him feel he needed to contribute to China's resistance. He didn't want to see China become a conquered nation."

In 2005, Rossi was invited to Beijing to celebrate the 60th anniversary of the end of WWII. He was seated at the top table with the then-president Hu Jintao. Hu shook Rossi's hand and in an emotional tribute to the aid the US provided during WWII said he hoped the friendship between the peoples of China and the US would last forever.

"The Chinese leaders came around to toast him," said Lydia, Rossi's wife and executive secretary of the Flying Tigers Association. "The Chinese people have never forgotten us. We were incredibly touched by their gratitude every time we visited China.

"After reconnecting with Rossi, he (Rossi) and my father met with each other almost every year," Zhou Jisong said.

Zhou Bing and Dick Rossi died in 2007 and 2008 respectively, but their stories endure as reminders of the close historical partnership between China and the US. 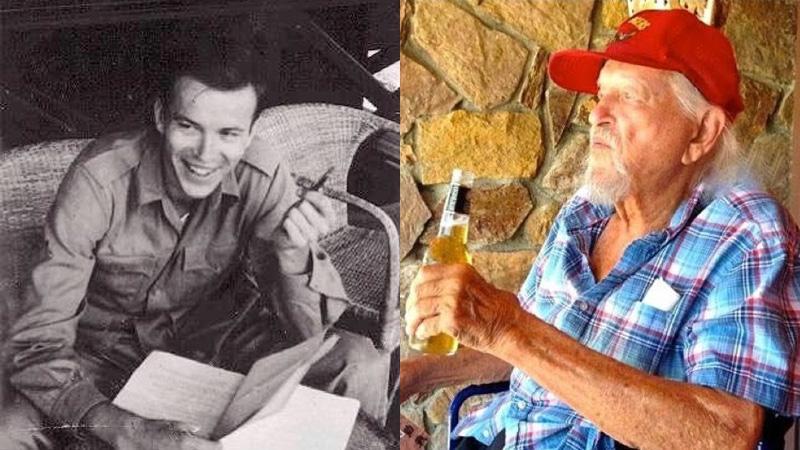 More than seven decades have passed since nearly 300 Flying Tigers arrived in China and wrote a legendary chapter in China-US relations.

Now, most of them have already died - not in battle - but of old age.

Losonsky was both a pilot and mechanical specialist when he arrived in Asia in 1941 at age 21. He was the youngest crew chief with the Flying Tigers, responsible for maintaining the shark-nosed P-40 fighters.

"I love Chinese people. They have pure hearts," Losonsky said, when he spoke with Xinhua. "It was dangerous in China, but I was happy to be there."

After returning to the US, he worked for General Motors and later ran three restaurants and a catering service. He also worked with his son, Terry, to publish his wartime diary.

Only once after WWII did Losonsky climb back inside a P-40. During a Flying Tigers reunion in Atlanta last year, he accepted a flight in a P-40, which performed two barrel rolls.

"I felt OK. No problem at all," he said afterward.

He always wanted to tread Chinese soil once again. His wish came true in 2015, when he was invited to visit for the Victory Day parade in Beijing, and was also made an honorary citizen of Kunming.

"China has changed so fast and so much," he said, adding that the places he lived in the 1940s were now unrecognizable.

"I am extremely excited about the progress China has made. I am sorry for the atrocities caused by the Japanese back then. The Chinese people were resolute in defeating them."

Brown attended Michigan State University until 1939, when he suspended his studies to join the US Navy. During his training in Florida, he became one of only a few pilots who could land a plane on an aircraft carrier at night.

In 1941, after being introduced to the AVG by friend Tex Hill, who became one of the AVG's ace pilots, Brown signed up for the unit and won an honorable discharge from the navy.

"Most of those pilots were just two to three years out of high school," Brown recalled.

"In Burma in 1941, the alert status was especially high. There was one rather heart-pounding experience; we had never employed a P-40 at night."

One night when Brown's squadron was guarding the Burma Road, the noise of trucks echoed around, sounding like a squadron of bombers with unsynchronized engines.

"So we had our big bomb alert and everybody took off because of the truck noises," Brown said of the false alarm.

He recalled a real alarm that happened during a mission in May 1942 when a plane being flown by an AVG pilot plane exploded by his wing: "I was thankful to have gotten back after that tragic encounter."

After the AVG disbanded, Brown spent three months training Chinese pilots, before becoming a pilot for CNAC. In total, he clocked up more than 1,000 hours over the Hump. He also flew airships across the Atlantic from New Jersey to West Africa and then India at least three times.

In 1945, he returned to the US, resumed his undergraduate studies and graduated in 1946. He went on to receive his medical degree in the 1950s and gained a doctorate in law in the 1980s.

For Brown, the horrors of WWII illustrate how desperately the world needs nonviolent solutions to interpersonal conflicts, and he pursued his degrees in this spirit of peaceful resolution, he said.

Brown will celebrate his 100th birthday in December.

(Left) Claire Chennault, the founder of the American Volunteer Group, aka the Flying Tigers. (Right) Zhou Bing, a Chinese pilot with the National China Aviation Corp, drinks Coca-Cola during a flight in WWII. (Photo provided to China Daily)

"I was glad to serve the Chinese people," Jay Vinyard said.

Vinyard joined the US Army Air Forces in 1942. In 1944, he was assigned to fly the Hump, ultimately completing 87 successful missions. Prior to the 2015 Victory Day parade in Beijing, President Xi Jinping awarded Vinyard a medal for his service.

"With several other WWII veterans, I was seated on the same level as President Xi to watch the parade," Vinyard said. "I am deeply impressed by what China has achieved."

All these years later, it is clear that the pilots' contributions were not made in vain.

"The Chinese people and the American people can work together to make the world a better place," Vinyard said.

Losonsky added, "China's role was instrumental in the Allied victory in WWII."

Although China's contribution to WWII has often been undervalued, a growing number of people are pointing out the huge sacrifices that were made and will not be forgotten.

"Memories of WWII have faded," said Rana Mitter, professor of history and director of the China Center at the University of Oxford in England.

"But let's not forget that China held off the Japanese forces. If China had surrendered, WWII would have ended differently."