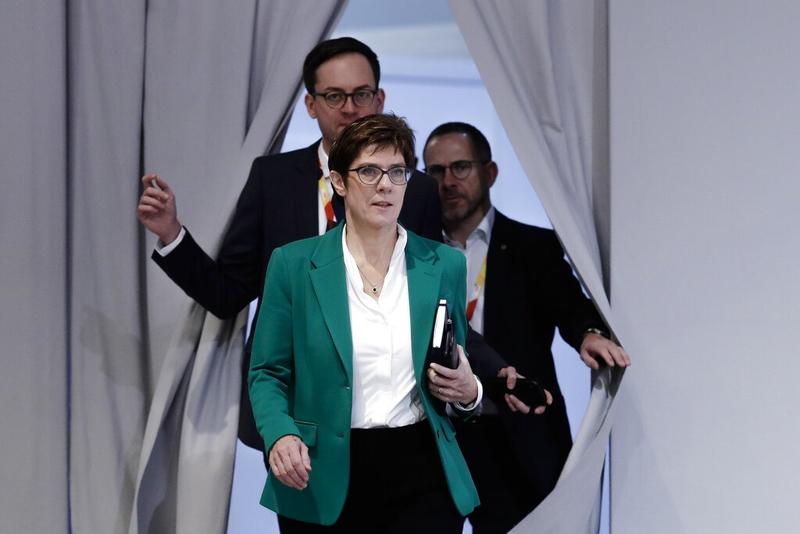 BERLIN — The leader of German Chancellor Angela Merkel's party has backed French President Emmanuel Macron's recent call for a stronger European Union, but suggested some solutions that are unlikely to be welcomed in Paris.

In an op-ed published by German weekly Welt am Sonntag, Annegret Kramp-Karrenbauer responded directly to Macron's appeal Monday for voters to reject populist parties in this year's upcoming European Parliament elections and instead support parties that want to strengthen the bloc.

Contrasting what she called the "European way of life" with the social and political models of China, the United States and Russia, Kramp-Karrenbauer said the answer could only be: "Europe must become stronger."

The op-ed, which was released to media Saturday, contains proposals for tackling challenges including populism, economic uncertainty, international security and migration. Not all of them will find favor in France.

Kramp-Karrenbauer called for the EU to have a permanent seat on the UN Security Council — where France currently has its own — and suggested that the European Parliament should focus its work in Brussels, rather than regularly hold sessions in Strasbourg, France, as well.

The 56-year-old, who succeeded Merkel as leader of the ruling Christian Democratic Union in December and is considered the front-runner to follow her as chancellor, also rejected Macron's proposal for an EU-wide minimum wage and made clear that Germany won't take responsibility for other countries' public debts.

Kramp-Karrenbauer, who was governor of Germany's state of Saarland on the border with France for six years, suggested a Europe-wide "pact for climate protection" that would involve consulting all parts of society to ensure it has the broadest possible support. The idea mirrors Macron's efforts to engage in a dialogue with voters angered over a recent fuel price hike.

She also expressly agreed with Macron on the need for the EU to better protect its external borders and said Europe should try to shape a version of Islam that's compatible with its values.