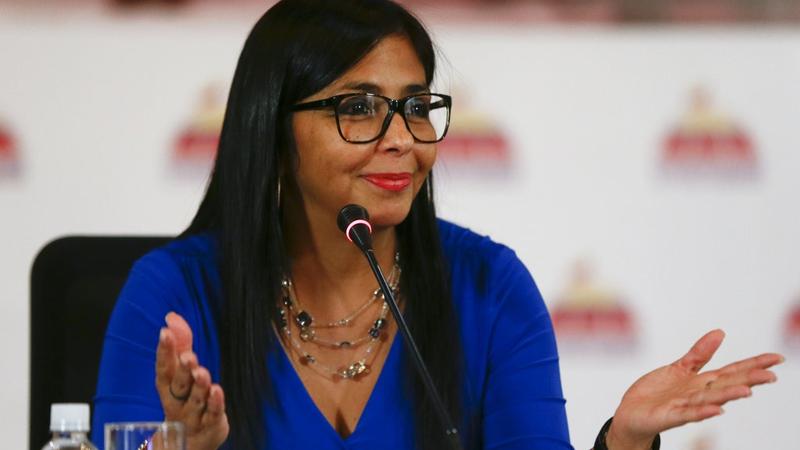 In this Aug 28, 2017 file photo, Delcy Rodriguez, then president of the Constitutional Assembly, gives a press conference in Caracas, Venezuela. (RICARDO MAZALAN / AP)

CARACAS - The Venezuelan government on Monday "categorically" rejected new sanctions by the European Union (EU) against 11 of its officials.

In a statement, the foreign ministry called the EU measures a "clear intervention into sovereign affairs."

In a statement, the foreign ministry called the EU measures a "clear intervention into sovereign affairs."

On Monday, EU foreign ministers sanctioned 11 Venezuelan officials, banning them from traveling to the European bloc and freezing any of their assets under EU jurisdiction.

The list of affected officials is led by Vice-President Delcy Rodriguez and former Vice-President Tareck El Aissami. Other leading figures are the vice-president of the National Electoral Council (CNE), Sandra Oblitas, and its director, Socorro Hernandez.

Venezuela warned that it "will not accept threats from any power" and reiterated that it is a "sovereign and independent" nation.

"The European Union is attacking political peace in Venezuela by interfering in its internal affairs and insisting in applying coercive measures which harm the peace and dialogue between Venezuelans," it wrote.

The statement also denounced the EU for its "subordination" to the US government of President Donald Trump, which has issued a number of financial sanctions against Venezuela.

"The multipolar world expects independence in the behavior of the European Union, faced with the evidence and danger of the resurgence of unilateralism," continued the statement.

In January this year, the EU issued statements against the president of the National Constituent Assembly (ANC), Diosdado Cabello, attorney-general, Tarek William Saab, and president of CNE Tibisay Lucena, among others.