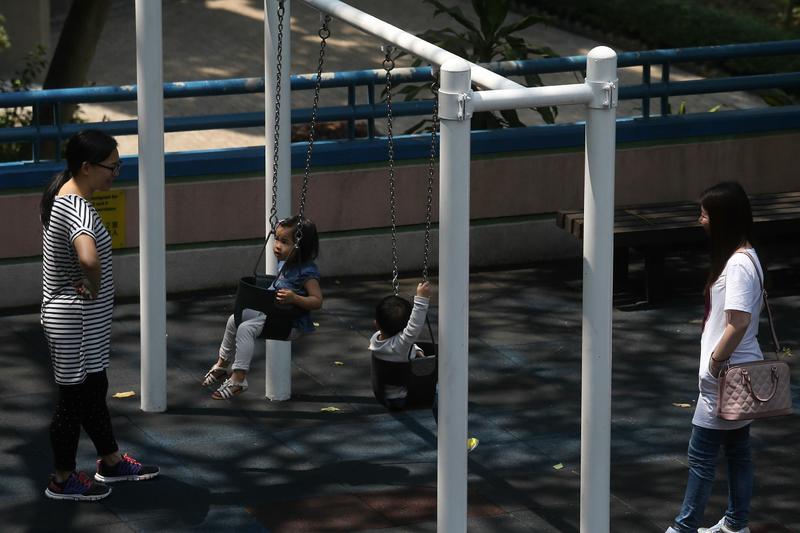 Only a few child playing in the playground at Hong Kong Park, Admiralty on April 13, 2015. (Roy Liu / China Daily)

Hong Kong’s youngsters were given an alarmingly low grade for their level of physical fitness, which lags behind many Asian countries and regions, a report by the Chinese University of Hong Kong says.

The underperformance may be linked to a lack of family support in doing daily physical exercise – which needs “significant improvement”, the report added.

Family support is of great importance in boosting teenager’s fitness, especially in helping them get more exercise

The report was part of the Report Card on Physical Activity for Children and Youth study, a worldwide study which looked at a number of factors contributing to teenagers’ health in 49 countries and regions.

The research team set 12 indicators and gave grades in accordance with the findings of scientific surveys and government reports conducted in the past 10 years.

According to the report, in regard to VO2peak – a key indicator of cardiorespiratory fitness, Hong Kong teenagers aged between 9 and 17 got a D grade. This is worse than most other Asian countries and regions included in the study. Hong Kong lagged behind Japan (A), Taiwan (B-) and South Korea (D+).

VO2peak is a key indicator of a person’s physical fitness and life expectancy. A low VO2peak directly results from insufficient physical exercise, the report said.

The report also showed that only about one third of Hong Kong's teenagers participated in physical activities with their families at least once a week. The city obtained a D- grade in this category, the worst among all indicators.

“Family support is of great importance in boosting teenager’s fitness, especially in helping them get more exercise,” said Stephen Wong Heung-sang, chairman of the Department of Sports Science and Physical Education of CUHK. He was also the chief investigator for the report.

“It’s understandable that after a whole day’s work, parents would be too tired to play with children. Even on weekends, they might also need plenty of time to have a rest,” he said. Also due to long working hours, Japan got a C- in this category.

Calling this a social problem, Wong suggested the government provide more support in helping parents to obtain a work-life balance. “We definitely should not sacrifice the health of our next generation for economic development,” he stressed.