By Zhao Xinying and Aybek Askhar 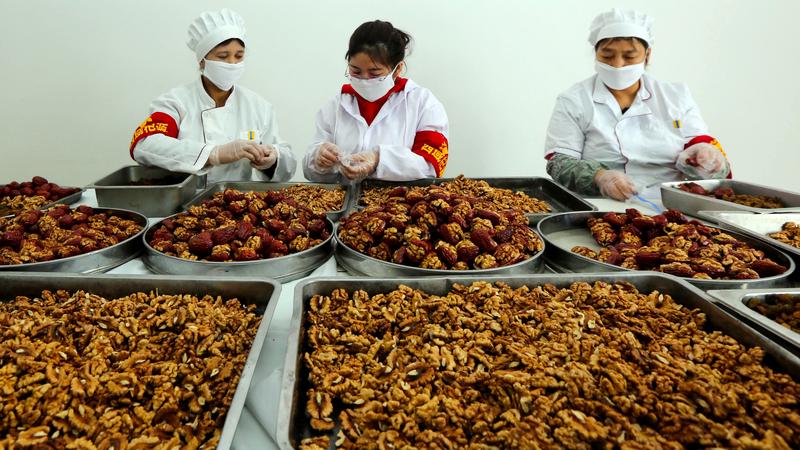 Editor's note: This is the first in a series of stories about the Xinjiang Uygur autonomous region, looking at developments in the area's economy, culture, business sector and measures to alleviate poverty.

Sitting in a 10-square-meter office in downtown Aksu prefecture in the south of the Xinjiang Uygur autonomous region, Mehmut Mardan was busy replying to constant inquiries from customers on aliwangwang, an instant-messaging platform developed by the e-commerce giant Taobao.

Three years ago, the then-recent college graduate opened an online shop to sell red dates, walnuts and apples grown by his immediate family, other relatives and neighbors.

Ecommerce is booming in Aksu, producing a very good climate for online trading, and benefiting a large number of people

In the first three months, Mehmut earned 3,000 yuan, far more than the average income in his hometown.

"It tripled after another three months, and I started to realize the magic of e-commerce," said Mehmut, the son of a poor farmer from Wensu county in Aksu.

Now employing three workers, the 25-year-old's business has annual revenue of about 3 million yuan (US$447,000).

But the young man is not content. Having set a goal for annual revenue of 10 million yuan, Mehmut is planning a trip to Hangzhou, capital of Zhejiang province in East China. There, in the city popularly known as the "cradle of e-commerce in China", Mehmut believes the pioneers will provide invaluable lessons on how to run his online business more efficiently.

Lying to the south of the Tianshan Mountains and north of the Tarim Basin, a huge depression covering about 400,000 square kilometers, Aksu, which means "clean water" in the Uygur language, covers 130,000 sq km. 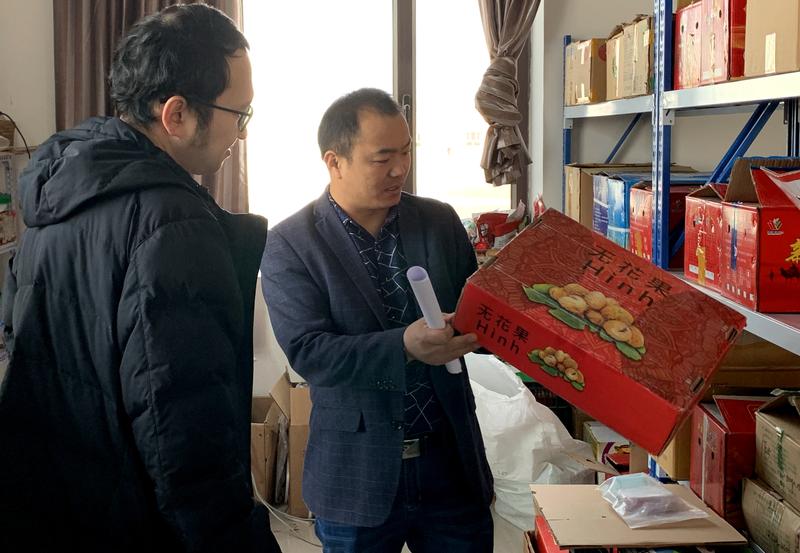 Aksu is home to 2.8 million people, 83 percent of whom are members of the Uygur ethnic group, and its northwestern extremity shares a combined 235-km border with Kazakhstan and Kyrgyzstan.

Given this backdrop, selling the produce via online platforms and developing e-commerce is an efficient way for local people to clear their stocks and lift themselves out of poverty.

Last year, to help the development of e-commerce, the prefectural government allocated each county 1 million yuan to 3 million yuan.

The Aksu E-commerce Industrial Park, built in the downtown in 2015 with support from the Hangzhou government, is home to the Aksu E-commerce Association, a number of logistics enterprises and the offices and warehouses of several online stores. 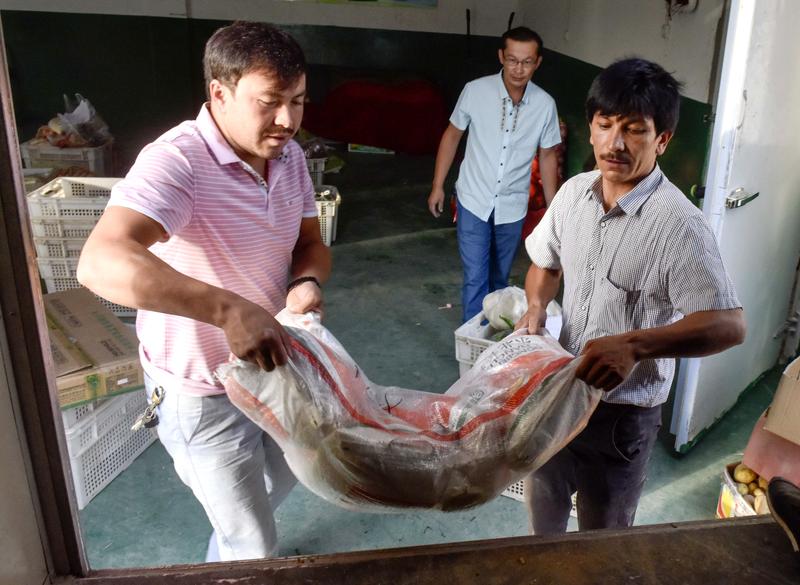 While some young people in Xinjiang such as Mehmut are heading east to learn more about e-commerce, others are moving in the opposite direction, bringing knowledge and experience with them.

After spending several years working as a business consultant at Alibaba's headquarters in Hangzhou, Zhou Hu, who was born and raised in Aksu, chose to return home and take up the post of director of the Aksu E-commerce Training Center at the Alibaba Business School in the industrial park.

As part of his job, Zhou gives lectures on the "ABC" of running an online business: how to start and equip an online store, attract consumers, package and deliver commodities, and deal with customer complaints.

"We believe that if you want to become an online store owner, first, you have to be a very good online consumer," said the 37-year-old, who is also secretary-general of the Aksu E-commerce Association.

"As many people in Aksu, particularly some less-educated members of the Uygur ethnic group, don't know how to use a computer, our training often has to start from the absolute basics by explaining and showing them what online shopping is and how to buy goods online."

To better meet the demands of local people, Zhou and his colleagues have compiled textbooks in both Mandarin and the Uygur language.

Since the center was established in early 2015, more than 3,600 people from Aksu and other places in Xinjiang have participated in its free training programs, and 460 of them were Uygur. 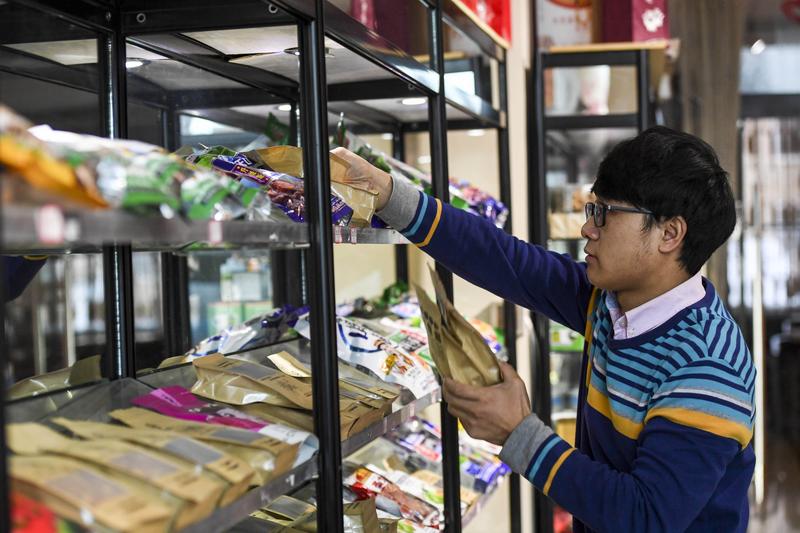 The prefectural government identifies those who are passionate about e-commerce and sends them to Hangzhou for more systematic training, including lessons about finance and more advanced store-operating techniques.

To encourage more people to open online stores in the industrial park, the government offers free offices and packing facilities, and exempts store owners from utility costs. In addition, the association gives store owners a subsidy of 1 yuan for each parcel they deliver.

Those efforts are paying off. Last year, about 2,400 online stores were active on Taobao in downtown Aksu alone, a rise of 30 percent from 2017, according to Ji Wenjun, an official with the Aksu bureau of commerce.

In total, 18,000 people in the downtown were engaged in the e-commerce industry, delivering more than 13 million parcels, and revenue reached 820 million yuan, a rise of 37 percent from 2017.

Ji said that a recent official survey showed that Aksu ranked in the top five prefectures in Xinjiang in indexes related to e-commerce entrepreneurship, online shopping and e-commerce services, indicating that the sector is developing vigorously.

"E-commerce is booming in Aksu, producing a very good climate for online trading, and benefiting a large number of people," Ji said.

Turak Abdurasul used to make a living by growing walnuts and wheat in Aksu's Wushi county. However, the work only brought an annual income of 10,000 yuan, making it difficult to provide for his wife and three children.

The 39-year-old farmer, who knew nothing about e-commerce, never imagined that he would benefit from the development of the sector.

In 2015, at the recommendation of the local government, he landed a job with Zhenxing Animal Husbandry Co, a private enterprise only a few kilometers from his home.

The company's main business is raising cows and sheep for slaughter. The meat is packed in attractive gift boxes before being sold on its online store.

Much of the livestock comes from poor farmers in nearby villages who are unable to make a profit raising the animals. Instead, they entrust the work to the company in return for an annual dividend.

The company has registered a trademark for its fresh meat and opened a restaurant in Quzhou, Zhejiang, where the meat is served and exhibited to help more people in East China learn about high-quality Xinjiang products. 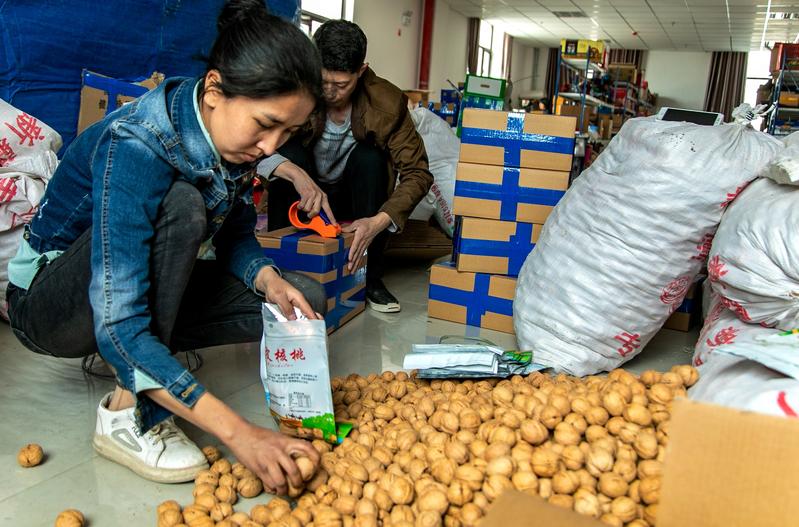 Hao Shenshang (right) and his wife, who own an online store in the Aksu E-commerce Industrial Park, pack walnuts at their premises. (DUAN XIAOMAO / FOR CHINA DAILY)

The measures have been effective, and the meat has been well-received by consumers.

In addition to Zhejiang, many groups of online buyers in provinces such as Sichuan, where hotpot is a staple dish, order large amounts of beef and lamb, said Yuan Yuan, Zhenxing Animal Husbandry's general manager.

Last year, meat sales generated revenue of 3 million yuan, and the figure is expected to double this year, according to Yuan. "Rising sales of our meat products online are bringing better lives to our poorer employees," she said.

Turak is one such example. Having started as a livestock breeder at the company, he is now a staff manager earning a salary of 4,000 yuan a month.

The company also pays his national insurance contributions and gives him an annual bonus.

"Earning a stable income, I paid off my debts, bought a liquid crystal display television for my family and a smartphone for myself," he said, adding that he is preparing for the drivers' test and plans to buy a car if he passes.

Though e-commerce is thriving in Aksu, its development has encountered difficulties, especially when it comes to raising funds to start or expand businesses.

When he tried to set up his online store three years ago, he asked his father for a loan, but he refused, calling online business "a fraud".

Eventually, one of Mehmut's college teachers in Anhui province loaned him money to use as startup capital, and helped again by providing a further 20,000 yuan for operating expenses.

"Without the support and encouragement of my college teacher, I would not have come this far," Mehmut said.

Not every fledgling entrepreneur is as lucky as Mehmut, though.

Liu Huifang, who sells honey from her online store in the Aksu E-commerce Industrial Park, said consumers already recognize her products, so she needs to expand her business to meet the rising demand.

However, the difficulty small and micro businesses face in obtaining loans from banks means she has to raise most of the money herself.

"This is hampering my business from growing bigger," the 28-year-old said.

Zhou, from the Aksu E-commerce Association, said his organization and the training center are working to find ways to solve the problem.

"We are seeking to establish a foundation and introduce 'angel capital' to help online store owners," he said.

"But to attract capital, we must first improve the packaging of the products."

Zhou said people in Xinjiang are so confident about the quality of their agricultural produce that some believe packaging is unimportant.

"That's why most products bought from online vendors in Xinjiang have simple, rough packaging, which makes them look cheap and less attractive," he said.

To illustrate his point, he held up one of the soft, thin paper boxes that are widely used by online store owners to pack red dates in the industrial park.

"People think that consumers will pay for the products regardless of appearances. That's a big misunderstanding," he said.

"Good presentation adds to the appeal and the retail price of products, helping goods from Xinjiang to win greater customer recognition."

Some forward-thinking entrepreneurs have already acted to remedy this fault. Liu, the honey seller, recently upgraded her containers from plastic bottles to delicate, well-designed glass ones, each costing 10 yuan.

"Though costs rose initially, sales have improved greatly thanks to the attractive packaging," she said.