UNITED NATIONS — The UN humanitarian chief urged the Security Council on Tuesday to take action to end the "bloody onslaught" in Syria's last opposition-held stronghold, warning that continued violence could create the worst humanitarian disaster of the 21st century.

An exasperated Mark Lowcock told council members they have ignored previous pleas to stop the bombing and shelling in Idlib province by Syrian and Russian warplanes and "done nothing for 90 days as the carnage continues in front of your eyes."

"Are you again going to shrug your shoulders ... or are you going to listen to the children of Idlib, and do something about it?" he asked.

The Security Council has been deeply divided over the Syrian conflict since it began in 2011, with Russia backing the government and Western nations supporting the opposition

The Security Council has been deeply divided over the Syrian conflict since it began in 2011, with Russia backing the government and Western nations supporting the opposition. That has kept the UN's most powerful body from taking any significant action.

Britain's UN Ambassador Karen Pierce told the council that responsibility for its failure to act lies with Russia, Syria and Iran.

What's happening in Idlib "makes a mockery" of the responsibility of the five permanent veto-wielding council members — Russia, China, the United States, Britain and France — to ensure international peace and security, she said.

Idlib was supposed to be a de-escalation zone under an agreement reached between Russia and Turkey, which backs the opposition. But that deal has all but collapsed since the government launched an offensive on April 30, saying it wanted to get rid of "terrorists" that took refuge there.

Russia's UN Ambassador Vassily Nebenzia responded to what he called "invectives" against Syria and Russia from Britain and others, saying their goal "is to maintain a terrorist presence in Idlib, and in the future to use this presence for the purpose of combatting the legitimate Syrian authorities."

Nebenzia said the same "emotionally charged" attacks happen "every time when the end of another terrorist enclave in Syria was close." He cited eastern Aleppo and eastern Ghouta, saying "now the propaganda machine is firing full artillery around the situation in Idlib."

Britain, France, the United States and other council nations have been especially angered at the increasing number of attacks on health facilities and schools, and the growing number of civilian casualties in Idlib.

A petition from 10 Security Council members delivered to Secretary-General Antonio Guterres Tuesday asks the UN chief about the possibility of launching an investigation into attacks on medical facilities and the so-called "de-confliction mechanism" under which the locations and coordinates of health facilities are reported to the warring parties.

Humanitarian chief Lowcock said it was an "extremely important question" whether information provided through the de-confliction system was being used to protect civilian facilities or target them. 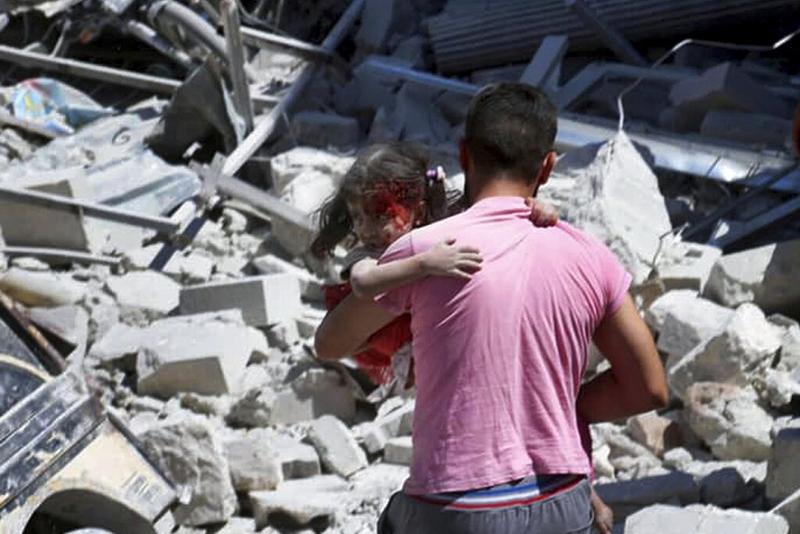 This photo provided by the Syrian Civil Defense White Helmets, which has been authenticated based on its contents and other AP reporting, shows a Syrian man carrying an injured girl after an airstrike hit the northern town of Ariha, in Idlib province, Syria, July 27, 2019. (PHOTO / AP)

He said parties to the conflict have been notified of six different attacks in northwest Syria this year, and that "in the current environment de-confliction is not proving effective in helping to protect those who utilize the system."

Lowcock said his team will meet with humanitarian organizations "to update them on the current situation and determine again whether we should continue to provide information to the parties on new sites or humanitarian movements."

On July 26, the UN human rights office reported that at least 450 civilians have been killed since late April, including more than a hundred in the previous two weeks.

"There is no refuge for the people of Idlib," Lowcock stressed. "Hundreds of them have been killed, hundreds more injured, 440,000 of them displaced, but there is nowhere else for them to go."

"There's been a bloody onslaught in full swing now for more than three months on the people of Idlib, and if it doesn't stop ... it has the potential to create the worst humanitarian disaster the world has seen so far this century," he warned.

Susannah Sirkin, policy director at Physicians for Human Rights, told the council that since Syria launched its offensive the organization had received reports of 46 attacks on health care facilities. So far, she said, it has verified 16 of them.

Sirkin said many health facilities in Idlib have been forced out of service and accused Syria and Russia of continuing to target them.

Russia's Nebenzia said it was a "lie" that Russia was deliberately conducting airstrikes targeting hospitals and schools.

He said Lowcock and others should contact the Center for Reconciliation of Opposing Sides, which deals with de-confliction and operates around the clock, instead of spreading information based on "dubious sources."