Restoring law, order a 'must' to end chaos 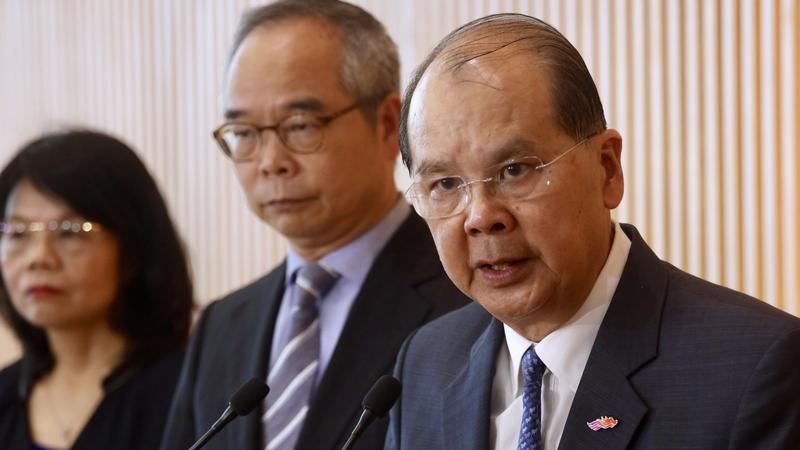 To restore law and order is Hong Kong’s most urgent task because a stable and peaceful social environment is the foundation for any rational discussion to save the city from chaos, said Chief Secretary for Administration Matthew Cheung Kin-chung on Tuesday.

Cheung made the remarks in an interdepartmental press conference to brief about the impact of the strike and violent protests across the city on Monday.

Quoting Chief Executive Carrie Lam Cheng Yuet-ngor, Cheung said the organized and premeditated violent acts are neither peaceful nor have anything to do with the now-suspended extradition bill. He reiterated that the special administrative region government has put a full stop to the extradition law amendments.

Noting that radical protesters clashed violently with the police in eight districts on Monday, and besieged over 15 police stations, Cheung said the violence would only push Hong Kong into a more dangerous situation.

The Hong Kong Police Force, in a press conference on Monday, stressed that the escalated violence was “a total disregard for the rule of law”

He also called on society to reject violence, safeguard the city’s rule of law, and ensure that what the city has achieved would not be destroyed.

Cheung noted that the Independent Police Complaints Council has started a comprehensive review of the protests since June 9.

Also at the briefing, Secretary for Security John Lee Ka-chiu said the spate of violent acts on Monday were unprecedented in Hong Kong since its return to the motherland. They were “most widespread, most damaging and most serious,” he said.

Noting that police have suffered from intense pressure, Li thanked them for their efforts to restore the city’s law and order, and said the government will continue to support the police in bringing offenders to justice.

Li stressed that the police will comprehensively evaluate the situation of each public assembly before taking actions.

He called on the public to understand that police officers are obliged to safeguard the rule of law in these difficult times.

There were 21 cases of arson during the protests on Monday and about 200 sets of traffic lights were damaged.

Due to protesters’ obstruction, 36 roads and the Cross Harbour Tunnel at Hung Hom were temporarily blocked, while 96 bus routes had to be diverted or suspended.

The Hong Kong Police Force, in a press conference on Monday, stressed that the escalated violence was “a total disregard for the rule of law”.

The Hong Kong Police Force is capable of and determined to control the unrest, and both the police and the public have a role to play in restoring safety and stability in Hong Kong, said Tse.

READ MORE: A day of frustration for city commuters

The police fired around 20 sponge bullets, 140 rubber bullets, and 800 tear gas grenades on Monday to disperse protesters in various locations.

Seven police officers were injured, according to the police.