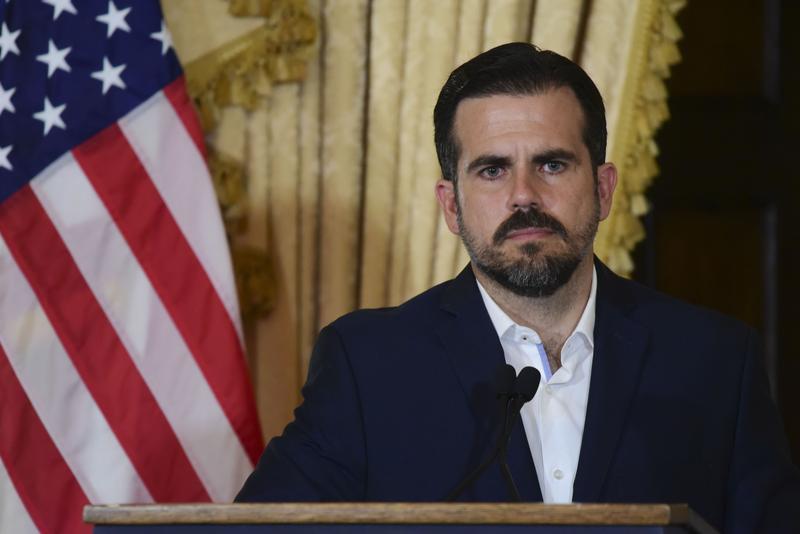 SAN JUAN, Puerto Rico — Puerto Rican Gov Ricardo Rosselló was in Europe with his family this week on vacation when his administration took several hits that many believe have tarnished the US territory's reputation and weakened its relationship with the US government.

"I'm the governor of Puerto Rico, but I'm a human being who has his faults," Puerto Rican Gov Ricardo Rosselló said in a press conference late Thursday. "I ask for forgiveness."

First, the FBI arrested former top officials in his government on corruption charges. Then local media published excerpts of a private chat in which he called former New York City Council speaker Melissa Mark-Viverito the Spanish word for "whore" and in English told a federal control board overseeing the island's finance to "go f--- yourself" followed by a string of emojis with the middle finger raised.

"I'm the governor of Puerto Rico, but I'm a human being who has his faults," Rosselló said in a press conference late Thursday. "I ask for forgiveness."

Rosselló said he had been working 18-hour days and releasing tensions when he made the comments against the board and Mark-Viverito.

"None of this justifies the words I've written," he said in reference to excerpts from a chat extracted from a messaging system used by government officials that were published by local media. "My apologies to all the people I have offended... This was a private chat."

The comments drew the ire of many Puerto Ricans who said they were ashamed of his language and how it might reflect on a US territory that had already come under scrutiny earlier this week with the arrests of former government officials including the island's education secretary.

Rosselló said he had not yet spoken to Mark-Viverito, who posted a lengthy statement on Twitter that read in part, "A person who uses that language against a woman, whether a public figure or not, should not govern Puerto Rico ...this type of behavior is completely unacceptable."

In the chat, Rosselló wrote he was upset that Mark-Viverito had criticized Tom Perez, chair of the Democratic National Committee, for supporting statehood for Puerto Rico.

Those who participated in the chat included Ricardo Llerandi, Puerto Rico's Chief of Staff, Christian Sobrino, executive director of Puerto Rico's Fiscal Agency and Financial Advisory Authority; and Ramón Rosario, former public affairs secretary. Rosselló said the entire chat, which has not been released publicly, has since been erased and that he doesn't know who leaked part of it. 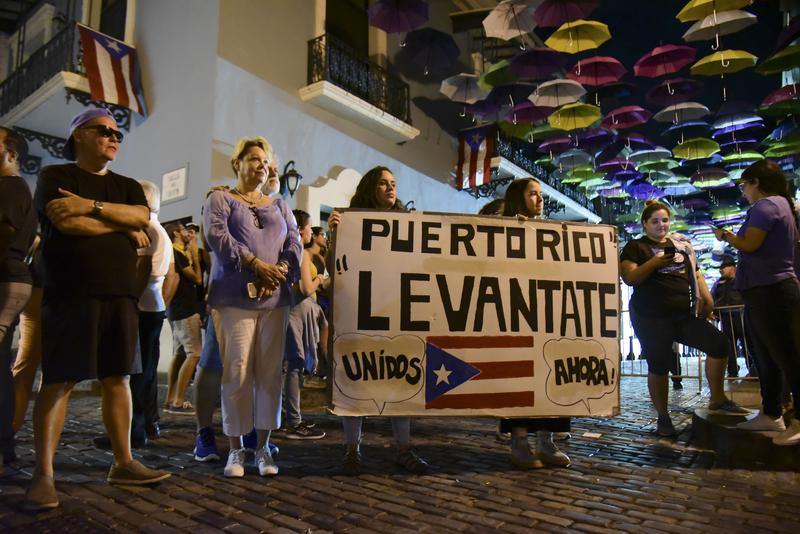 Dozens of citizens holding a sign that reads in Spanish "Puerto Rico rise up, unite now!" protest near the executive mansion denouncing a wave of arrests for corruption that has shaken the country and demanding the resignation of Gov Ricardo Rossello, in San Juan, Puerto Rico, July 11, 2019. (CARLOS GIUSTI / AP)

Officials said the alleged fraud involves US$15.5 million worth of federal funding issued between 2017 and 2019. They said US$13 million was spent by Puerto Rico's Department of Education while Keleher's as secretary and another US$2.5 million spent by Ángela Ávila Marrero when she was director of Puerto Rico's Health Insurance Administration. Ávila Marrero was charged along with businessmen Fernando Scherrer-Caillet and Alberto Velázquez-Piñol, and education contractors Glenda E. Ponce-Mendoza and Mayra Ponce-Mendoza, who are sisters.

Officials said there was no evidence that Keleher or Ávila-Marrero had personally benefited from the scheme.

"I am ashamed to have to listen to the allegations that have been made against former public officials," Rosselló said. "It is simply unacceptable, it is unprecedented what our people have had to go through."

Earlier Thursday evening, a group of protesters gathered at Puerto Rico's main international airport to receive Rosselló as he cut his vacation short to address the arrests and the leaked chat. The protesters then traveled to the governor's seaside mansion where Rosselló spoke late Thursday and demanded his resignation.

"We hope the people don't remain with their arms crossed," said protester Ricardo Santos Ortiz. "It's a matter of basic respect...We want to show the world that we are not in agreement with the governor."

Rosselló said he would not resign and that he was focused on implementing anti-corruption measures, although he did not provide details.

"This crossroad could be beneficial if they take full advantage of it," he said.

However, he said the arrests have raised concerns of widespread corruption in Puerto Rico at a time where it is still seeking federal funds to rebuild from Hurricane Maria as it remains mired in a 13-year recession.

"It could be a reflection that government institutions are rotting," Caraballo said.