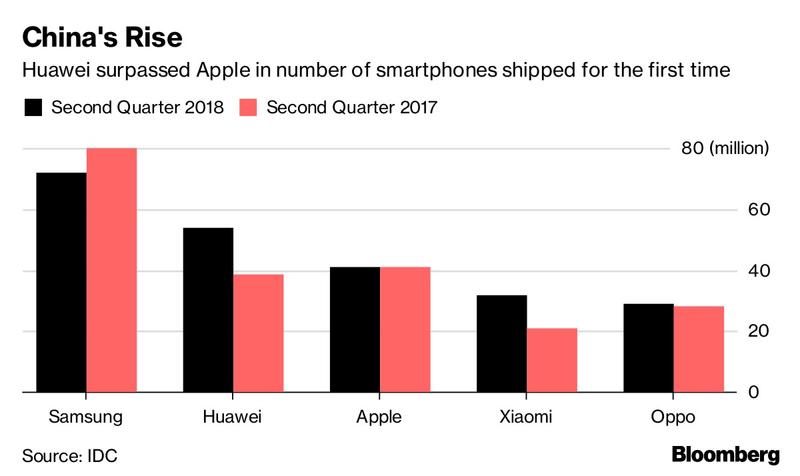 China’s Huawei Technologies Co. pulled ahead of Apple Inc. to claim the No. 2 position in smartphone shipments in the second quarter just behind Samsung Electronics Co., solidifying the rise of Chinese competitors, according to the market research firm IDC.

Huawei accounted for 16% of the market, compared with 21% for S. Korea's Samsung and 12% for Apple. China's Xiaomi & Oppo rounded out the top five

Huawei shipped 54.2 million phones in the quarter, 41 percent more than a year earlier, to jump ahead of the iPhone maker for the first time, the firm said. Huawei accounted for 16 percent of the market, compared with 21 percent for South Korea’s Samsung and 12 percent for Apple. Xiaomi Corp. and Oppo, both based in China, rounded out the top five.

Chinese smartphone makers have been gaining influence as their domestic market grows and they expand abroad. Huawei has been expanding aggressively in Europe and Africa, though it is blocked from the US. Apple tends to sell iPhones at higher prices than its rivals and profits from services like iTunes, which helped it top earnings estimates for the quarter.

"The continued growth of Huawei is impressive, to say the least, as is its ability to move into markets where, until recently, the brand was largely unknown," said Ryan Reith, program vice president with IDC’s Worldwide Mobile Device Trackers.

The overall smartphone market continued its slowdown with shipments slipping 1.8 percent for the quarter to 342 million units. The number of smartphones shipped in 2017 fell 0.3 percent, according to IDC, the first decline after years of strong growth.

Samsung earnings took a hit from the sluggish market when it reported earnings Tuesday. The South Korean company, which makes memory chips and screens as well as smartphones themselves, reported net income that fell short of analysts’ estimates.