Migrants weigh whether to stay in Mexico, resume trek to US 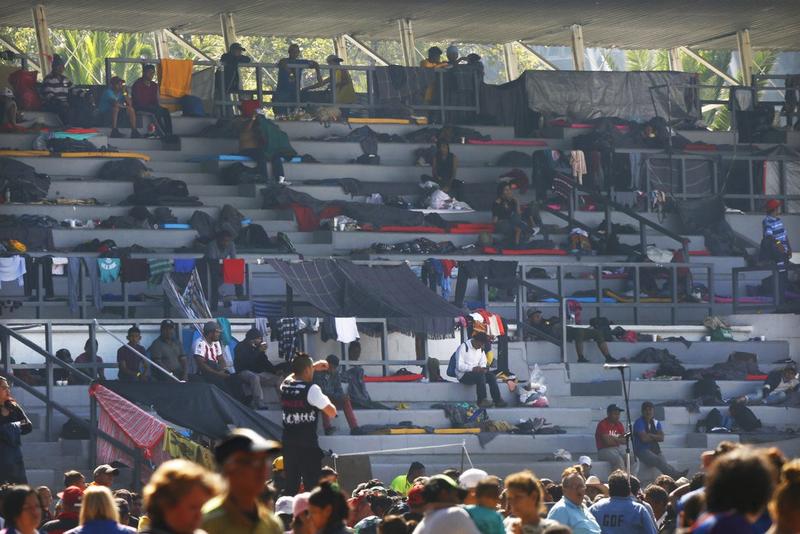 MEXICO CITY — Thousands of Central American migrants will take at least a couple of days to rest in a Mexico City stadium as they debate whether to accept offers to stay in Mexico or continue their trek to the US border.

Humanitarian aid stepped up Tuesday for the roughly 4,500 Central American migrants gathered at the Jesus Martinez stadium after an arduous journey that has taken them through three countries in three weeks. Mexico City officials said they are bracing as many as 5,500 migrants at the sports complex as more trickle in.

Mexican government said 2,697 temporary visas had been issued to individuals and families to cover them while they waited for the 45-day application process for a more permanent status

Members of the caravans of migrants, which President Donald Trump made a central issue in US midterm elections, declined to take an immediate decision Tuesday night on whether to definitively stay in Mexico or continue north, opting to remain in the capital at least a couple more days.

"Nobody is in more of a hurry than me to get going (to the US border), but we have to go all together," said Sara Rodriguez of Colon, Honduras. Rodriguez, 34, fled her country with her 16-year-old daughter Emily, after the girl began to draw unwanted attention from a drug trafficker.

Mexico is offering refugee, asylum or work visas to the migrants. The government said 2,697 temporary visas had been issued to individuals and families to cover them while they waited for the 45-day application process for a more permanent status.

Rina Valenzuela, who is from El Salvdor, listened attentively to aid workers from the nonprofit Institute for Women in Migration as they explained the difficulties of applying for and securing asylum in the US Valenzuela decided she would better off applying for refuge in Mexico.

"Why go fight there, with as much effort and as much suffering as we have gone through, just for them to turn me back? Well, no," she said.

Meanwhile, hundreds of city employees and even more volunteers were on hand Tuesday to sort donations and direct migrants toward food, water, diapers and other basics. Migrants searched through piles of donated clothes, grabbed boxes of milk for children and lined up to make quick calls home at a stand set up by the Red Cross.

Employees from the capital's human rights commission registered new arrivals with biographical data— such as age and country of origin— and placed yellow bracelets on wrists to keep count.

The atmosphere at the stadium in Mexico City was more institutional and organized than what migrants encountered on the road, where townspeople pushed bags of drinking water, tacos and fruit into their hands as they passed through tiny hamlets in southern Mexico. 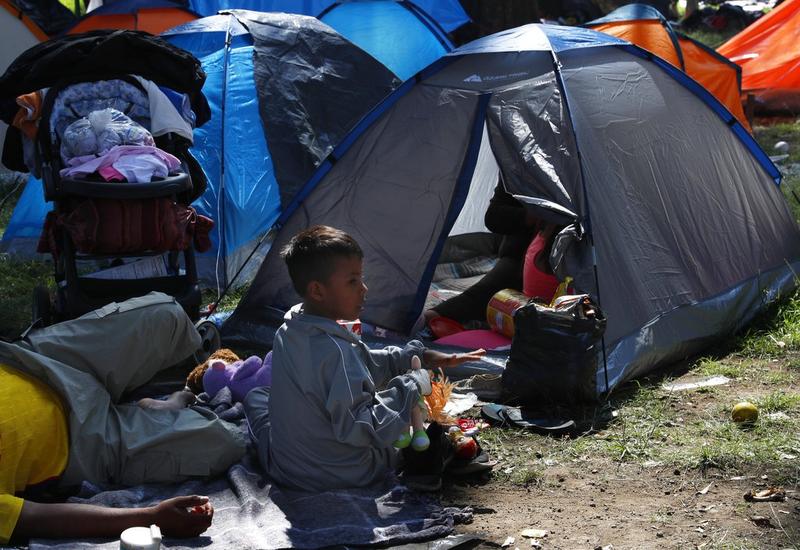 But there were signs that the stadium was already nearing its capacity to hold 6,000 people.

Maria Yesenia Perez, 41, said there was no space in the stadium when she and her 8-year-old daughter arrived during the night, so the two from Honduras slept on the grass outside. Migrants pitched tents in the parking lot and constructed makeshift shelters from plywood covered with blankets and tarps. Forty portable toilets were scattered across the grass.

The stadium's enclosed space and government intervention makes it difficult for aid workers to reach the migrants, said Nancy Rojas, an Oxfam charity worker who has accompanied the migrants for weeks.

Four big tents have been set up for women and children to sleep under with thin mattresses and blankets, while men were relegated Monday night to concrete bleachers. Temperatures dropped below 11 Celsius during the night in a city some 2,240 meters above sea level and still hundreds of miles from the US. border.

Several smaller groups were trailing hundreds of miles to the south. Mexico City Mayor Ramon Amieva said the city needs to "reinforce" to meet the needs of the migrants, especially vulnerable children and pregnant women.

Mexico City's central market supplied 3.5 tons of bananas and guavas to refuel the crowd, plus 600 bottles of water. The human rights commission said it planned to set up more tents and eating areas.

Many of the migrants sought treatment for blistered and aching feet, respiratory infections, diarrhea and other maladies.

Trump has seized on the caravan as an election issue and portrayed it as a major threat, though such caravans have sprung up regularly over the years and largely passed unnoticed.

He ordered thousands of troops to the US-Mexico border, vowed to detain asylum seekers in tents cities and insinuated without proof that there are criminals or even terrorists in the group.

In dozens of interviews since the initial caravan set out from Honduras more than three weeks ago, migrants have said they are escaping poverty and rampant violence. Many are families traveling with small children. Some say they left because they were threatened by gang members or had lost relatives to gang violence. Others say they hope to find work and send money to support relatives back home.

Organizers are urging members of the caravan already in Mexico City to await the arrival of stragglers and perhaps even the other caravans further back. The idea is to find strength in numbers. The outpouring of support for the caravan that first set out from Honduras on Oct 13 has inspired thousands of others to march north from Central America.

Former Honduran lawmaker Bartolo Fuentes, blamed by some for starting the caravan, re-joined the group in Mexico after being detained in Guatemala and deported to Honduras.

Fuentes denied leading the movement, saying it was a natural response "to a situation more terrible than war." He said about 300 to 400 Hondurans leave their country on an average day.

"What do we have here then? The accumulation of 20 days" of normal emigration, he said.