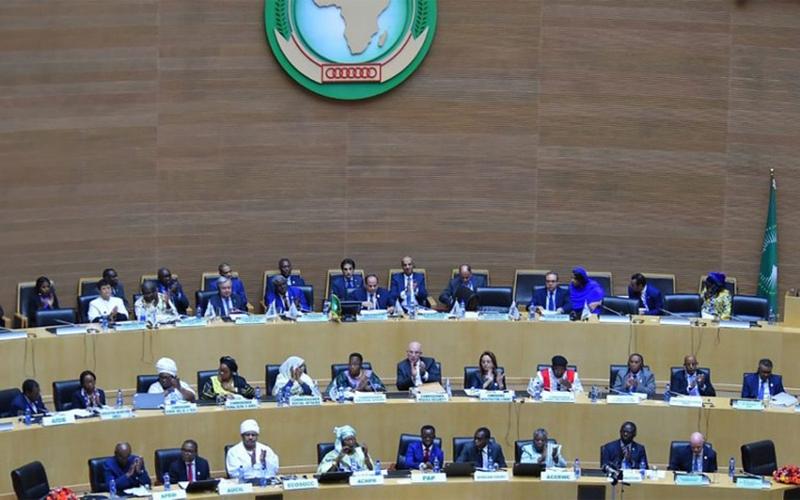 ADDIS ABABA – As African leaders concluded their two-day gathering as part of the 32nd Ordinary Session of the Assembly of the African Union (AU), officials hailed Africa's strategic cooperation with China under the umbrella of the pan African bloc.

From the Chairperson of the AU Commission Moussa Faki Mahamat to the AU Peace and Security Commissioner Smail Chergui as well as various other AU commissioners and heads of the bloc’s specialized agencies spoke highly of China's growing win-win cooperation with the AU and the African continent in general.

The remarkable success of FOCAC held in Beijing in September 2018 illustrates the unprecedented dynamism of our partnership.

As the two historical allies, Africa and China have registered remarkable development in their relations over the years, said the AU, which officially launched its representation office in Beijing in September 2018 during the Beijing Summit of the Forum on China-Africa Cooperation (FOCAC).

Faki, while addressing the opening session of the two-day 32nd AU summit that opened on Sunday, said that China and the AU have been enjoying "unprecedentedly dynamic" partnership in various areas.

"The remarkable success of FOCAC held in Beijing in September 2018 illustrates the unprecedented dynamism of our partnership," Faki said.

"The opening of an AU office in Beijing will obviously strengthen this multifarious and fruitful partnership, including the strategic dialogue between the AU Commission and the People's Republic of China," he added.

Talking to Xinhua on Monday, Nnadozie highlighted the role of the China-proposed Belt and Road Initiative (BRI) and the Beijing FOCAC Summit in further strengthening Africa-China ties.

"We are extremely grateful to the Chinese government for the agreement during the last FOCAC Summit," Nnadozie said, referring to an accord between Chinese and African leaders.

"We (at the ACBF) have just completed a study on how Africa can benefit from the Belt and Road Initiative because it is highly anticipated here in Africa and China as well," he said.

AU's Peace and Security Commissioner Smail Chergui told Xinhua on Monday that China is a good partner to the AU that helped the continental body face numerous peace and security challenges in Africa, ranging from efforts to end the civil war in South Sudan to the United Nations peacekeeping mission in conflict-hit Mali.

"China is a very good partner of the AU. China has made concrete contributions to the AU's peace and security efforts," said Chergui.

"The AU and China have many areas of cooperation ranging from the deployment of Chinese peacekeepers in conflict areas, to technical and logistical support for the numerous peacekeeping efforts in Africa," the peace and security commissioner stressed.

"China is an important partner for Africa and the AU in general," Chergui said.

China is the second largest contributor to the UN peacekeeping budget and the 11th largest provider of UN peacekeepers. Chinese peacekeepers have served in several UN mandated peacekeeping missions across Africa, including those in South Sudan, Sudan's Darfur region, the Democratic Republic of Congo and Mali.

Chergui emphasized that the relationship between the AU and China is not restricted to peace and security aspect.

"We have other domains of cooperation including health, energy, and infrastructure to mention some of the multifaceted relationship," he said.

"China has been actively supporting the work of the AU," Samate-Cessouma affirmed.

"Over the years, China has been actively supporting the AU's mediation role in various conflicts in Africa, including the conflict in Sudan and South Sudan as well as the parties within South Sudan," she said.

Sierra Leone's Minister of Foreign Affairs and International Cooperation Alie Kabba also told Xinhua on the sidelines of the summit that the growing China-Africa cooperation in peace and security demonstrates the overall deep partnership between Africa and China.

"It is time when the focus on peace and security in Africa is at the central stage in the African Union's efforts to make sure that Africa becomes a continent where there is no conflict, and we have the capacity to prevent and resolve conflicts," Kabba said.

Senegal's Secretary-General of the Ministry of Foreign Affairs Mame Baba Cisse also said that "China has been contributing to the peace building and security in Africa."

Baba Cisse further stressed that China "has become a natural partner for Africa" in maintaining peace and stability in the African continent as well as overall development sectors.

Africa and China "have been engaged in win-win cooperation, and our partnership is based on sincerity, affinity, good-faith, and good results," he said.

According to the African Capacity Building Foundation (ACBF), young African enthusiasts have "really contributed to Africa's development" after undertaking their studies in China with scholarships granted from the Chinese government.

"We have been monitoring with satisfaction in many aspects the support that the Chinese government has been giving to really promote capacity development in areas of need," ACBF's executive secretary Emmanuel Nnadozie told Xinhua on the sidelines of the AU summit.

Africa is a major recipient of China's capacity development support, according to the ACBF. By the end of 2017, the Chinese government has trained 5,655 participants of different professions for Ethiopia, covering over 20 fields that include education, health and medical services, agriculture, tourism, manufacturing industries, public administration, business management, urban development and poverty reduction, according to the Chinese Embassy in Addis Ababa.

According to ACBF, China's capacity development support to Africa also contributes in tackling the migration of desperate African youth via dangerous routes to Europe and the Middle East.

"We welcome China's involvement, because it gives us the sense that we have a fundamental foundation in strengthening multilateralism across borders," Sierra Leone's minister of foreign affairs and international cooperation, Alie Kabba, said in an exclusive interview with Xinhua during the summit.

Noting the rising resistance against multilateralism in recent years, Kabba spoke highly of China's growing contribution in the global arena as a major actor to fill the gaps that are witnessed in maintaining the multilateralism system.

"We believe that in coming together to make sure that we achieve a shared future for everybody is the way forward," he said. "When we see China stepping up, it gives us the sense that we are moving in the right direction.”