By Jing Shuiyu and Zou Shuo 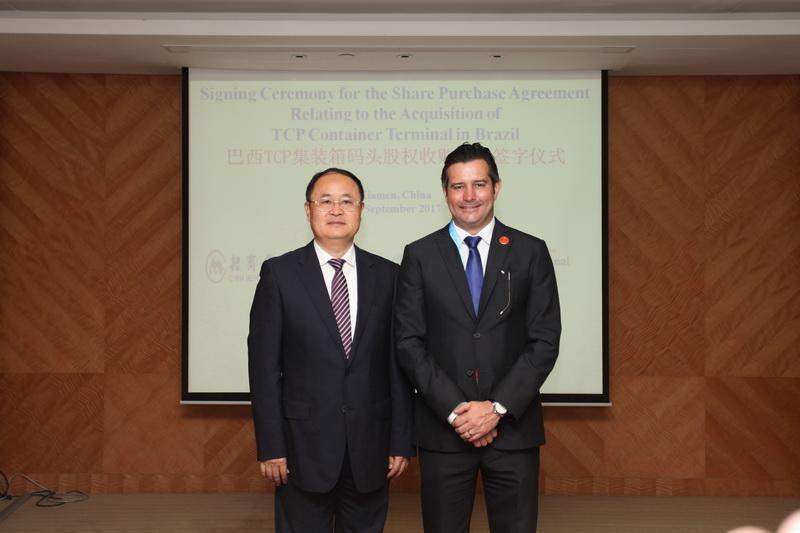 This photo taken from the official website of China Merchants Port Holdings Co Ltd shows Hu Jianhua (left), Vice-Chairman of CMPort and the Executive Vice-President of China Merchants Group Limited, and Mauricio Quintella, Brazil's Minister of Transportation Ports and Civil Aviation, at the signing ceremony for the share purchase agreement relating to the acquisition of TCP container terminal in Brazil on Sept 5, 2017.

China Merchants Port Holdings Co Ltd announced on Monday that it had agreed to purchase 90 percent of TCP Participacoes SA, the operator of Brazil's most profitable port terminal, also the country's second largest container terminal, for HK$7.23 billion (US$924 million).

The move illustrates the Hong Kong-based CMPort's ambition to further expand its presence in Latin America.

According to a public filing, the investment will allow the group to further "consolidate its position globally" by boosting its market share in Latin America.

The transaction will help the two sides achieve their commercial objectives, and enhance bilateral economic and trade ties

"Brazil, as the largest economy in Latin America, has huge market potential, coupled with abundant resources and reserves. The transaction will help the two sides achieve their commercial objectives, and enhance bilateral economic and trade ties," the group's announcement quoted Hu Jianhua, its deputy general manager, as saying.

Hu said Brazil is a member of the BRICS group and China's most important comprehensive strategic partner and trading partner. The transaction is in line with CMG's goal to deepen cooperation with BRICS members.

The deal will be funded by a combination of the group's internal resources and external debt financing, according to the filing.

TPC's annual container throughput now stands at 1.5 million twenty-foot equivalent units, which will be increased to 2.4 million TEUs per year upon completion of the company's expansion plan to be carried out from later this year to the second half of 2019, according to the filing.

Located in a sheltered bay that offers good navigating conditions and 24-hour access, TCP is the second-largest container terminal in Brazil.

Bai Jingtao, CMPort's managing director, said: "The TCP project not only lays the foundation for CMPort to enter Brazil, but also serves as a hub to facilitate the ever-increasing commodity and goods trade flow between Brazil and China."

"In future, CMPort will continue to leverage its experience of operating international port and local connectivity to help TCP succeed as one of the leading ports in Brazil as well as in Latin America."

Foreign players perceive Brazilian port operators as less prone to facing roadblocks than other infrastructure segments. A record grain crop and a recovering economy may accelerate port and terminal merger and acquisition activity before valuations climb further, the people said.

Returns in Brazil's port industry have declined in recent years, after shipping companies gained in scale through M&A and a supply glut and heightening competition hurt container players, especially in the Santos port, Latin America's largest.

Still, investor interest in the segment has grown as a three-year recession shows signs of subsiding.