HSBC Holdings Plc embarked on its biggest overhaul in years after profit missed estimates, warning that it will pare back underperforming operations in the face of slowing economic growth and geopolitical uncertainty.

The bank, which makes almost 90 percent of its profit in Asia and employs 240,000 people, walked away from a key profitability target and said write-offs are likely for some of its European business and technology spending. For acting Chief Executive Officer Noel Quinn, who took over in August following the ouster of John Flint, the review is his chance to put his stamp on the sprawling lender. Cuts at the investment bank have already begun.

“Our previous plans are no longer sufficient to improve performance” in the US, continental Europe and British investment banking, given “the softer outlook for revenue growth,” Quinn said in a statement Monday. “We are therefore accelerating plans to remodel them, and move capital into higher growth and return opportunities.”

The shares slid as much as 4.3 percent in London, the most in more than 2 1/2 years. Any writedown could wipe out some of the investment made during Flint’s tenure, when the bank said it would spend about US$17 billion updating its technology platforms and expanding its business in Chinese mainland.

“You are likely to see us needing to revisit a few things,” Chief Financial Officer Ewen Stevenson said on a call with Bloomberg. “We are carrying a decent amount of goodwill against parts of the European business in particular,” and there may be “some investment spent, for example in information technology, that we need to write off.”

HSBC’s pretax profit fell 12 percent to US$5.3 billion for the third quarter. It dumped its target for return on tangible equity, a key measure of profitability, of more than 11 percent in 2020. Retail banking and wealth management saw a 18 percent drop to US$1.69 billion.

Global banking and markets, which houses HSBC’s investment bank, posted a 30 percent decline in pretax profit for the quarter to US$1.24 billion, and that may be bad news for bonuses. While the bank’s total costs rose year-on-year, HSBC said it had cut performance-related pay by US$200 million. It didn’t say what division’s staff was taking the largest hit, but traditionally its investment banking unit represents the largest single chunk of variable pay.

“The good news is that this performance looks set to finally goad the management into taking some of the actions to address under-performing businesses that we have been awaiting,” wrote Edward Firth, an analyst at Keefe, Bruyette & Woods. 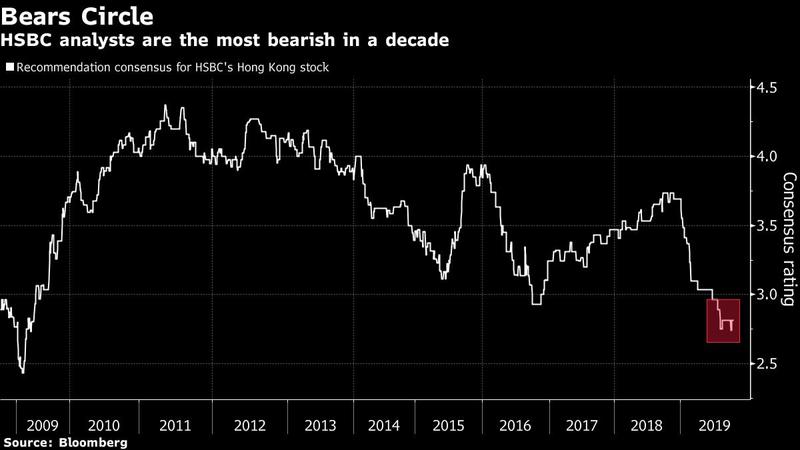 Quinn, who’s signaled he wants the top job on a permanent basis, has been developing plans for a series of retrenchments. The bank may partially exit stock trading in some developed Western markets, and will attempt to sell its French retail bank, a move that could remove as many as 8,000 staff from the payroll, people familiar with the matter have said.

“Having a strong presence in both continental Europe and the US is important to our bank, and we will retain a presence in both of those markets -- but we need to reshape that presence,” Quinn said in an interview with Bloomberg. He declined to provide details.

HSBC’s third-quarter adjusted profit trailed a company-compiled analyst consensus of US$5.7 billion. Here are some other highlights from its results:

HSBC credited its operations in Asia with holding up despite challenges in the region. Few global companies have tied their fortunes as much to Hong Kong as HSBC, which wants to capitalize on closer economic ties with Chinese mainland.

In Hong Kong, adjusted pretax profit inched up 1 percent in the quarter to US$3 billion. However, the bank also flagged a credit charge of US$90 million to reflect a deteriorating outlook in the city, where small- and medium-sized businesses are suffering the most. Quinn also said some ultra-high-net-worth clients are opening accounts outside Hong Kong as a contingency plan, though there hasn’t yet been a significant outflow of funds.