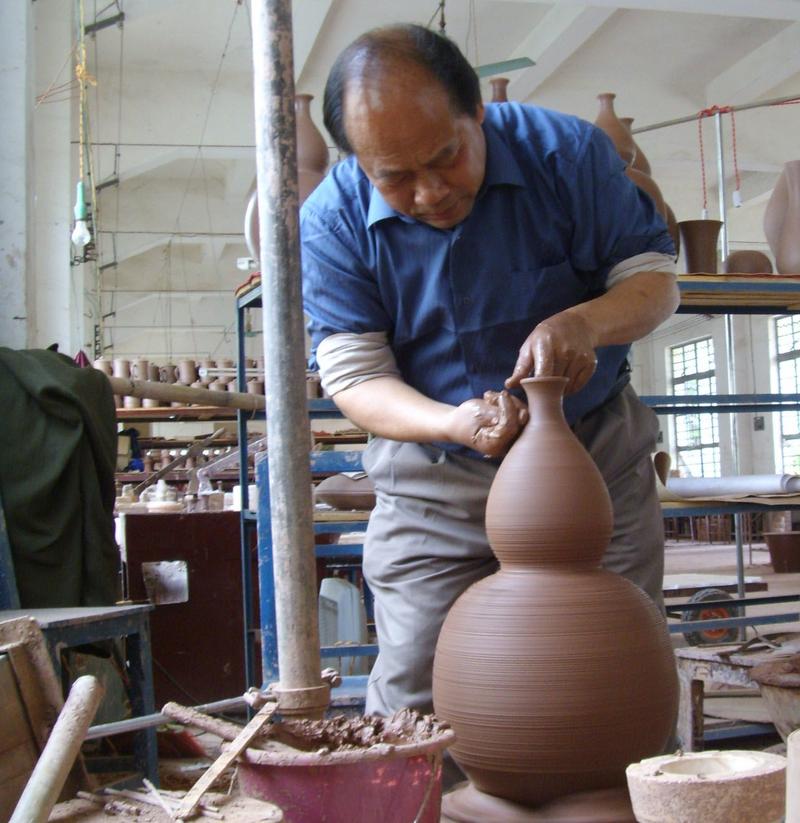 Artist Li Renping has dedicated more than four decades of his life to revitalizing Nixing pottery that dates back 1,300 years. (PHOTO / CHINA DAILY)

Li Renping wipes the sweat from his forehead as he walks in from the sweltering interior of the Nixing Pottery Museum in early July.

Tucked away in a quiet corner of Qinzhou, Guangxi Zhuang autonomous region, the museum that Li and his friends set up in 2007 features the history, culture and production of Nixing pottery that has a history dating back more than 1,300 years.

The pottery uses two types of local clay that are mixed to a certain ratio, which ensures a hard and compact texture combined with a smooth-looking surface.

Wearing a casual outfit and a pair of brown plastic sandals, the 72-year-old has an unadorned earthy quality that doesn't do justice to the many honors piled on him over the years, including a national applied arts master and an inheritor of national intangible culture.

Li was evidently more in his element when he sat down and talked to China Daily about Nixing pottery, an art form he has committed more than four decades of his life to developing.

One of the charms of Nixing pottery is that the colors emerge during the firing process without any additional pigment, he explains.

"You can see many colors in transition, from a black-green to bronze and then to a purplish red," Li says. 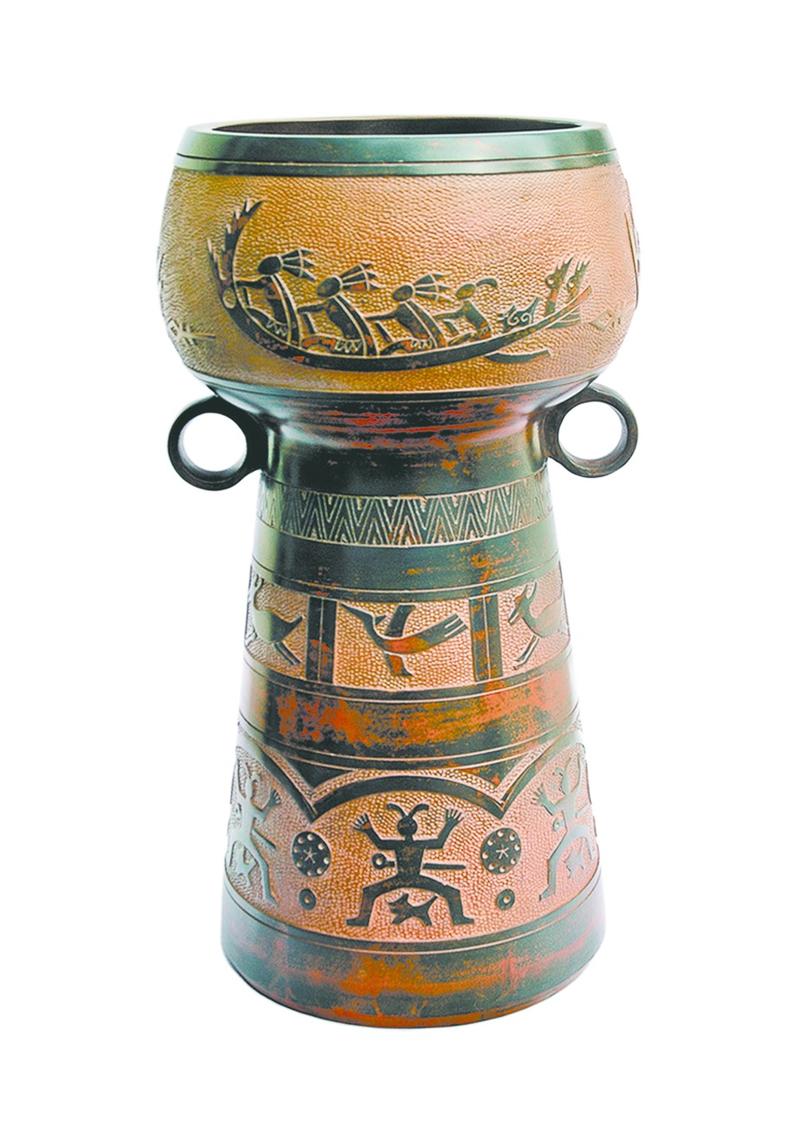 The pottery has no toxins, doesn't require glazing like porcelain and retains its natural small pores that can allow the air to permeate while still holding water.

"You could use it as a flowerpot and it wouldn't smell for years," Li adds.

A love of painting and sculpting predisposed Li to learn the art of Nixing pottery-making back in the 1970s.

"The clay is ideal for precision sculpting," Li says. "You can sculpt the tiniest characters and such delicate patterns that require a magnifying glass to appreciate."

As a boy, Li used to swim across a river to see experienced artisans making their pottery, and he would play with the clay and try to follow suit.

He started working at a local Nixing pottery plant in 1973, where he managed to master all pottery modeling and decoration methods within the space of a year.

The training was supposed to take three years to complete.

"I loved pottery so much that I put a lot of extra effort into it," Li says.

It didn't take long before Li made his way up to become a workshop director.

In 1981, opportunity knocked on Li's door, helping him to grow from being an employee in a pottery plant to an artist later in life.

His hardworking attitude and knowledge of exquisite Nixing pottery techniques then impressed visiting experts from the Central Academy of Art and Design, the predecessor of Tsinghua University's Academy of Arts and Design.

The Beijing institution took him in and systematically taught him about the art of pottery.

Li didn't waste a minute during his stay at the academy and completed the four-year curriculum in two years.

"Working at the plant made me better understand the theories behind pottery and how to put them into practice," Li says.

He returned to the Qinzhou plant after he finished his studies in Beijing to work in pottery design and development.

He would make several items on a daily basis.

"If you love the industry, you won't have any distracting thoughts," Li says. 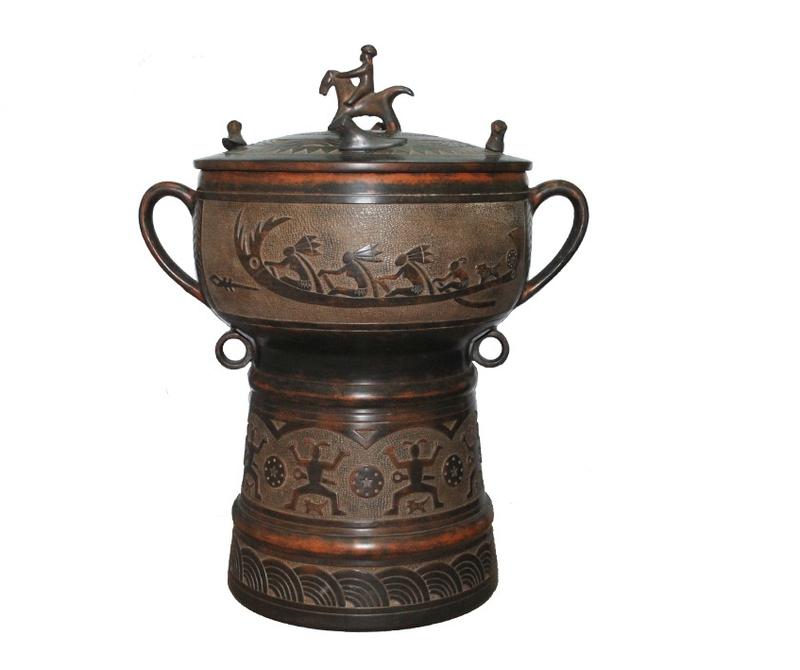 Li managed to produce more than 20 Nixing pottery products that won national awards by the end of the first year back then and helped the plant to raise its annual output from 2 million yuan (US$294,600) to 6 million yuan.

For example, teapots should be not just pleasing to the eye, but also user-friendly, he explains.

"It should be easy to hold and keep the water flow on track, and its price should also be well within a consumer's budget."

Despite Li's feat, the Qinzhou plant faced trouble in the late 90s when China's State-owned businesses went through a period of restructuring.

"Production was halted due to a lack of innovation (in management) and debts," Li recalls.

So, Li took money out of his own pocket and set up a small workshop with several people from the business.

In the beginning, they had to trek tens of thousands of kilometers to find brick kilns to fire up the raw clay models they made.

In 2000, Li brought in electric kilns from Jiangxi and Guangdong provinces, and conducted technical renovations to make them suitable for Nixing pottery production.

Through a process of trial and error, Li managed to raise the yield rate of their high-end products to more than 90 percent.

From that point on, Li never looked back when it came to dreaming of new creations.

He has designed more than 600 Nixing pottery pieces to date, and more than 60 have received awards both at home and abroad. Several pieces have been collected by national museums in more than 20 countries.

In particular, the piece gaoguhuazun (high drum flower vessel), which artistically integrated ethnic Zhuang and Yao elements with a modern touch, received a UNESCO Seal of Excellence for Handicrafts award in 2006.

Moreover, Li's efforts have helped to popularize Nixing pottery culture and given the local pottery industry a shot in the arm.

To date, the number of Nixing pottery plants in Qinzhou has grown from a handful to more than 500, employing over 10,000 locals.

"More than 30 employees from our plant have set up shop themselves," says Xiao Wensheng, head of office of the Guangxi Qinzhou Nixing Pottery Art Co, of which Li is a shareholder. 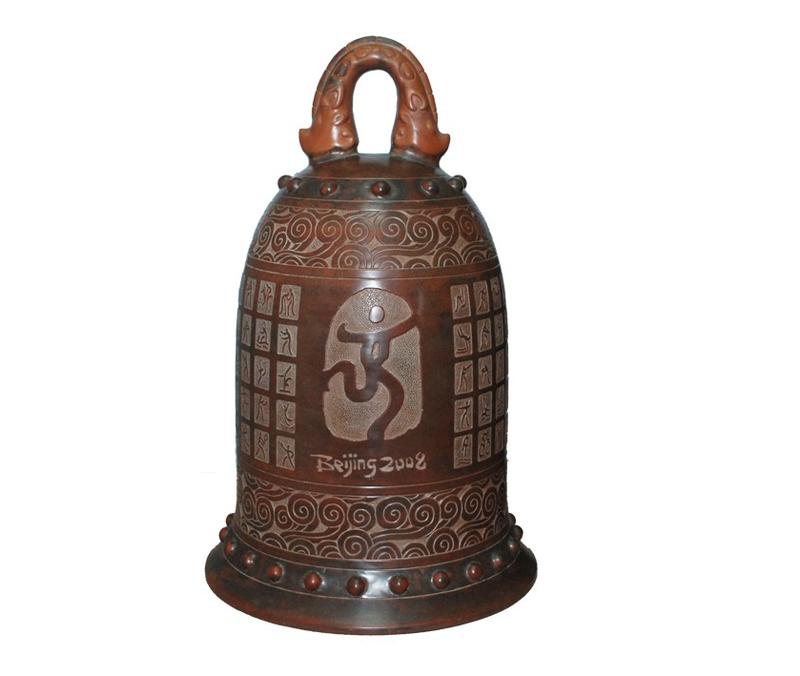 And more people are warming to the ancient art form. About 200 to 300 people visit the Nixing Pottery Museum at Li's factory every day, according to Xiao.

Visitors are able to study every aspect of the pottery process and how a Nixing piece is made from start to finish. They can even try their hand at making one of their own at the end of a tour.

"For us, the design is the most difficult part, and it all derives from traditional Chinese culture," says Yang Huanbin, who has been working at Li's company since 2008.

He was carving fish out of a surface of giant clay pot that was intended to preserve tea earlier this month.

"We draw cultural elements that can fit the purpose of modern use," the 40-year-old says.

The artists shape Nixing pottery pieces as tall as a two-meter vase and as small as a delicate teacup.

The Qinzhou city government has also invested more than 1 billion yuan in developing a Nixing pottery cluster, and many artists have already moved to the area.

Li has now placed his focus on the development of the Nixing pottery industry as a whole. He has been helping local pottery businesses to better inherit traditional pottery making techniques and introduce modern management systems since 2007.

Product design and functionality are becoming more detail-oriented as the digital era evolves, he says.

"Young people have better ideas, and take in things more quickly," Li says, adding that they will be the key to carrying forward the ancient art.

Zhang Li contributed to this story.