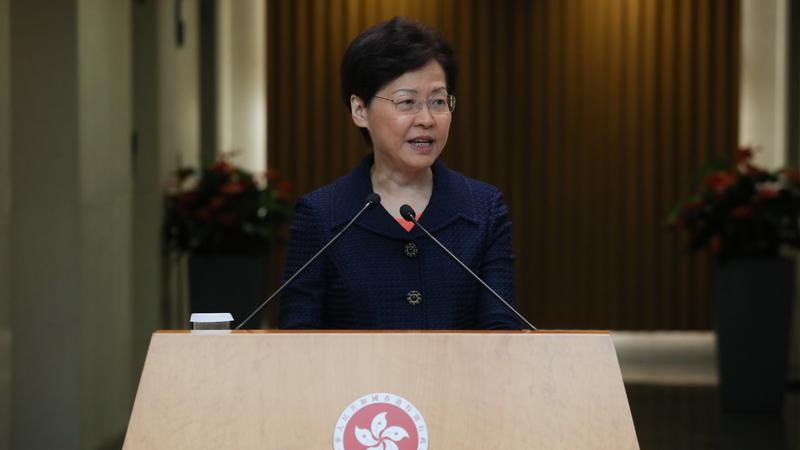 Hong Kong's district councilors on Wednesday called their meeting with the city's leader "a good start" to break the impasse and hope the government will go into the community and talk directly to the people more often.

They made the remarks after meeting Chief Executive Carrie Lam Cheng Yuet-ngor and some other high-level government officials at government headquarters.

To bring back peace and order in the city, they suggested the government adopt stricter law enforcement and introduce anti-mask legislation that would ban protesters from wearing masks to conceal their identities in public demonstrations.

About 100 district councilors attended the two-hour meeting. Among them, 38 were chosen to convey their voters' concerns and suggestions to the government on topics that included the housing shortage, youth development and elderly welfare.

After the meeting, Kwun Tong district Councilor Frankie Ngan Man-yu expressed hopes for the government to make such meetings routine.

He said the meeting laid solid groundwork for the government's following dialogues with the public.

The government is set to hold its first meeting for an open dialogue platform it planned to establish next week. About 100 to 200 people are expected to attend. It was part of the government's efforts to help the city move forward after more than three months of chaos and violence that have rocked the city.

In her speech at the meeting, Kowloon City district Councilor Priscilla Leung Mei-fun advised the government to adopt a more proactive manner to end violence, such as introducing the anti-mask legislation and establishing a designated court to handle the riot cases.

Lam, in her closing remarks before the meeting ended, said breaking the deadlock needs strict and impartial law enforcement, as well as open dialogues

Islands District Council Councilor Bill Tang Ka-piu said the discussion went on in an orderly manner, enabling councilors to fully and freely express their views without any disruptions.

He hopes the government continues the endeavor and kick off dialogues with more extensive sectors.

During the meeting, Lam said during the past three months, Hong Kong has been hit hard "in an unprecedented way" in the wake of a spate of violent protests.

Lam, in her closing remarks before the meeting ended, said breaking the deadlock needs strict and impartial law enforcement, as well as open dialogues.

The government is set to find out the deep-seated issues in politics, economy and people's livelihood, which triggered and fueled the protracted chaos, Lam said.

Reiterating the most pressing task is to end violence and restore law and order, Lam said her administration will directly talk to people from various backgrounds, and listen to their suggestions on deep-rooted social problems and the upcoming Policy Address.

Also, Lam stressed that "one country two systems" remains the cardinal principle in maintaining Hong Kong's prosperity and stability, and the rule of law is still one of the core values of the city. The government will always uphold principles and value in handling social problems, she pledged.