By Dong Leshuo in Washington 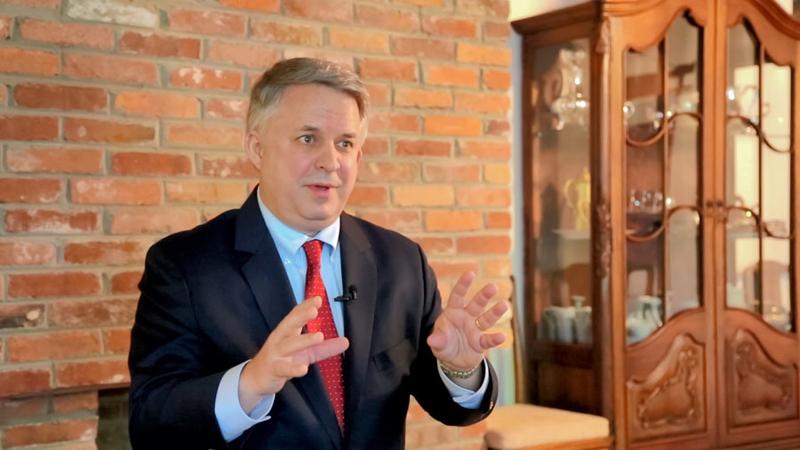 Former US diplomat Jeff Moon had not planned to visit the Chinese mainland when he took a gap year in 1984 to travel Asia. But when he got to Hong Kong, he heard Beijing was issuing tourist visas, so he changed his plans.

He spent a month touring the mainland alone by train, stopping at Beijing, Wuhan, the historic cities of Xi'an and Luoyang, Chengdu and Chongqing in the west, and Lhasa in the Tibet autonomous region.

"During that period, China was starting its reform and opening-up, but the door was not quite open, just a little bit," said Moon, who has lived in China on and off since the '80s, initially serving as a senior diplomat and later returning as an executive in the private sector.

"Whenever I stopped on the street doing anything, a crowd gathered around me. They would just stare at me," he said. "People were very helpful. They wanted to help me. We didn't speak the same language."

During his visit to Chengdu, the capital of Sichuan province, he recalled an "enormous crowd" gathering when he attempted to buy a coat. "They were helping me to make the purchase," he said.

The trip was Moon's first taste of the Chinese mainland. He returned in an official capacity in 1995, when he was appointed second secretary at the US embassy in Beijing.

He said the country's transformation was immediately obvious.

"The first time I was in Beijing, there were no cars, they were all on bikes. There were plenty of cars by 1995," he said. "The bicycle lanes were all small and on the side, and the car lanes got a lot bigger. That's a metaphor for how much China had changed."

This time, he saw no crowds gathering around foreigners, while more hotels and restaurants were catering to overseas visitors.

ALSO READ: How China opened its doors to world

After two years at the embassy, Moon was reassigned. He spent the next six years in various diplomatic roles, including as deputy director of information resources management for the US Secretary of State's office.

"The Chengdu that I knew then has now doubled. I went back a few years ago, and the size of the city has been doubled and is totally different," he said. "It was a small town. Now, it's a major city."

Chengdu, well-known as the home of pandas, is today the fifth-most populous city in China.

Moon has also witnessed firsthand the country's urbanization, including in Chongqing, a city of geographical and historical importance that for years remained economically underdeveloped. "During the time I was there, Chongqing was a construction project," he said. "The entire city was being rebuilt. It was just astounding."

Chongqing was designated in 1997 as one of four municipalities directly under the administration of the central government. Today it is a major metropolis, with GDP reaching US$288.82 billion in 2017.

Another thing that impressed Moon about China was the number of airports that had opened. "In several cases, they just took off the top of the mountains and put an airport on top," he said.

Moon said the high-speed railway between Chengdu and Chongqing had dramatically cut the commuting time.

China will meet its goal to become a prosperous society with lots of potential, and you have an incredible knowledge base - the Chinese people and lots of talent that can be deployed

"That's been replicated all throughout China," he said. "That kind of infrastructure advancement has alleviated poverty and fueled China's economy."

On his most recent trip to the country, about a year ago, Moon noted how many areas of Beijing are now "cashless". He said: "That had just happened within the last year. Again, it's a symbol of the kind of change and a pace of change, and the unpredictability of change."

After several more assignments with the US government, including as charge d'affaires in Nepal and deputy executive secretary of the National Security Council at the White House, Moon moved to the private sector in 2009, joining Cisco Systems as vice-president of Asia-Pacific policy and government affairs.

As China was already emphasizing innovation and providing subsidies for tech companies, Cisco was keen to work closer with Chinese partners. However, Moon said the process faced challenges.

"The problem was we used the same terms in English and Chinese, but they meant completely different things," he said.

According to his understanding, innovation in China is mainly planned by the government, which has priority sectors and chosen entities. But innovation in the US starts at the grassroots and rises, he said.

Moon, who now runs his own independent consultancy, China Moon Strategies, said he believes the future looks bright for China, but he still expects there to be challenges.

"China has now become the second-largest economy, and in the coming decades it will be the largest economy. So, China's leadership has much more responsibility down the road," he said.

He said two major challenges for the country are its aging population and the environment. "I know China has made progress, but there is a lot more to do inside China for the interests of the Chinese people," Moon said. "China will meet its goal to become a prosperous society with lots of potential, and you have an incredible knowledge base - the Chinese people and lots of talent that can be deployed."

Speaking on the current state of China-US relations, the former diplomat said the Trump administration is the most conservative he has ever seen. He argues it has been a mistake for the US to try to roll back globalization.

"That's going to be changed in the longer term by facts on the ground," Moon said. "By definition, we're going to become much more globalized.

"Even if a leader decides that the US and China should somehow disengage, we may be disengaged but we will bump up against our neighbors wherever we go. To me, that's pointless."