WHO recommends ramping up Ebola vaccine after Congo cases surge

In this Sept 9, 2018 photo, a health worker sprays disinfectant on his colleague after working at an Ebola treatment center in Beni, eastern Congo. (AL-HADJI KUDRA MALIRO / AP)

GENEVA — World Health Organization experts recommended on Tuesday a dramatic expansion of vaccination against Ebola in Congo after a surge in cases showed that the strategy of vaccinating those known to be exposed to the disease was no longer sufficient.

WHO says more than 111,000 people have been vaccinated since August. So far 1,045 of the 1,572 people with confirmed or probable Ebola have died in the outbreak

Health workers fighting against the second worst Ebola epidemic in history are now implementing a "ring" strategy, vaccinating anyone directly exposed to known cases of Ebola, and a second ring of those exposed to people in the first ring.

But after four weeks of sharp increases in cases, the World Health Organization's strategic advisory group (SAGE) of outside experts said the vaccine programme was no longer big enough.

A large share of new cases are now occurring in people who were not known contacts of earlier patients, and the disease is spreading to areas where it is impossible to trace contacts and swiftly vaccinate them.

It recommended a number of changes, including expanding vaccination to a third ring of people exposed to those in the second ring, and "geographic" vaccinations that would target everyone at a location without trying to track their exposure. 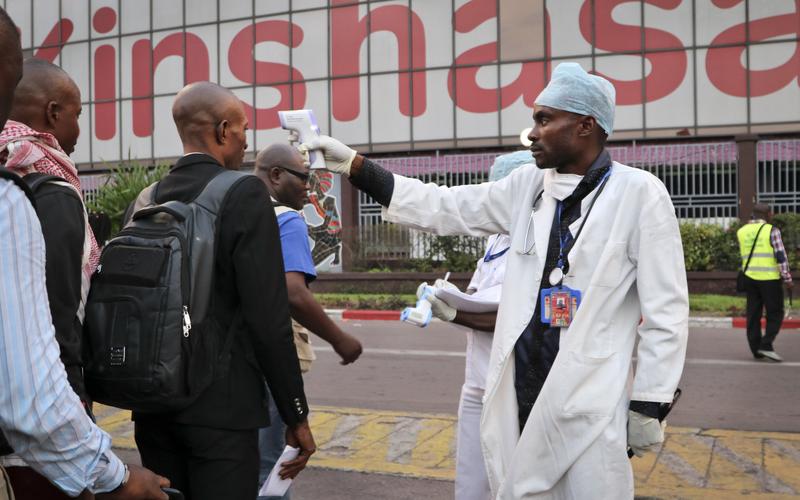 In this June 2, 2018 photo, a health worker checks the temperature of people disembarking from a plane at the airport in Kinshasa, Congo. (SAM MEDNICK / AP)

To prevent supplies of the vaccine, made by Merck, from running out in a much larger vaccination programme, it recommends using smaller doses. A second experimental vaccine made by Johnson & Johnson should also be rolled out.

"We know that vaccination is saving lives in this outbreak,” WHO Director-General Tedros Adhanom Ghebreyesus said in a statement.

"We also know that we still face challenges in making sure the contacts of every case receive the vaccine as soon as possible. These recommendations account for ongoing insecurity and incorporate feedback from experts and from the affected communities that will help us continue to adapt the response."

WHO says more than 111,000 people have been vaccinated since August. So far 1,045 of the 1,572 people with confirmed or probable Ebola have died in the outbreak, which has hit areas long prone to unrest. 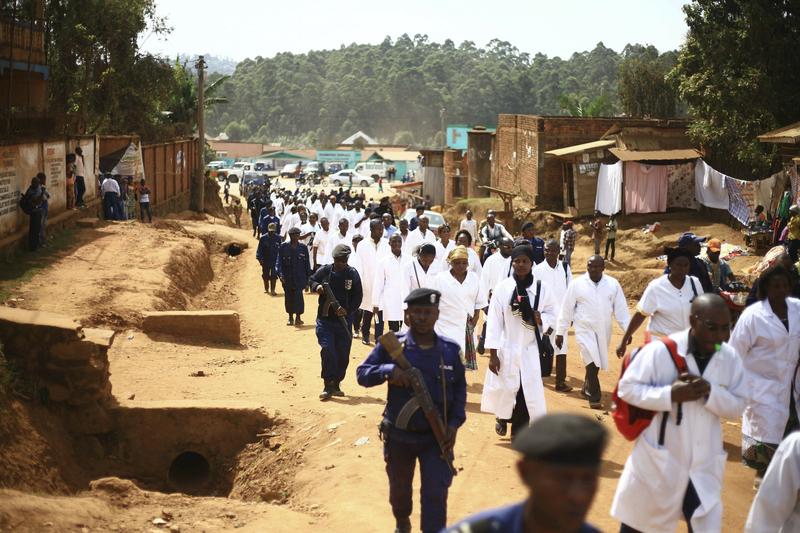 Doctors and health workers march in the Eastern Congo town of Butembo, April 24, 2019, after attackers last week shot and killed an epidemiologist from Cameroon who was working for the World Health Organization. (AL-HADJI KUDRA MALIRO / AP)

SAGE said the number of cases had risen rapidly in the past four weeks because security incidents had dramatically affected the tracing and monitoring of people who may have come into contact with Ebola.

The Merck vaccine could run short if the outbreak continues, and doses should be halved to 0.5 ml for the primary and secondary rings, SAGE said, while they also proposed vaccination of a tertiary ring of contacts, who would receive 0.2 ml.