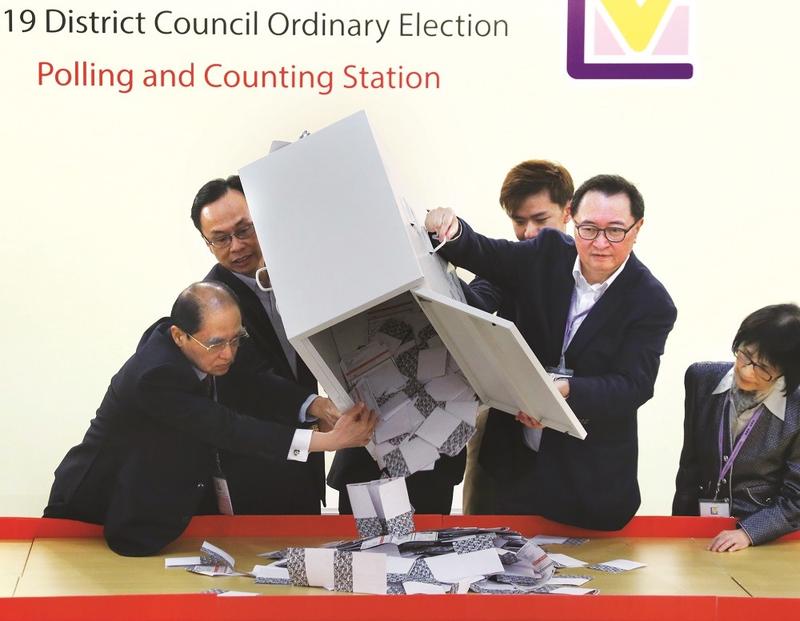 Hong Kong’s District Council Election ended orderly and peacefully on Sunday — as the government made an all-out effort to ensure safe and fair polls despite months of violent protests in the city.

A record 2.94 million people, or 71.2 percent of registered voters, cast their ballots on Sunday to elect district-level affairs representatives since the first local elections were held in 1982. The figure for the last elections in 2015 was about 47 percent.

Long queues were formed at polling stations. According to election authorities, as of 1:30 pm, more voters had cast their ballots than the total amount in the 2015 local elections.

Although the government faced an “extremely challenging situation” in organizing this year’s elections, these efforts had ensured a peaceful and calm environment on Sunday, Lam noted.

A calm, orderly election is expected to break the current impasse in Hong Kong and restore peace to the city, Lam said. She had appealed to every registered elector to vote — stressing that the government would respect their choices.

On polling day, about 20,000 civil servants worked in polling stations to assist voters and also to maintain order. Each polling station had at  least two riot police officers on duty.

Due to the record numbers of candidates, registered voters and turnout, competition between the pro-establishment camp and the opposition was fierce. Analysts believe the opposition camp wants to exploit the current political turmoil to have a greater say in district council issues.

Starry Lee Wai-king, chairman of the Democratic Alliance for the Betterment and Progress of Hong Kong — the SAR’s largest political party — said on Sunday afternoon the party faced a very worrying situation.

Lee made an urgent call to all peace-loving residents to come out and vote for DAB candidates in different districts.

Leung Kwok-hung, a former legislator with the opposition camp, competed with Lee in the same constituency. On Sunday, Leung disrupted Lee’s press briefing and blocked her from leaving.

Lee expressed indignation about Leung’s harassment and stressed that the election should be conducted fairly.

Gary Chan Hak-kan, vice-chairman of the DAB, said he saw people repeatedly queue up at polling sites; a few in line were forced to give up on voting due to the extra waiting time.

Pro-establishment lawmaker Elizabeth Quat Pui-fan said she had received multiple complaints from local residents, including senior citizens who gave up due to fatigue as they had also been waiting too long.

In the five months of violent protests which have rocked the city, the DAB has been one of major victims. Even before the election, more than 100 DAB councilors’ offices were vandalized and their phone lines and network cables were deliberately cut off before polling day.

With his office vandalized four times, Holden Chow Ho-ding said he hopes all those people who oppose violence and want order restored will vote.

“I hope our residents will come out despite the ‘black terror’ and use their votes to help end the violence.”

After receiving some 3,600 election-related complaints during the day, Barnabas Fung Wah, chairman of the EAC, said the watchdog would follow up on all relevant cases.