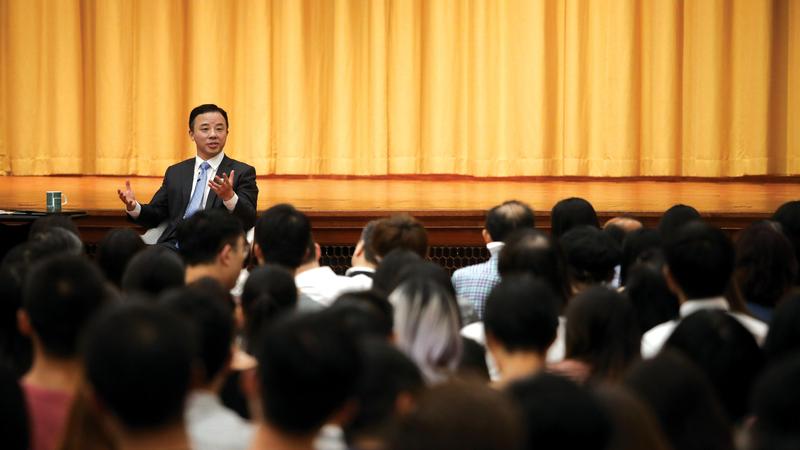 HONG KONG - In a rare open dialogue between university leaders and students in Hong Kong, University of Hong Kong Vice-Chancellor Zhang Xiang on Thursday reiterated his firm stand against violence, saying that constructive conversation is the way to find common ground in society.

Zhang made the remarks at an open forum with some 400 students, alumni and faculty members on Thursday evening. He agreed to hold the forum after some 300 students besieged his residence on Friday night, demanding the withdrawal of his July 3 statement condemning the violence in the storming of the Legislative Council building by hundreds of radical protesters on July 1.

At the forum, Zhang Xiang made it clear several times that he stands against violence of any kind, by any party, and at any time, as expressed in his earlier open letter

At the forum, Zhang made it clear several times that he stands against violence of any kind, by any party, and at any time, as expressed in his earlier open letter.

“Violence is definitely not a solution at all,” Zhang said. “I maintain my stand of condemning violence,” the university leader said.

Zhang said tolerance of violence would only lead to bloodshed, and noted that violence in protests has been getting worse in the past two weeks, culminating in bloodshed in the clash with police in Sha Tin on Sunday.

He stressed the importance of constructive dialogue allowing people to work together and seek common ground.

Zhang pledged to communicate more with students in the future to learn what they are thinking about.

He also hoped the dialogue could help the government to learn the true voice of today’s youth.

During the 90-minute forum, some 14 attendants raised questions during the one-hour question-and-answer session.

Cheng Zixi, a postgraduate student of education at HKU, said she thought the forum was a great opportunity for people with different views to better understand each other. But she disagreed with some students’ demand that the vice-chancellor support student protesters unconditionally.

Illegal acts should not be tolerated under any circumstances, Cheng said.

Benny Wong, a sophomore in science at HKU, agreed that more dialogues with the vice-chancellor should be helpful.