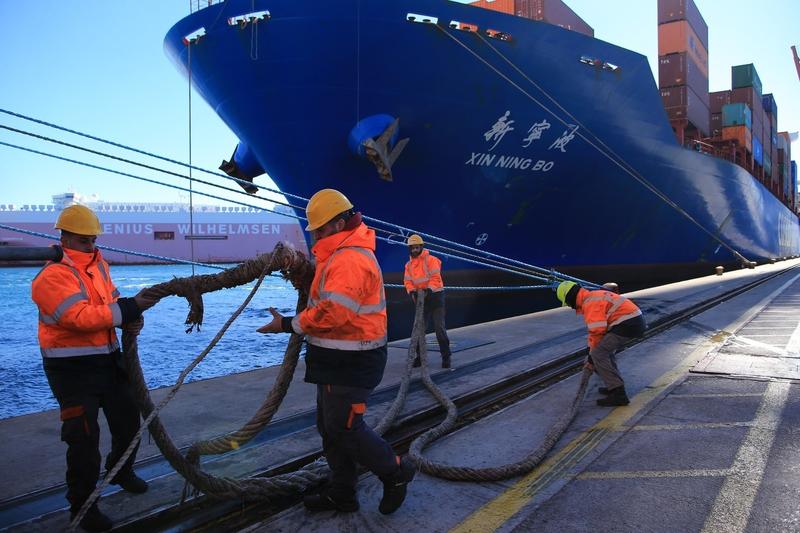 This undated photo shows employees berthing a container ship at the port of Piraeus in Greece. (PHOTO / XINHUA)

Thousands of years ago, the Greek port of Piraeus was the home of the Athenian navy which defeated the Persian empire in the decisive Battle of Salamis.

Today, it is the largest port in Greece and became privatized in 2009 after the government's debt crisis.

It seemed like a mission impossible to turn a port with an annual capacity of just 685,000 TEUs (twenty-foot equivalent units) into one with 5 million TEUs in less than eight years.

That mission has been accomplished and a more ambitious role for the port is in the offing, the chairman of its operator China COSCO Shipping Corp Ltd said.

The Belt and Road Initiative has brought great opportunity for companies involved in (the) port and shipping business, as it creates a platform for industrial collaboration and local development.

"Since COSCO Shipping's participation into the privatization of the port in 2009, the group contributes 300 million euros (US$336.9 million) to the local economy on an annual basis, and has created more than 3,100 job opportunities along with more than 10,000 new posts brought about indirectly," said Xu Lirong, the chairman of COSCO Shipping.

The port was ranked No 93 in 2009, when COSCO Shipping took over operations in a 35-year lease contract.

Piraeus was named the port with fastest growth among all global container terminals in 2011 and 2012. Annual losses have been erased and profits reached more than 70 million euros as of 2018, with its global ranking having climbed to 36th.

An analysis of Piraeus by a Greek think tank, the Institute of Economy and Industry, predicted the port's fiscal revenues will eventually increase to 474.7 million euros, provide 31,000 jobs, and raise the GDP of Greece by 0.8 percentage point.

The port will also play a vital role in raising Greece's logistics sector output value from 400 million euros in 2015 to 2.5 billion euros by 2025, the report added.

"More changes are expected to take place in the local economy as COSCO Shipping is (aiming) to develop the port of Piraeus into the largest port in Europe with an annual capacity of 10 million TEUs," said Xu.

COSCO Shipping has invested 55.8 billion yuan (US$8.12 billion) in the past few years in countries and regions related to the Belt and Road Initiative through the development of terminals, shipping routes and logistics.

Currently, the group is operating 174 container liner routes (1.61 million TEUs) in countries and regions related to the BRI, accounting for 58 percent of COSCO Shipping's total container capacity. As many as 12.15 million TEUs of containers were handled by COSCO Shipping in the BRI region throughout 2018, up 9 percent year-on-year.

"The Belt and Road Initiative has brought great opportunity for companies involved in (the) port and shipping business, as it creates a platform for industrial collaboration and local development," said Yan Jun, president of the Shanghai International Port Group.

"At a certain point, many ports are expecting transformation from conventional business, and the Belt and Road Initiative presents an opportunity for port operators to make the transition easier and more smooth," said Zhou Dequan, a research director of the Shanghai International Shipping Institute.

To date, COSCO Shipping has invested in 18 terminals in countries and regions related to the BRI, including Belgium, the Netherlands, Greece, the United Arab Emirates, Spain, Singapore, Turkey and Peru, with more in the pipeline.