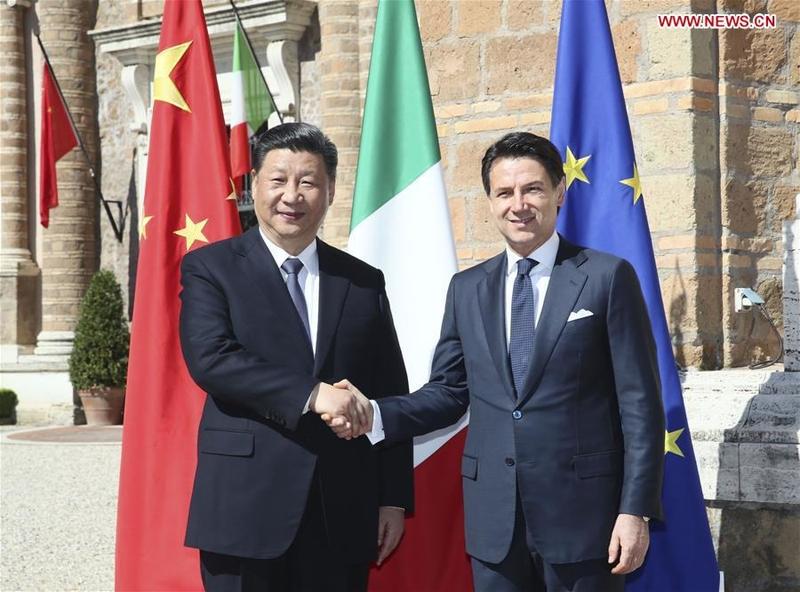 ROME - Chinese President Xi Jinping left the Italian capital of Rome on Saturday, after holding talks with Italian leaders and witnessing the signing of multiple bilateral cooperation documents, including a memorandum of understanding (MoU) on jointly advancing the construction of the Belt and Road.

"I have held in-depth and friendly talks and meetings with Italian officials, including the president," Xi said referring to his on-going four-day state visit to Italy. Before leaving, He attended a grand seeing-off ceremony hosted by his Italian counterpart, Sergio Mattarella.

Saying "the mutual trust and the practical cooperation between our two sides in various areas have been deepened," Xi called on China and Italy to further intensify high-level exchanges to advance their comprehensive strategic partnership to a new level

Saying "the mutual trust and the practical cooperation between our two sides in various areas have been deepened," Xi called on China and Italy to further intensify high-level exchanges to advance their comprehensive strategic partnership to a new level.

MOU ON BELT AND ROAD SIGNED

Xi's stay in Rome was highlighted on Saturday by the signing of the MoU for China and Italy to jointly push forward the construction of the Belt and Road.

China and Italy realize the huge potential of the Belt and Road Initiative (BRI) in promoting connectivity, wrote a joint communique issued by the two countries.

The two sides stand ready to strengthen the alignment of the BRI and Trans-European Transport Networks, and deepen the cooperation in ports, logistics, marine transportation and other areas, according to the document.

The BRI, first proposed by Xi in 2013, refers to the Silk Road Economic Belt and the 21st Century Maritime Silk Road, and aims to build a trade and infrastructure network connecting Asia with Europe, Africa and beyond.

China and Italy were at the two ends of the ancient Silk Road, thus they have every reason to carry out cooperation on the Belt and Road, Xi said when meeting with Italian Prime Minister Giuseppe Conte on Saturday.

"We adhere to the principles of extensive consultation, joint contribution and shared benefits, follow the principle of transparency and openness, and aim for cooperation of win-win results," Xi said. 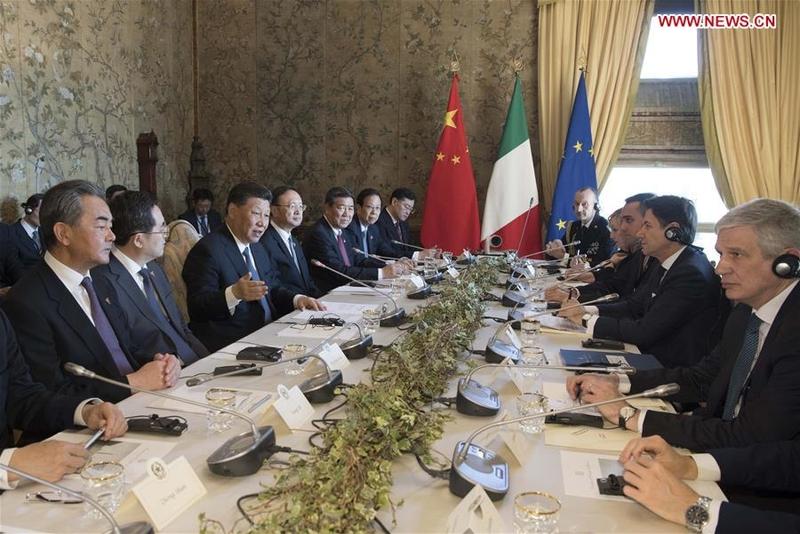 He urged the two countries to take the opportunity of the inking of the intergovernmental MoU on jointly building the Belt and Road to strengthen the alignment of the Belt and Road Initiative (BRI) with Italy's plan to develop its northern ports and the InvestItalia program, and promote mutually beneficial cooperation in all fields.

Conte said Italy is glad to seize the historic opportunity in joining the Belt and Road construction, adding that he strongly believes that it will help fully explore the potential of Italy-China cooperation.

China and Italy were at the two ends of the ancient Silk Road, thus they have every reason to carry out cooperation on the Belt and Road, Xi said when meeting with Italian Prime Minister Giuseppe Conte

The Italian prime minister said he is looking forward to attending the second Belt and Road Forum for International Cooperation next month in Beijing.

The Chinese president and his Italian counterpart agreed at their talks on Friday to jointly push for greater development of the China-Italy comprehensive strategic partnership in the new era.

Xi said that both as countries with an ancient civilization, China and Italy have profound historical relations.

He recalled that for nearly half a century, China and Italy have respected, trusted and helped each other, enhanced high-level exchanges and strategic mutual trust, facilitated communication, cooperation and convergence of interests, and deepened mutual understanding and traditional friendship.

As the world is undergoing profound changes unseen in a century, China is willing to carry forward the spirit of cooperation with the Italian side, strengthen strategic communication, encourage the international community to seek common ground while reserving differences and promote development through cooperation, so as to contribute new wisdom and strength to building a better world, Xi said. 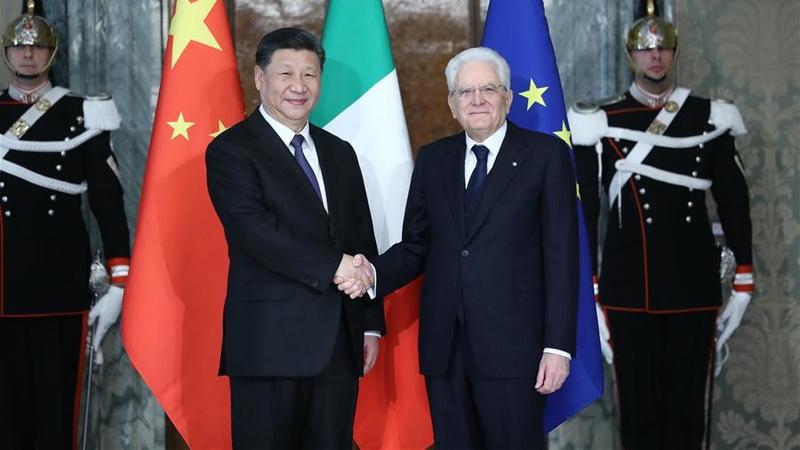 Also on Friday, Xi met respectively with Roberto Fico, president of the Italian Chamber of Deputies and Maria Elisabetta Alberti Casellati, senate speaker, and discussed with them exchanges and cooperation between the two countries' legislative bodies.

Noting that exchanges and cooperation between legislative bodies are an important channel for the two peoples to enhance mutual understanding and deepen friendship, Xi said that China supports the legislatures of the two countries in deepening experience sharing on lawmaking and governance, especially in doing more work for the economic and financial cooperation as well as the cultural and people-to-people exchanges between the two countries.

After Italy, the Chinese president will pay state visits to Monaco and France. Xi's three-nation Europe tour is both his first overseas trip in 2019 and his second trip to Europe in about four months, which testifies to the importance China has attached to its relations with European countries.

When meeting with Conte, the Chinese president called China and the European Union (EU) constructors of world peace, contributors to global development and protectors of international order, saying that the two sides should follow the trend of the times featuring a world of multi-polarization and economic globalization, and push for the construction of an open world economy.

He also urged the two sides to accelerate the negotiations on a China-EU investment agreement, enhance the synergy of the BRI and the EU's development strategies, and boost communication and coordination on major international and regional issues.

When meeting with Mattarella, Xi said China has always supported the European integration and respected the EU's efforts in solving its problems.

He said he hopes that Italy will continue playing a positive role in promoting EU-China partnership for peace, growth, reform and civilization.

After wrapping up his activities in Rome, Xi flew to Palermo, Sicily's regional capital, where he met Nello Musumeci, president of the Italian Region of Sicily.

The Chinese president encouraged Sicily to increase export of quality agricultural products to China and said China is ready to increase cooperation with the Region in areas of investment and tourism.