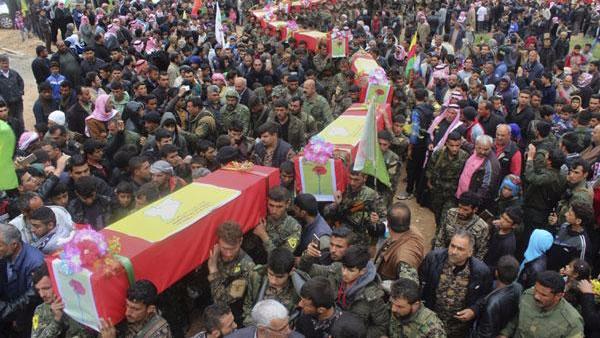 The photo shows fighters from the predominantly-Kurdish Syrian Democratic Forces carrying the coffins of their comrades, who were killed Tuesday by a misdirected airstrike by the U.S.-led coalition, during their funeral procession, in Tal al-Abyad, northeast Syria, Thursday, April 13, 2017. (Hawar News Agency via AP)

ANKARA, Turkey - Turkish warplanes carried out airstrikes on Tuesday against suspected Kurdish rebel positions in northern Iraq and in northeastern Syria, the military said, in a bid to prevent militants from smuggling fighters and weapons into Turkey.

The Britain-based Syrian Observatory for Human Rights, which monitors the Syrian war, also reported the strikes on the media and military targets in Karachok, adding that an airstrike killed three members of the Syrian Kurdish militia known as the People's Protection Units, or YPG.

Ankara says members of the outlawed Kurdistan Workers' Party, or PKK, are finding sanctuaries in neighboring Iraq and Syria, among those countries' own Kurdish minorities.

A Turkish military statement said the pre-dawn strikes hit targets on the Sinjar Mountain in northern Iraq and also in a mountainous region in Syria. It said the operations were conducted to prevent infiltration of Kurdish rebels, weapons, ammunition and explosives from those areas into Turkey.

Although Turkey regularly carries out airstrikes against PKK targets in northern Iraq, this was the first time it has struck the Sinjar region. Turkey has long claimed that the area was becoming a hotbed for PKK rebels.

Last year, Turkey sent troops into Syria to back Syrian opposition fighters in the battle against the Islamic State group and also to curb what is perceives as the territorial expansion of U.S.-backed Syrian Kurdish forces, which it claims are affiliated with the PKK. The Kurdish group, which has led an insurgency in southeast Turkey since 1984, is considered a terror organization by Turkey and its allies.

In its statement, the military vowed to press ahead with operations against the PKK both inside Turkey and across its borders until the "last terrorist is eliminated."

The Syrian Kurdish forces denounced Tuesday's strikes on their positions as "treacherous," accusing Turkey of undermining the anti-terrorism fight.

Aside from aspirations for autonomy, the Kurdish group in Syria is part of the U.S.-led international coalition against the Islamic State militants who seized large swaths of Syria and Iraq in 2014. Since then, the IS has suffered major setbacks at the hands of the coalition, losing large chunks of the territory the Sunni militant group once held. The Syrian Kurdish forces, backed by the U.S.-led coalition, are closing in on IS de facto capital, the city of Raqqa.

"By this attack, Turkey is trying to undermine Raqqa operation, give (IS) time to reorganize and put in danger lives of thousands of" displaced, the YPG said on its Twitter account.