British-US trade deal possible after Brexit, say May and Trump 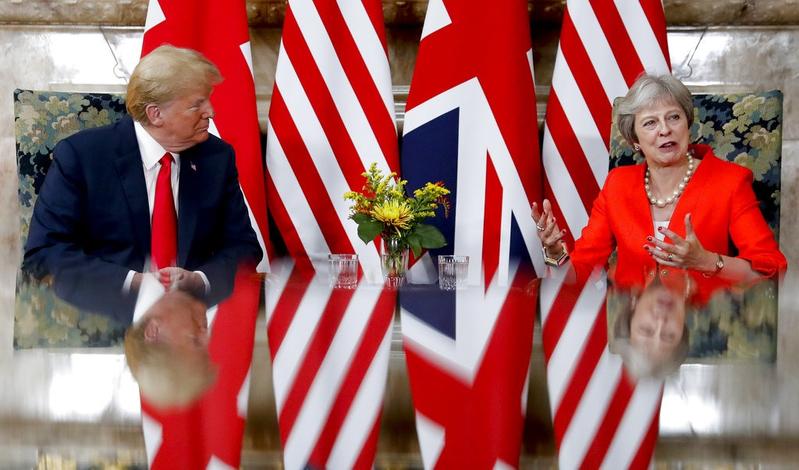 May, speaking at her Chequers country retreat in Buckinghamshire, added that her blueprint for a UK-EU trade deal, agreed by her cabinet at Chequers a week ago, will make a trade deal with the United States possible.

Trump and Theresa May faced the media on the lawn of Chequers, 66 km from central London where tens of thousands of people were staging a march in protest at the visit to Britain.

The two leaders emerged to meet the press after holding bilateral talks in the 16th century mansion house.

Their meeting came against the backdrop of story in tabloid newspaper The Sun in which Trump questioned a trade deal between the United States and Britain if there was a soft Brexit, and also said the former foreign secretary Boris Johnson, would make a good prime minister. 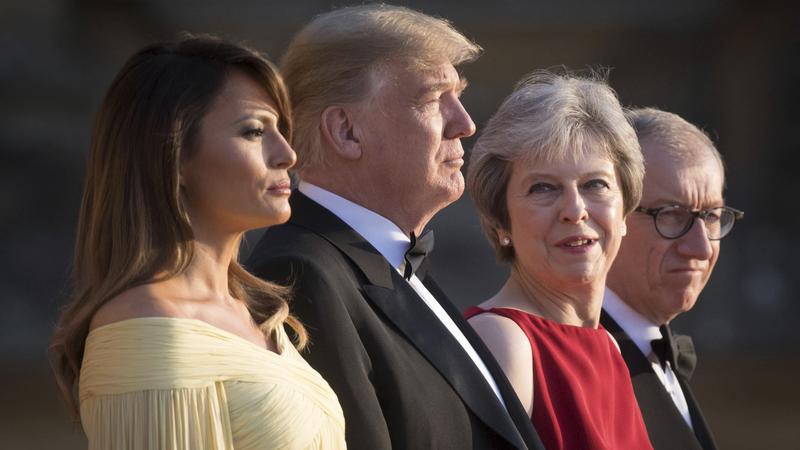 May said there are no limits to Britain doing trade deals once Britain leaves the European Union, adding: "We will do a trade deal with the US and others around the world."

In response to a question about future trade after Brexit, Trump said: "I don't know what Britain is going to do but whatever you do is OK by me. That's your decision, just make sure we can trade together that's all that matters. I believe after speaking with the prime minister's people and trade experts a deal will be possible."

He said May is doing a terrific job and described the Brexit negotiations with the EU as complicated.

On Thursday, Trump told The Sun newspaper — in an interview that was published as he was being feted by May at an opulent dinner at a country palace — that he felt unwelcome in London because of protests, including plans to fly a giant balloon over Parliament on Friday that depicts him as an angry baby in a diaper.

"I guess when they put out blimps to make me feel unwelcome, no reason for me to go to London," he said. 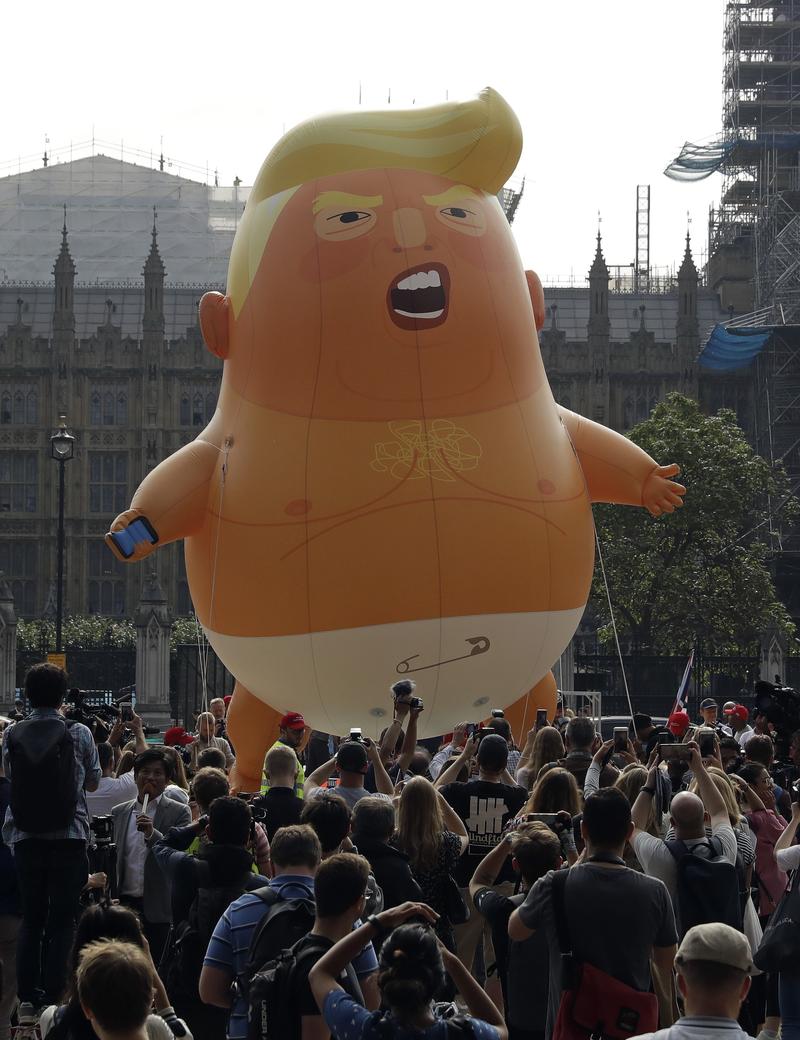 A six-meter high cartoon baby blimp of US President Donald Trump is flown as a protest against his visit, in Parliament Square in London, England, July 13, 2018. (MATT DUNHAM / AP)

Trump, in the interview given before he left Brussels for the UK, accused May of ruining what her country stands to gain from the Brexit vote to leave the European Union. He said her former foreign secretary, Johnson, would make an "excellent" prime minister, speaking just days after Johnson resigned his position in protest over May's Brexit plans.

Trump added that May's "soft" blueprint for the UK's future dealings with the EU would probably "kill" any future trade deals with the United States.

Trump, who has linked his own election to the June 2016 referendum in which a majority of British voters supported leaving the EU, complained, "The deal she is striking is a much different deal than the one the people voted on."

He also told the tabloid that he'd shared advice with May during Britain's negotiations with the EU and she ignored it. 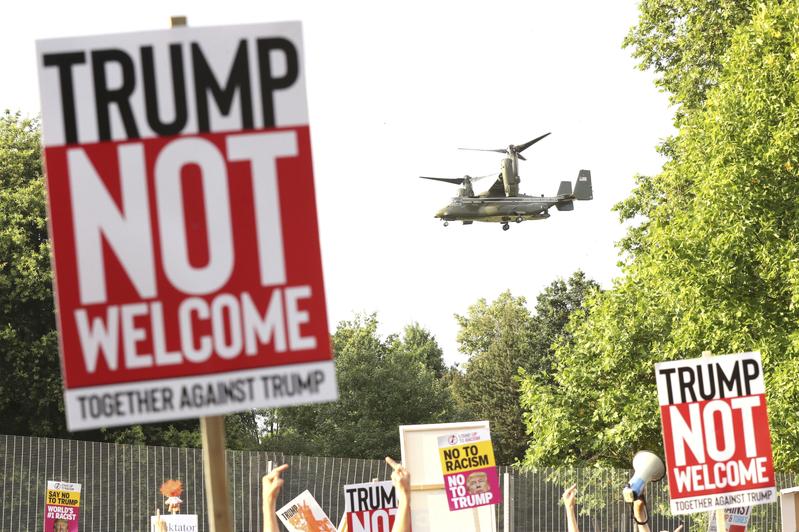 A helicopter leaves the grounds of the US ambassador residence in Regent's Park, London, while demonstrators protest against the visit of US President Donald Trump, July 12, 2018. (GRETH FULLER / PA / AP)

The interview was the latest breach of diplomatic protocol from Trump, whose predecessors tended to avoid criticizing their foreign hosts. Details from Trump's interview with the paper became public as Trump was attending a black-tie dinner with May to welcome him to Britain with pomp and pageantry.

"As he said in his interview with the Sun she 'is a very good person' and he 'never said anything bad about her.' He thought she was great on NATO today and is a really terrific person," Sanders wrote.

On Thursday night, hundreds of demonstrators chanted outside the US ambassador's residence where Trump was staying.

Trump acknowledged he didn't feel welcome in the city, and blamed that in part on Mayor Sadiq Khan, who gave protesters permission to fly the 20-foot-tall balloon depicting Trump as an angry baby.

Trump also blamed recent terrorist attacks there on Khan, who is a Muslim. The president claimed Europe is "losing its culture" because of immigration from the Middle East and Africa.

"Allowing the immigration to take place in Europe is a sham," he said. "I think it changed the fabric of Europe and, unless you act very quickly, it's never going to be what it was and I don't mean that in a positive way."

In contrast to the president's sharp words, Trump's first event in England was an oasis of warm greetings at an evening reception at Blenheim Palace, birthplace of Winston Churchill, the larger-than-life British leader cited by the president as a model of leadership. That was just one of several helicopter rides on the agenda for Trump, whose staff opted to keep him largely out of central London and the swarms of demonstrators who are likely to provide some of the defining images of his first official trip to the UK. 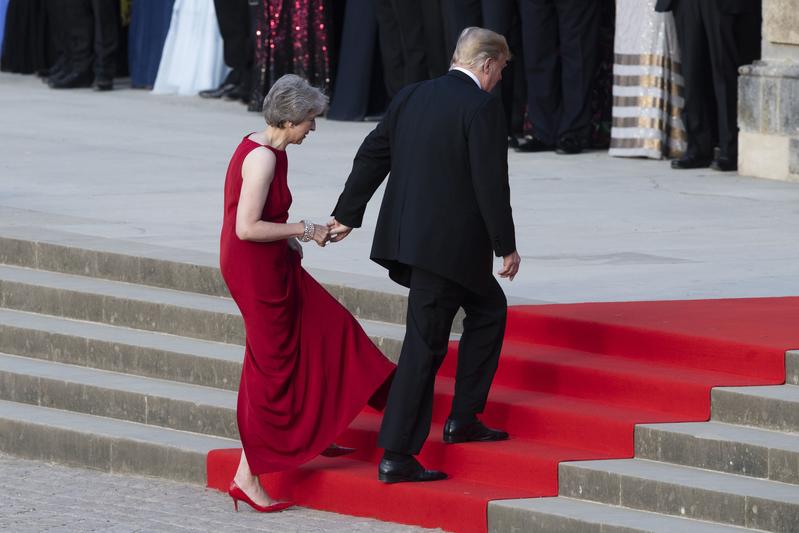 British Prime Minister Theresa May takes the hand of President Donald Trump as they walk up red-carpeted steps to enter Blenheim Palace for a black tie dinner in Blenheim, England, July 12, 2018. (WILL OLIVER / AP)

Trump's Marine One departure from the ambassador's residence was met by jeers from demonstrators banging pots and pans, and another pack of protesters lined roads near the palace. Some of their signs read "Dump Trump," ''Lock Him Up" and "There Will Be Hell Toupee." Police worked overtime, their days off canceled.

Trump was greeted at the palace by May, whose government has been rocked by resignations from ongoing tumult over Brexit.

The outdoor arrival ceremony at Blenheim — Trump wore a tuxedo and first lady Melania Trump a butter-yellow, chiffon, off-the-shoulder gown — was a grand affair marked by a military band in bearskin hats, hundreds of business leaders in black tie and gorgeous setting sunlight.

The mood was far less jovial in Belgium earlier in the day.

During his 28 hours there, Trump had disparaged longtime NATO allies, cast doubt on his commitment to the mutual-defense organization and sent the 29-member pact into a frenzied emergency session. 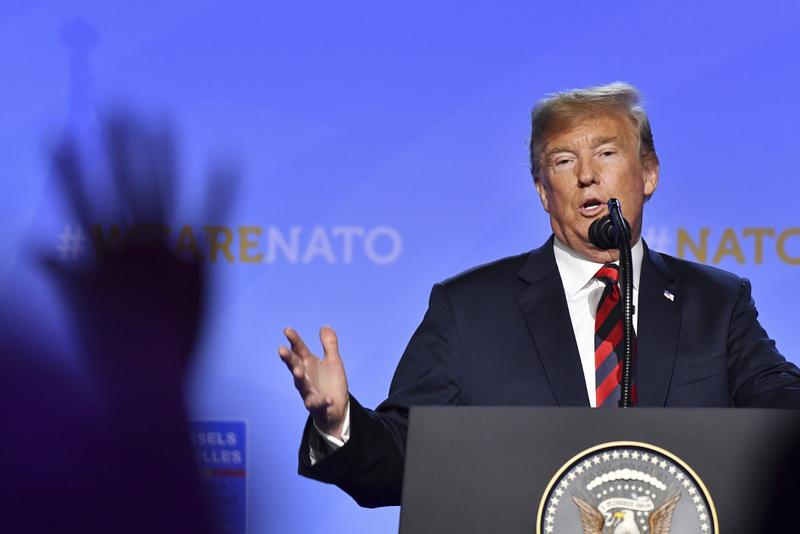 US President Donald Trump speaks during a press conference after a summit of heads of state and government at NATO headquarters in Brussels, Belgium, July 12, 2018. (GEERT VANDEN WIJNGAERT / AP)

Then, in a head-snapping pivot at the end, he declared the alliance a "fine-tuned machine" that had acceded to his demands to speed up increases in military spending to relieve pressure on the US budget. But there was little evidence other leaders had bowed to his wishes on that front.

Trump claimed member nations had agreed to boost their defense budgets significantly and reaffirmed — after days of griping that the US was being taken advantage of by its allies — that the US remains faithful to the accord.

Neither Trump nor NATO offered specifics on what Trump said he had achieved. French President Emmanuel Macron quickly disputed Trump's claim that NATO allies had agreed to boost defense spending beyond their existing goal of 2 percent of gross domestic product by 2024.