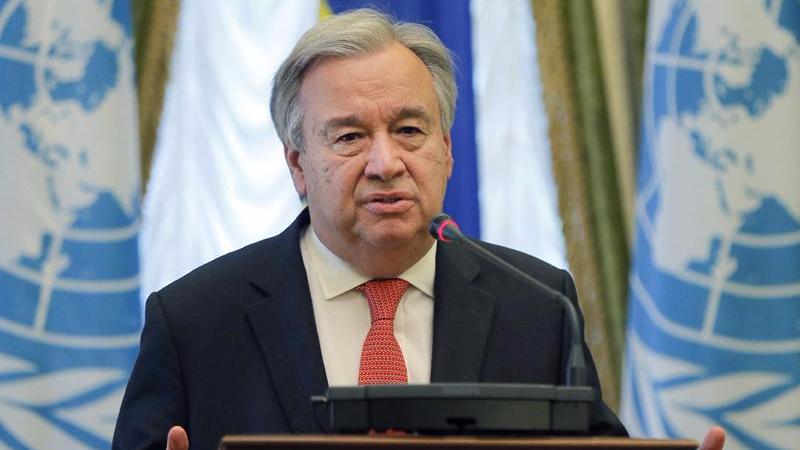 In this July 9, 2017, file photo, United Nations Secretary-General Antonio Guterres speaks during a joint press conference with Ukrainian President Petro Poroshenko in Kiev, Ukraine. Guterres on Nov 20, 2017 deplored the fact that the world is letting children down by  by allowing them to go through hardships and suffering. (EFREM LUKATSKY / AP)

UNITED NATIONS - UN Secretary-General Antonio Guterres on Monday deplored the fact that the world is letting children down by allowing them to go through hardships and suffering.

I am sorry to say that, try as we might, we adults are letting you down

"I am sorry to say that, try as we might, we adults are letting you down," he told a gathering of children at UN Headquarters in New York on the occasion of World Children's Day, which falls on Nov 20.

"Millions of girls and boys like you are in danger, and we are letting them down. They are fleeing deadly conflicts. They are going hungry, or without the medicine they need. They are separated from their parents, or making long, dangerous journeys to safety. They are displaced and living in refugee camps far from home," he said.

"Many are being bullied online or in school, or suffer from discrimination because of their religion, the color of their skin, or their ethnicity. And so often, they are victims of violence or exploitation at the hands of adults."

"All this is completely unacceptable. As a global community, we cannot continue failing all the children," said Guterres.

Every child has a right to a safe, healthy, peaceful childhood and to develop to their full potential, he said. "Today's children are tomorrow's leaders -- tomorrow's presidents and prime ministers, tomorrow's teachers and innovators, tomorrow's mothers and fathers, even tomorrow's secretaries-general of the United Nations."

He promised to "spare no effort to make sure that the United Nations is working every day" for children's best interests.

As part of World Children's Day celebrations, school kids were invited to participate in an event called "Kids Take Over the United Nations Headquarters," where children take up various roles.

Lathitha Beyile, a 14-year-old girl from Johannesburg, South Africa, spoke at the daily press briefing, highlighting issues that children face around the world, including child labor, poverty, lack of education and gender inequality.

"The message on World Children's Day is clear: the world is failing to fully deliver on behalf of the world's children, and we are speaking up on behalf of ourselves and our peers to make the case for why we should do more," she said.

"We shouldn't really judge them harshly and we should be more optimistic about where the world is heading and look at the good that is happening in the world rather than the bad because often you get surrounded by so much negativity that you often don't look at the positivity," she said.