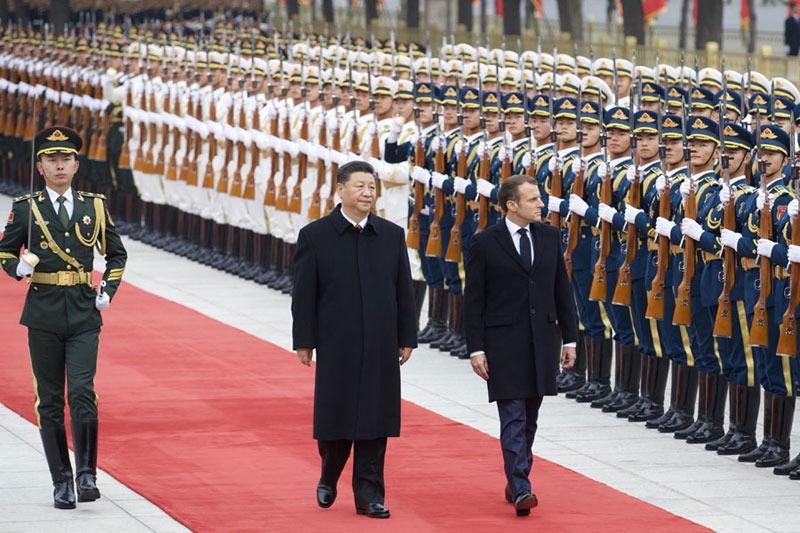 Chinese President Xi Jinping and visiting French President Emmanuel Macron inspect the military at a welcoming ceremony outside the Great Hall of the People in Beijing on Nov 6, 2019. (XU JINGXING AND KUANG LIHUA/CHINA DAILY)

BEIJING - Chinese President Xi Jinping on Wednesday held talks with his French counterpart Emmanuel Macron at the Great Hall of the People in Beijing.

"We have made mutual visits to our respective countries on the 55th anniversary of the establishment of diplomatic relations and lifted China-France ties to a higher level," Xi said.

He pledged to work jointly with Macron to further advance the China-France comprehensive strategic partnership, looking out on the world, the future and the people, and keep the partnership at the forefront of major-country relations.

Xi also said China's successful issuance of 4 billion euros of sovereign bonds in France is a significant move to support Paris in its effort to build itself into an international financial center.

Xi said the country's first euro-denominated sovereign bonds issuance in 15 years is also an important step to deepen financial cooperation between China and France as well as between China and the European Union.

The Ministry of Finance issued the bonds in Paris on Tuesday.

President Xi also said China and France, as two permanent members of the UN Security Council and representatives of Eastern and Western civilizations, should shoulder more responsibilities and exercise their roles as major countries, as the world is undergoing changes rarely seen in a century.

The two countries should maintain their traditions of independent policies and jointly safeguard the international system with the United Nations at the core, the international order based on international law, as well as the multilateral trading regime with WTO rules as the cornerstone, Xi said.