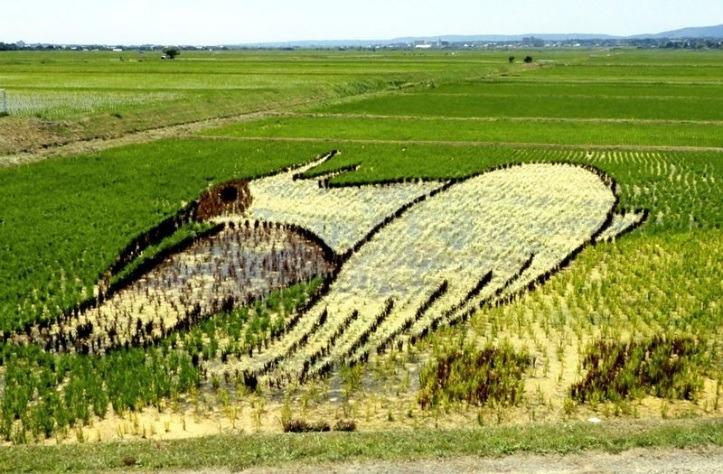 A rice-field artwork depicting a toki crested ibis is seen in a paddy in Sado, Niigata Prefecture, on June 22, 2018. (PHOTO / THE JAPAN NEWS)

SADO — In an underground commercial space of JR Tokyo Station on May 16, a shop selling onigiri rice balls was transformed for a limited time into a specialty retailer of onigiri made of rice from Sado, Niigata Prefecture. Sado Island is known for its toki crested ibises and the brand of koshihikari rice variety used is called Toki to Kurasu Sato (Living in Harmony with Toki). On that first day, the shop recorded its highest sales yet as one commuter after another bought the special onigiri.

The certification system is peculiar to Sado, being the only one aimed at balancing agricultural promotion with environmental regeneration

The rice produced on Sado is highly rated, ranked Special A by the Japan Grain Inspection Association for 13 consecutive years. The Sado brand, however, has been less popular compared with koshihikari rice from Uonuma in the same prefecture. So, in many cases, the Sado rice was simply sold as “Niigata Prefecture rice.”

What boosted it from Sado-grown koshihikari rice to its own brand was the “Toki to Kurasu Sato” rice certification system called Toki Brand Rice Certification Initiative, which is now in its 10th year.

Takayuki Nishimaki, 41, agricultural policy section chief of the Sado municipal government, said that the certification system is “peculiar to Sado, being the only one aimed at balancing agricultural promotion with environmental regeneration.”

Toki had become extinct in the nation. But a pair of crested ibises presented by China in 1999 successfully bred in Sado, the last place Japanese crested ibises had lived. Attention was focused on conserving rice fields that, in the process of realizing the crested ibises’ return to the wild, could become feeding grounds where they could hunt for such creatures as pond loaches, frogs and insects.

The certification system, which was launched by the city in fiscal 2008, calls on farmers to reduce the amount of agricultural chemicals and fertilizers they use to less than half the usual amounts and to take part in biannual research on living creatures in rice fields. Farmers are also called on to tackle at least one of two projects: to fill fields with water even in winter; or to improve their paddies so that creatures can continue to live in them. The first release of the offspring of the crested ibis pair was conducted in September that year, aiming for their successful return to the wild. 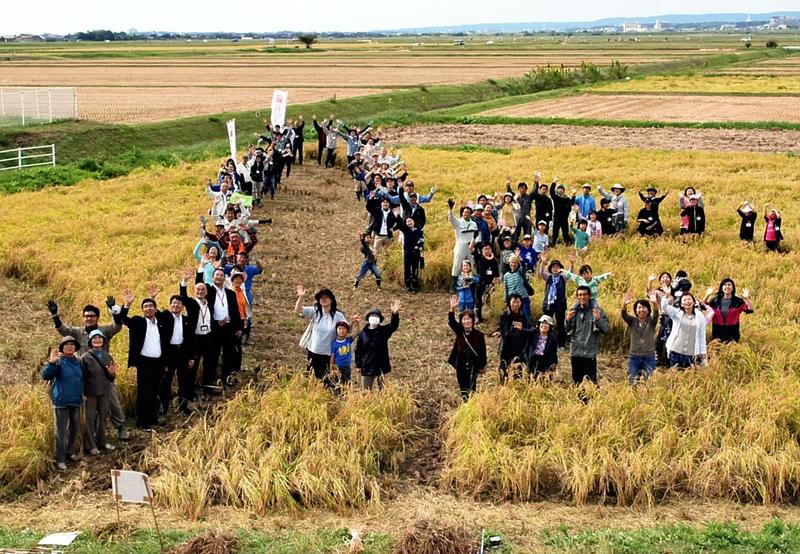 Members of a tour group pose for a commemorative photo at a paddy cut into the shape of a toki-crested ibis in Sado, Niigata Prefecture, in Japan, on Oct 14, 2017. (PHOTO / THE JAPAN NEWS)

Initially, there was anxiety among farmers that their crop yields would decline. But in fiscal 2017, the area for the certificated rice crops increased to 1,180 hectares, accounting for 23.7 percent of the total area for staple rice crops in the city.

Shinichiro Saito, 56, a rice farmer who has been engaged in promoting such agricultural methods as restricting the use of agricultural chemicals to help foster biodiversity since the early days of the project, said in retrospect: “I launched this farming method together with my predecessors, who said they ‘wanted to see toki fly in the sky again.’ That the number of ibises surviving in the wild has increased to as many as 300 was one of the results brought about through the supportive efforts of those in farming.”

As a result of the producers’ efforts, in 2011 “Sado’s Satoyama in Harmony with Japanese Crested Ibis” was designated as one of the Globally Important Agricultural Heritage Systems by the United Nations Food and Agriculture Organization. Satoyama refers roughly to rural forests near inhabited areas.

The certified rice has served as a driving force to promote safe rice production in Sado. Also, it serves as a chance to reexamine farming methods that have existed for a long time

To further enhance the brand power of Sado-produced rice, the Japanese Agricultural Cooperatives in Sado, or JA Sado, has been conducting promotional campaigns such as transporting Sado-grown rice in a truck decorated with an image of a crested ibis. The rice used at the onigiri shop in JR Tokyo Station is provided by JA Sado.

“The certified rice has served as a driving force to promote safe rice production in Sado,” said Manabu Watanabe, 48, chief of JA Sado’s rice sales section. “Also, it serves as a chance to reexamine farming methods that have existed for a long time.”

Sado is no exception to the aging of farming households and the shortage of successors.

“The environment the crested ibis inhabits cannot be protected without a lot of labor and time,” Saito said. “We want to share with consumers the farming methods we acquired in the process of realizing the toki’s return to the wild.”

Last year and again this year, artwork was created in Saito’s paddy depicting a toki crested ibis flying in the sky.

From conservation to utilization

According to the Environment Ministry’s Sado Nature Conservation Office, toki crested ibis releases have been conducted 18 times until the end of June this year, with 308 released. Between crested ibises released into the wild and those born in the wild, the number confirmed alive has increased to an estimated 300.

The ministry’s target of increasing the number of crested ibises capable of surviving for at least one year in the wild on Sado Island to 220 by around 2020 was thus achieved in June this year, two years ahead of schedule. Citizens in Sado have contributed significantly to creating an environment the birds can inhabit, the office said.

With the increase in the number of crested ibises surviving in the wild, the ministry will aim to promote regional revitalization by switching from “conservation” to “utilization” of the birds. It plans to begin construction of an ibis observation facility temporarily named “Toki no Terasu” (Toki terrace) in Sado this summer with completion scheduled for spring 2019.