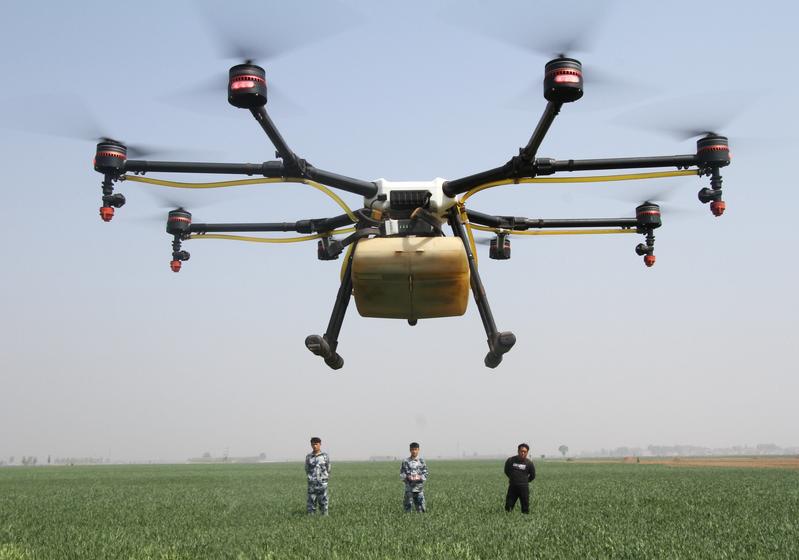 Pesticide is sprayed by a drone over a wheat field in Linzhang county, Hebei province. (HU GAOLEI / XINHUA)

The idea of an unmanned flying object whizzing overhead to deliver goods used to be the fodder of science fiction.

"The growth in unmanned aircraft systems, or drones, has been exponential, and the industry is poised to continue to grow. The next five to 10 years will be transformative as UAS technology advances by leaps and bounds."

But aerial drones, which are formally classified as "unmanned aircraft systems", could be set to deliver packages worldwide for Uber, Walmart and Amazon this year. They are already being used to assist police departments in the United States during search and rescue operations, among other tasks.

The number of drone patents applied for with the World Intellectual Property Organization rose by 34 percent globally between July 2017 and June last year, according to accountants BDO.

China is leading the pack after applying for 6,000 patents over that period. Chinese businesses represent six of the top 10 organizations applying for the patents, including the world's largest drone maker, SZ DJI Technology. The US filed 2,045 patents during the 12-month period.

Even as some US lawmakers push for a ban on Chinese-made drones, saying that the devices could send sensitive information back to China, the US Department of the Interior plans to use two models made by SZ DJI to scan federal land to prevent forest fires and handle controlled burns. The federal agency granted security clearance to two of the company's drones, the Mavic Pro and Matrice 600 Pro, SZ DJI said on Wednesday.

During more than two years of review, the Interior Department conducted more than 1,000 flights using drones made by the company in Shenzhen, Guangdong province, all of which were customized specifically to address government data concerns, SZ DJI said.

The department published its technical evaluation report online on July 2. "DOI has been working with DJI for over two years to create a solution that would allow the bureaus access to high-quality DJI hardware while at the same time preventing unwanted data leakage to outside entities," the report said.

In a bid to be the first in the US, Uber, Amazon and Walmart are jostling to develop a seamless drone delivery service within months.

Uber said on June 12 it had begun testing drone delivery for Uber Eats, its popular food delivery service. It is working with partner McDonald's, and could be delivering Big Macs by drones in San Diego later this summer.

The deliveries will not go to people's homes. The drones will land on designated safe zones, which could include a parked Uber car operated by a driver and identified by a QR code, according to Bloomberg. 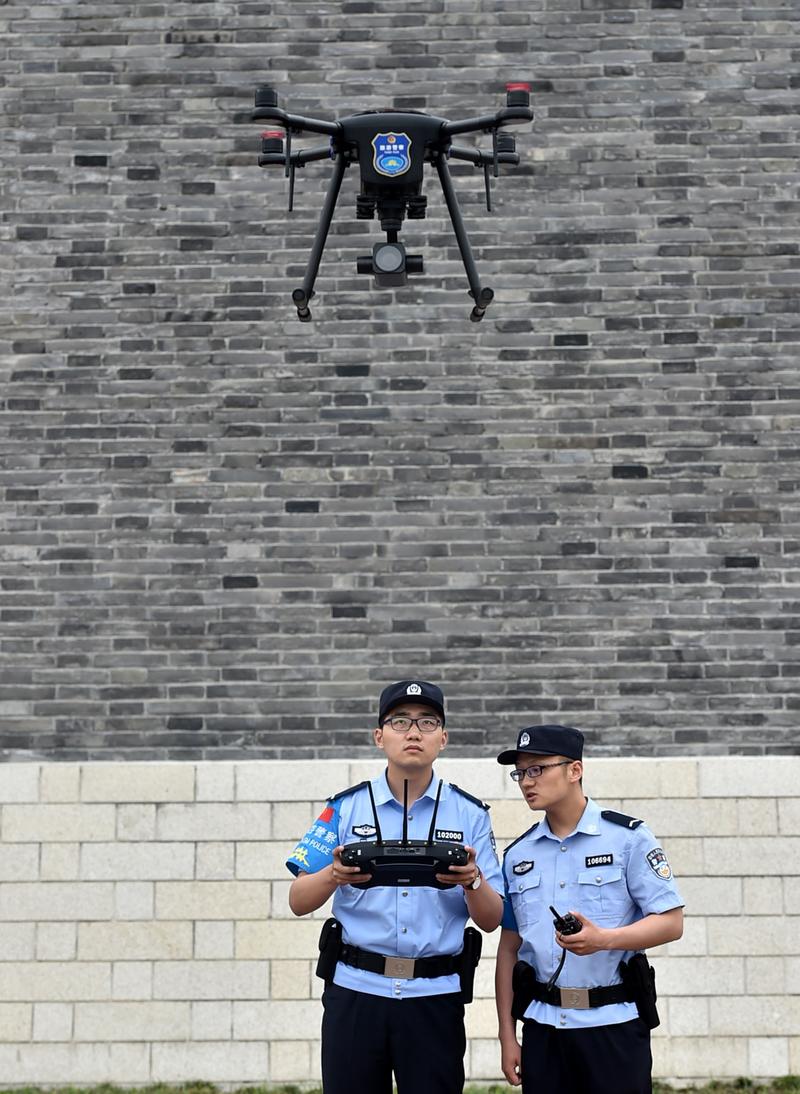 Police officers use a drone to patrol a park in Yangzhou, Jiangsu province. (ZHUANG WENBIN / XINHUA)

"Our goal is to expand Uber Eats drone delivery so we can provide more options to more people at the tap of a button," Luke Fischer, the company's head of flight, told Agence France-Presse.

Uber's head of aerial projects, Eric Allison, told Bloomberg that its drones can make a delivery of about 1.5 miles (2.4 kilometers) in seven minutes. It would take about 20 minutes by car or bicycle.

Amazon CEO Jeff Bezos has long held ambitions to have his company's goods delivered by drones. In December 2013, he told the television show 60 Minutes that drones would be a part of Amazon's future.

However, making it a reality has been slow going due to flying laws. In June, Amazon again said that it planned to start using drones "within months" to deliver packages to shoppers. But it did not state an exact date.

Amazon said the drones it has tested are so sophisticated that they can take off and land like a helicopter, detect people and avoid them. They can also fly around hazards, such as clothes lines.

The world's largest public company said it is working to build drones that are fully electric and can fly up to 25 km in 30 minutes, while carrying small items weighing less than 2.2 kilograms. It is not known if the drones could handle heavier packages.

Jeff Wilke, CEO of Amazon's consumer business, told The Associated Press, "From paragliders to power lines to a corgi in the backyard, the brain of the drone has safety covered."

Walmart, the world's biggest retailer, is also keen to be the first to offer drone deliveries. It has filed 97 patents with the World Intellectual Property Organization since July last year. That is more than Amazon, which filed 54 during the same period.

Walmart has another advantage over Amazon－it has at least 4,763 bricks-and-mortar stores in the US alone. Drones can only fly about 20 km, so it is beneficial if the launch point is close to customers, and 90 percent of US residents live 15 minutes from a Walmart outlet, according to Business Insider.com.

"The commercial drone space has seen dramatic growth in several areas, such as insurance, marine, wind farm, telecom, and construction," said Kathleen Swain, a commercial pilot and senior director of the unmanned aircraft systems program for the Aircraft Owners and Pilots Association.

"As technology continues to improve and regulations are eased, additional expansion will be seen in these marketplaces. The biggest hurdle is infrastructure, which requires the build out of UTM (unmanned aircraft system traffic management) to allow for growth in the commercial drone industry."

Internationally, there are strict regulations on where and when a drone can be flown. In the US, the Federal Aviation Administration's rules state that a UAS can only be flown "30 minutes before official sunrise to 30 minutes after sunset local time ... three miles from your control station.

Owners must also be registered and have a pilot's certificate to operate a UAS.

The European Union Aviation Safety Agency announced its own rules last month, aimed at simplifying drone-flying laws across member nations. The regulations will go into effect in June next year.

Aviation experts predict that the industry is poised to expand even further over the next five to 10 years. 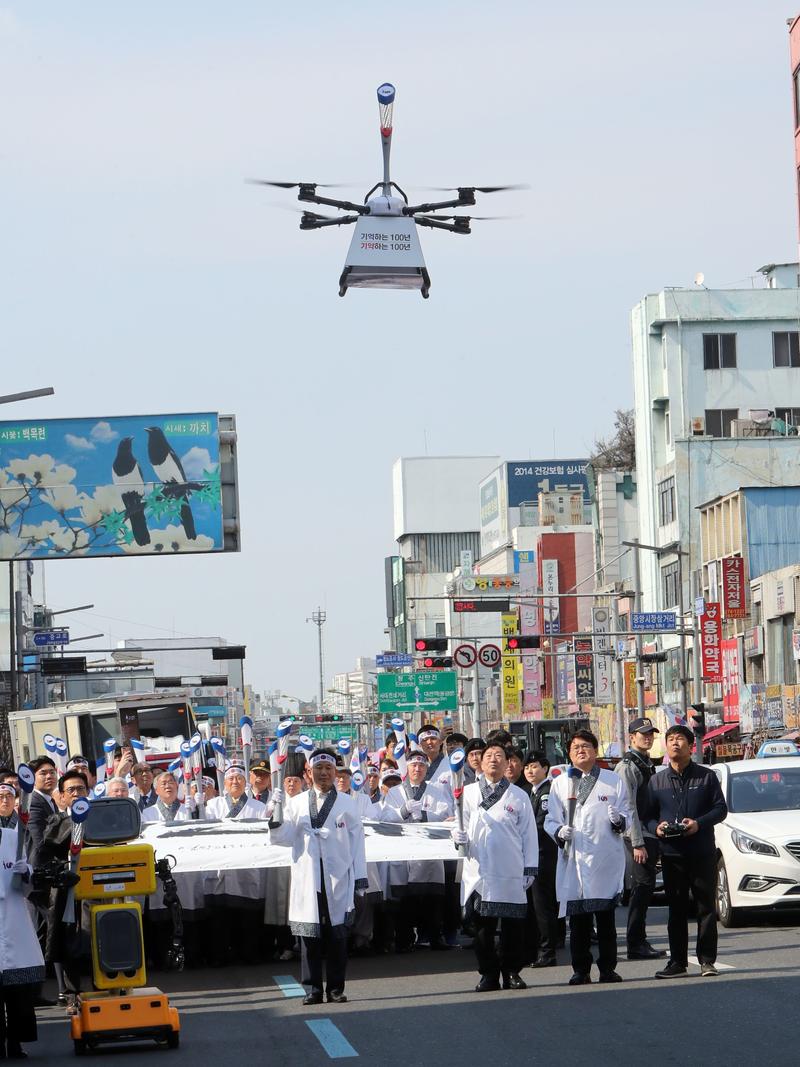 A drone takes to the air to promote an event in Daejeon, South Korea. (PHOTO / CHINA DAILY)

Tom McMahon, senior vice-president of advocacy and government relations at the Association for Unmanned Vehicle Systems International in Virginia, US, said, "The burgeoning UAS industry is a global industry with a global supply chain and is creating tens of thousands of new jobs in the US alone.

"Fortune 500 and 100 companies are among those increasingly integrating unmanned systems into their work. The Teal Group forecasts that non-military UAS production will total US$73.5 billion in the next few years, soaring from US$2.8 billion worldwide in 2017 to US$11.8 billion in 2026."

McMahon said companies are exploring ways to transport people with unmanned aircraft "in anticipation of policy that will permit that type of operation".

Police and other emergency personnel are using drones. At least 347 state, county and local police have bought a drone, according to a 2017 study by the Center for the Study of the Drone at Bard College, New York.

Wisconsin state capitol police have a fleet of drones and use them "to assist state, local, and tribal agencies with aerial photography of post-disaster damage assessments (such as flooding and tornadoes), searches for missing persons, documentation of crime scenes and traffic incidents".

According to Wisconsin State Police, the drones, which cost US$2,000 each, can be used in bad weather to "increase our ability to assist during critical life and safety incidents. The aircraft can also transmit live video feeds and photos to remote users... in the State Emergency Operations Center."

But they are not used for surveillance, Wisconsin State Patrol Lieutenant Christopher Jushka told wiscnews.com.

However, civil liberty groups warn that drones could still pose a threat to privacy.

"Drones cause surveillance problems," said Dave Patterson, a Vietnam veteran and activist for the organization San Diego Veterans For Peace. "There is a loss of privacy ... They can be dangerous, especially the ones that are weaponized.

"The police in certain areas－not all－are restricted to not using those things for surveillance, unless they have a warrant. The trouble is that if you have a helicopter flying over your house watching you, you know it. But with drones, depending on how big they are, they may not make a sound and could surveil your yard or wherever you're hanging out with your friends, and keep track of who's hanging out with who, and that's unacceptable."

Dan Hubbard, a spokesman for the National Business Aviation Association, said drones are a welcome addition to the industry.

"We have two thoughts [on drones]. The first is there is likely real potential for drones to augment existing aviation operations. That said, we have made it a top priority to work with regulators to ensure the safe integration of drones into the air space system.

"In terms of how drones might augment traditional business aviation operations, we see some of that already in place. Anecdotally, we are hearing of utility companies using drones to fly over areas with downed power lines. They can very often get the drones into an area faster than they used to by road, and they can get a comprehensive picture of what the situation is and what the utility company needs to do to fix it." 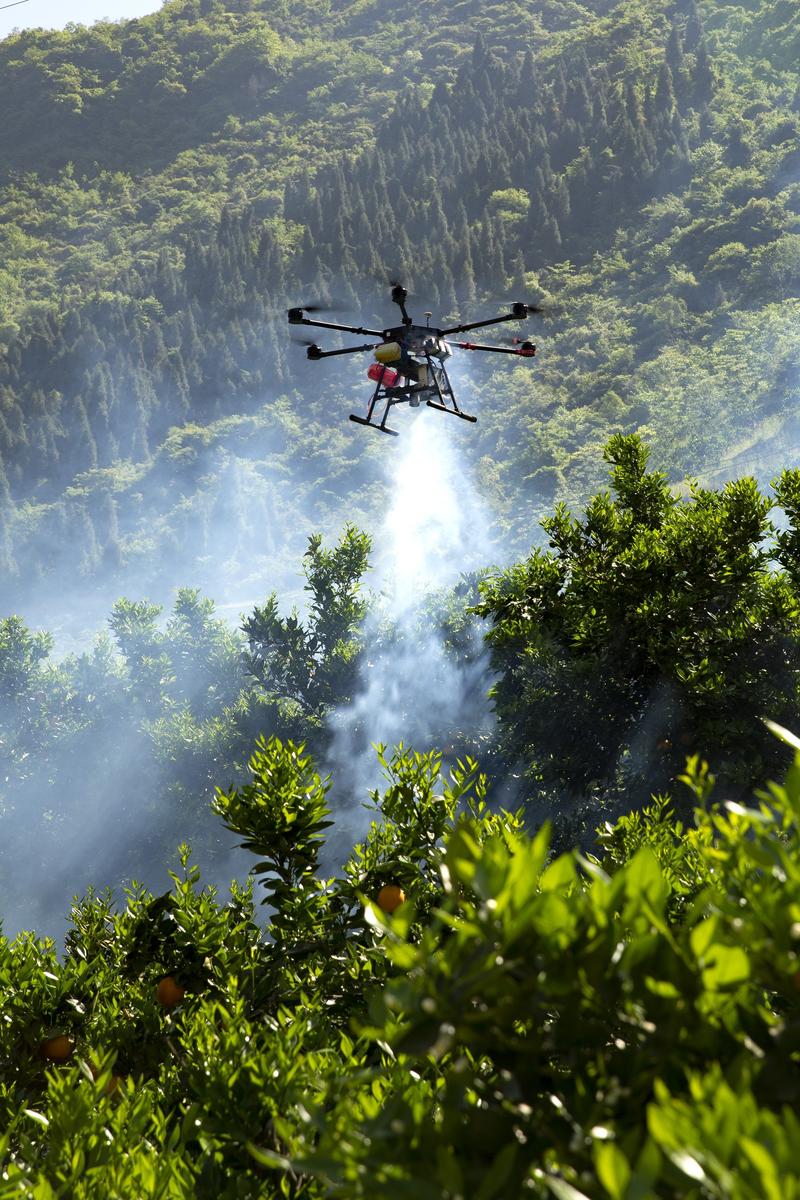 Another growth area will be the "vertiports", or strips that drones will need to land on, according to The Wall Street Journal.

The newspaper said investors from London to Singapore are busy trying to acquire plots that could be used as landing pads. These include shopping malls, parking garages and large stadiums－all flat areas because the aircraft needs a flat surface to land on.

But it is not cheap. A vertiport with a charging station and passenger area could cost US$1 million to build. And while it is likely that hundreds of these will be needed, US investors are proceeding with caution, as the FAA has not yet said whether it will approve their construction.

While drones are often faster than a car, one drawback is that the batteries on a UAS must be monitored during flight, as they tend to last about 20 minutes and must be charged frequently.

"Battery life is going to be one of the ongoing challenges," Hubbard said. "Nevertheless, even now, a drone with bad battery life can still be quite useful."

McMahon agrees. He believes the industry will continue to expand despite the challenges it faces.

"The growth in unmanned aircraft systems, or drones, has been exponential, and the industry is poised to continue to grow," he said.

"The next five to 10 years will be transformative as UAS technology advances by leaps and bounds."

Bloomberg contributed to this story.