Indian employers under pressure to respond to #MeToo allegations 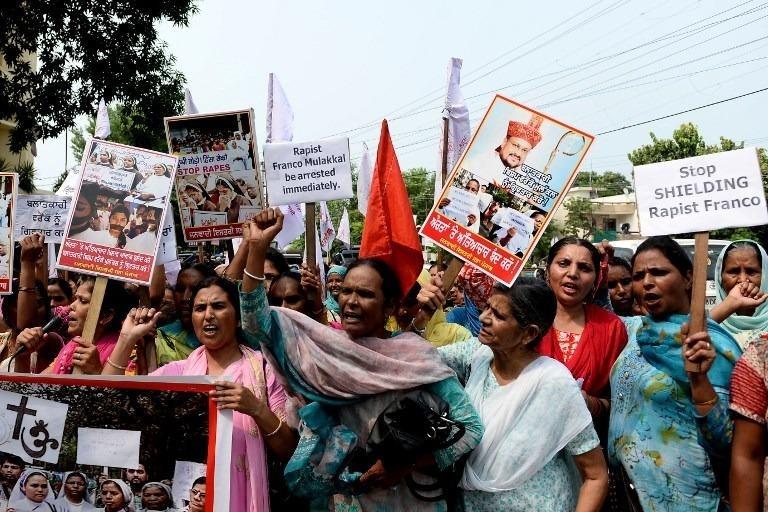 Indian women hold placards and chant slogans during a protest march to demand the immediate arrest of Roman Catholic church Bishop Franco Mullackal, who is accused of raping a nun, in Jalandhar on Sept 12, 2018. (SHAMMI MEHRA / AFP)

NEW DELHI — Pressure is building on major Indian employers to take allegations of sexual harassment more seriously after a surge in the number of complaints against prominent public figures in the past week.

At least one major Indian newspaper, some politicians and women's groups have said that the requirements of the 2013 Sexual Harassment of Women at Workplace Act need to be enforced by companies and organisations, and if necessary by the authorities.

The #MeToo movement, which began in the United States more than a year ago in response to accusations of sexual harassment and abuse by powerful men in the entertainment industry, gained traction in India in late September after the actress Tanushree Dutta said prominent actor Nana Patekar behaved inappropriately on the sets of a film they were shooting in 2008. Patekar has denied any wrongdoing.

Since then, more than a dozen men in the media, entertainment and art worlds have been accused of offences, ranging from sexual harassment to rape. A junior minister in Prime Minister Narendra Modi's government was accused this week of inappropriate behaviour by at least seven women.

India is traditionally a conservative country, where discussions about sex are still taboo for many and where women have long lagged behind men in workplace participation.

Hundreds of millions of Indians also work in the informal economy, or in small businesses where official channels of complaint are scarce, and the #MeToo movement is unlikely to have much leverage.

The 2013 sexual harassment law stipulates any organisation with more than 10 employees should have an independent committee to investigate allegations.

But critics say many organisations are not adhering to the letter of the law, or only paying lip service to it.

"The committees required to address these complaints and grievances are either not properly constituted or simply do not exist," said TK Rajalakshmi, president of the India Women's Press Corps, which lobbies for the rights of female journalists.

"The fact that many of the complaints have gone unheard despite being brought to the notice of the appropriate authorities is disturbing and a matter of grave concern."

In this file photo taken on May 4, 2013 Indian Bollywood actress Tanushree Dutta poses for a photo during an event for the Mandate Model Hunt contest in Mumbai. (PHOTO / AFP)

An editorial in the Economic Times, one of India's leading business publications, said on Tuesday that too often these committees have been "dysfunctional or ineffective".

"The cost of complaining has been too high," it said. "It is time to implement the law more effectively, both in letter and in spirit."

MJ Akbar, a former journalist who is now the minister of state for external affairs in Modi's Bharatiya Janata Party-led government, is one figure under increasing scrutiny.

On Monday, journalist Priya Ramani said on Twitter that an article she wrote for Vogue India in October 2017 concerning sexual harassment by an unnamed editor was about Akbar. In that article, she had described him as "an expert on obscene phone calls, texts, inappropriate compliments and not taking no for an answer". Adding: "You know how to pinch, pat, rub, grab and assault."

The Indian Express newspaper then published a report late on Tuesday in which five other named women - all journalists too - accused Akbar of inappropriate behaviour when he was an editor.

Reuters was able to speak to two of the five.

One of them, Kanika Gahlaut, said on one occasion Akbar had invited her to a breakfast meeting in his hotel room, but she did not turn up.

Another, Shutapa Paul, describes in a series of tweets a number of inappropriate comments and approaches by Akbar at meetings he arranged in a hotel and at his home in 2010-2011. He was editorial director of the news magazine India Today and she was a reporter in the Kolkata bureau at the time.

A seventh accuser, journalist Ghazala Wahab, said in a 2,300-word essay published on Wednesday by The Wire, an Indian online news site, that Akbar harassed her - both verbally and physically - over a six-month period in the 1990s.

The opposition Congress party and the government's Minister for Women & Child Development, Maneka Gandhi, said the allegations against Akbar should be investigated.

But some lawmakers from the ruling BJP, a Hindu nationalist party that stresses traditional family values, have questioned why some women making accusations against prominent figures have taken so long to air their claims.

"What is the point of alleging sexual abuse on a person 10 years later?" said BJP MP Udit Raj on Twitter.

One of the accusers of Akbar, Shutapa Paul, said she had waited years to tell her story because only now does she feel strong enough to go public. When the incidents happened she "struggled badly" with the trauma and stress, she said.

Also on Wednesday, TV director and writer Vinta Nanda told Reuters she was considering taking legal action after accusing the veteran actor Alok Nath of a 1999 assault in a Facebook post.

Nath is best known for playing father figures on TV, much like the American actor Bill Cosby, who was sentenced to prison for sexual assault in September.

"All the allegations are false," Alok Nath's lawyer, Ashok Saraogi, told Reuters. "We will file a suit seeking an injunction that she can't be permitted to make such allegations and defame his reputation in the media."