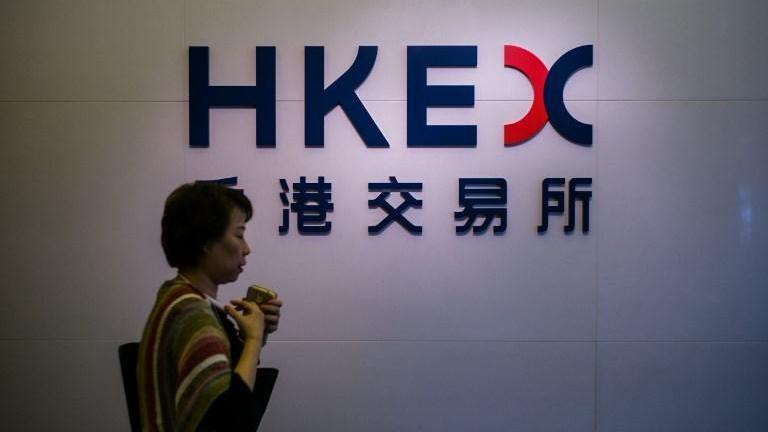 In this picture taken on Nov 17, 2016, a woman walks past signage for the Hong Kong Exchanges and Clearing Limited (HKEx) outside the stock exchange in Hong Kong. (ANTHONY WALLACE / AFP)

More new economy enterprises are expected to join the ranks of the “Hong Kong Top 100 Stocks” in the near future as the city’s bourse is sparing no efforts in luring new, high-growth industries to its fold.

This is despite the fact the traditional industries remain a force to be reckoned with.

At the 2017 Hong Kong Top 100 Stocks Awards ceremony held at Admiralty on Thursday, some of the biggest names in the banking and energy sectors grabbed top honors.

The 2017 list, drawn up by finance media Finet and Hong Kong Polytechnic University’s Faculty of Business, based their assessments on financial data derived from listed companies’ 2016 annual results, while the closing prices of their stocks on the last trading day of September, 2017 were used in the calculations.

Lu Haitian, associate dean of PolyU’s Faculty of Business, said the capitalization of mainland property developers had risen significantly during the period in question, compared with that of the previous year.

The total market capitalization of mainland developers nominated for the awards soared 20 percent compared over the 2016 list, while returns on their stocks jumped from 19 percent to 59 percent, he revealed.

Ba Shusong, chief China economist with the Hong Kong Stock Exchange, said a major shake-up of the dominance structure of real-estate and financial enterprises on the “Top 100” list is imminent as China pushes for a conversion for old and new driving forces in economy upgrading.

“In the 1980s, the top performers on the Chinese mainland were manufacturers of watches and bicycles. In the 90s, TV and air-conditioner makers were leading the way, then it was the turn of real-estate and automobile players, Now, we see the time has come for new economy entities,” he said.

Ba said as the GDP contributions from the traditional industries peaked and slowed down, flourishing new economy companies are essential for a country’s economic growth.

“According to our studies, a whopping amount of the capital expenditure of tech enterprises - as high as 60 to 80 percent – is spent during their initial operation phases when they need capital the most, but their profitability cannot meet the listing requirements of most bourses. We’re clearing such barriers for them,” Ba added.

HKEx has come up with a slew of new initiatives, including accepting dual-listed shares and lowering the threshold for biotech companies without revenues in a bid to lure more companies at the cutting edge of technology.

The Hong Kong Top 100 Stocks Awards are handed out on the basis of the competitiveness of companies listed in the SAR, using five key indicators - revenue, aggregate market value, net profit after taxation, return on equity and total return on investment.