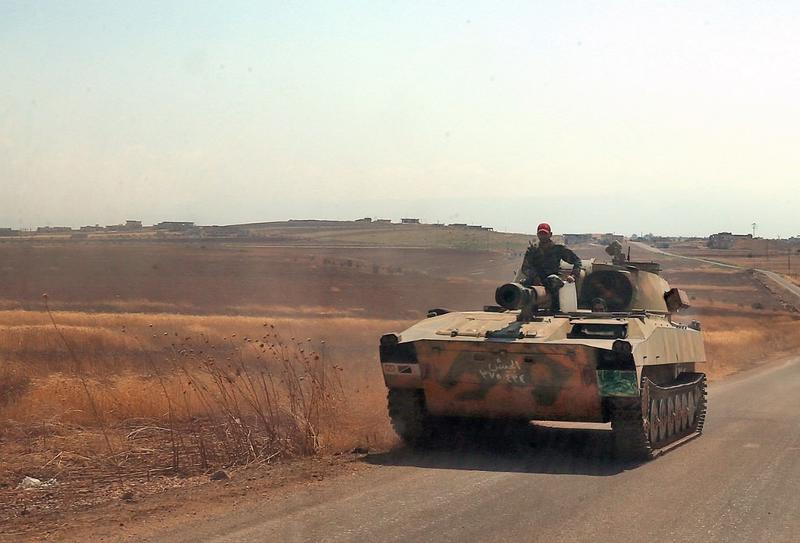 In this Aug 18, 2019, photo, Syrian government forces drive towards the town of Khan Shaykhun in the southern countryside of the rebel-held Idlib province. (PHOTO / AFP)

ANKARA/BEIRUT — Syrian government forces opened a corridor on Thursday for people who want to leave insurgent territory in northwest Syria, where an army offensive has gained ground, state media said.

Turkey and the United States have agreed to immediately launch the first phase of the safe zone plan in Syria, following a phone conversation late Wednesday between their defense chiefs

Ten of thousands of people have fled towards the Turkish border in recent days as air and ground attacks battered parts of Idlib and Hama in the northwest, the last big rebel stronghold.

After the collapse of a brief ceasefire this month, Syrian army troops, backed by Russia, have now marched into a town in Idlib province in rebel hands since 2014.

The United Nations says hundreds of people have been killed since the offensive began in late April. More than 500,000 people have been uprooted since, it says. Most escaped deeper into the rebel bastion and towards the border, while about 30,000 have fled into government territory.

It said the corridor would allow civilians to leave the southern part of Idlib and the north of Hama. The government would provide them with food, shelter and healthcare, it said.

Naji Mustafa, spokesman for the National Liberation Front rebel coalition, dismissed the opening of the latest corridor as an attempt to hit morale. 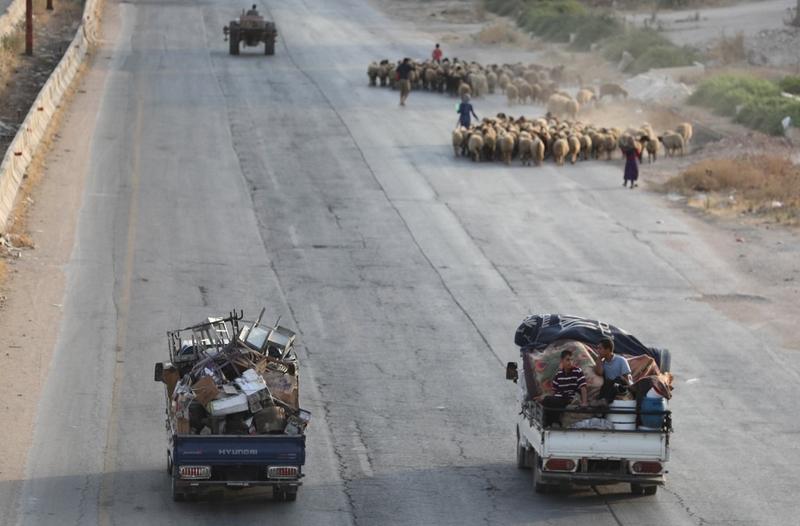 In this Aug 14, 2019 photo, Syrian families from the southeastern Idlib province and the northern countryside of Hama fleeing battles with trucks loaded with their belongings, drive past a flock of sheep on the highway, as they drive near Maaret al-Numan in the southern Idlib province. (OMAR HAJ KADOUR / AFP)

"It's impossible today for people to head towards the Syrian regime's areas. These people have escaped the regime," he said.

UN estimates put the population of northwest Syria at nearly three million people. Many poured into the region after fleeing fighting in other parts of Syria that President Bashar al-Assad recovered with Russia and Iran's help.

Moscow and Damascus say they are responding to militant attacks by the former Nusra Front, a jihadist alliance now known as Hayat Tahrir al-Sham. It is the dominant force in Idlib, where Turkey-backed factions also have a presence.

Turkey and the United States have agreed to immediately launch the first phase of the safe zone plan in Syria, following a phone conversation late Wednesday between their defense chiefs, state-run Anadolu agency reported. 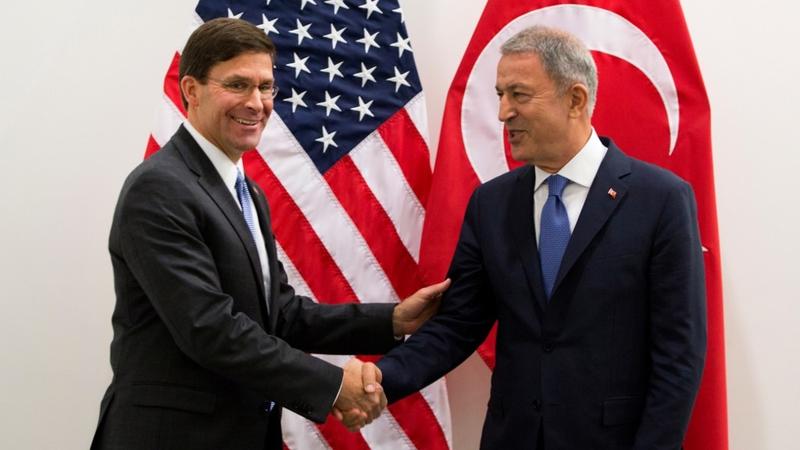 In this June 26, 2019 photo, then acting US Secretary for Defense Mark Esper (left) shakes hands with Turkish Defense Minister Hulusi Akar (right) prior to a meeting with NATO's defense ministers at the NATO headquarters in Brussels. (VIRGINIA MAYO / POOL / AFP)

Akar said the safe zone in the east of the Euphrates river in Syria should be established within the framework of the principles set out in the calendar without losing time, the statement said.

Akar had previously said that joint Turkish-US operation center will be fully operational this week in Turkey's southeastern Sanliurfa province near the Syrian border.

On Aug 7, Turkish and US officials agreed to set up a safe zone and develop a "peace corridor" in northern Syria which would address Ankara's security concerns about a Kurdish faction that controls the territory.

The safe zone would also facilitate the return of displaced Syrians currently living in Turkey to their home country.