Putting prices in the frame

Beyond the name and reputation of the artist, factors at play include the work’s provenance and the collectors’ willingness to spend 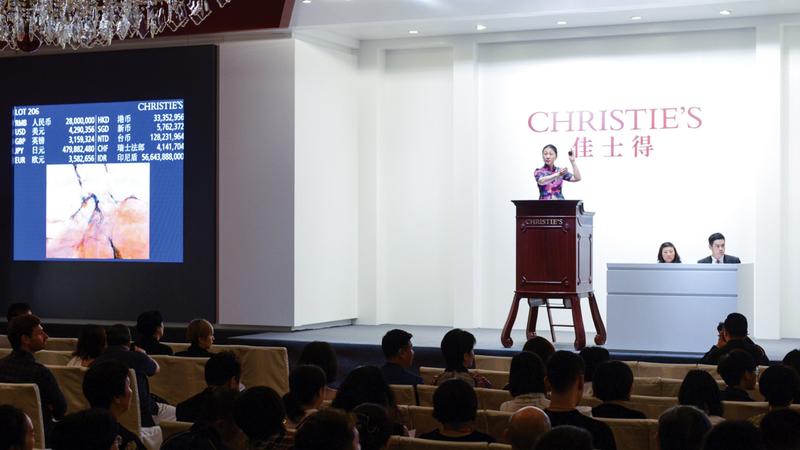 A Christie’s auction of contemporary art held in Shanghai in September last year. Art prices depend on many factors, including market liquidity. (PHOTO PROVIDED TO CHINA DAILY ASIA WEEKLY)

The international art scene ended 2017 with a bang after it witnessed the sale of the world’s most expensive artwork.

Leonardo da Vinci’s Salvator Mundi was purchased for US$450.3 million at a Christie’s New York auction in November. Saudi Prince Badr Abdullah Mohammed Farhan Al-Saud bought the painting on behalf of the Abu Dhabi Department of Culture and Tourism.

That Salvator Mundi can be auctioned off at such a staggering price may seem par for the course. The painting, after all, was produced by Da Vinci, a pillar of the international art world. But as art industry experts interviewed by China Daily Asia Weekly revealed, it will take more than an artist’s reputation to inflate the price of any piece of art.

“An art market is like any other market. It’s about supply and demand,” said Christoph Noe, founder of art advisory firm The Ministry of Art.

He said the collector’s financial situation will dictate when he buys, what he wants to buy and how much he is willing to spend.

“Liquidity is an underlying factor. When there is so much cash lying around, people will buy artworks,” he said.

Noe said this explains why top Chinese collectors have entered the art market in recent years, at the height of China’s economic boom.

He added that since a top piece of art is one of a kind, all that it takes to see the price spike is bidding from two high net worth individuals.

The 2014 Christie’s New York auction for an untitled Martin Kippenberger self-portrait is a case in point. The German artist’s painting had a pre-sale estimate of between US$9 million and US$12 million. It sold for a record US$18.6 million after a heated bidding war between two phone bidders.

The buyer was businesswoman Zhang Lan, founder of the South Beauty Group chain of upscale restaurants and one of China’s biggest art collectors.

From the supply side of the equation, the artist is perhaps the most important factor in determining the price of an artwork.

Leo Xu, one of the directors of the David Zwirner Gallery in Hong Kong, said a gallerist prices an artwork based on the artist’s “institutional reputation”.

“How many museum shows or biennales has he participated in? How many solo shows has he held? Is there any major art publication that covered his exhibits?” he said.

Xu said only artists who reach a certain level of institutional status are capable of setting record-breaking prices.

Such artists are well-established, with pieces collected by top museums and prominent collectors, and with solo exhibitions covered and critiqued by reputable publications.

Zhang Xiaogang is known for setting new records in international auctions. His 1988 triptych oil work Forever Lasting Love sold for US$10.1 million at Christie’s Hong Kong in 2011. In 2014, Zhang’s Bloodline: Big Family No. 3 sold at Sotheby’s in Hong Kong for US$12.1 million.

While the price tags on Zhang’s pieces may have raised some eyebrows, the surrealist artist had honed his craft for more than two decades before reaching the top of the art world’s totem pole.

Years before his record-breaking feat in 2011, Zhang had already held several solo exhibitions in Beijing, Paris and New York. He joined some of the most prestigious museum shows and art expos in Asia, Europe and the Americas. One of Zhang’s earliest patrons was Uli Sigg, the former Swiss ambassador known for his extensive collection of contemporary Chinese art.

No novice artist, no matter how gifted, can immediately charge eye-popping prices. But Xu said that if the artist patiently develops his career by launching exhibits, joining art expos and getting media mileage, then the prices of his works will adjust accordingly.

“If there’s not much happening in an artist’s career and the price of his artwork is rising, then that’s irrational. How can you build a career without doing anything?” he said.

Julia Ip, an art business lecturer at The University of Hong Kong, said that apart from credentials, the artist’s character will also determine his status — and ultimately his artwork’s price — in the market.

Ip is an art collector who has worked with many artists. Artists who are hardworking, productive and willing to learn are the ones who succeed, she said.

Certain pieces are also priced based on their position in an artist’s career path. This is mostly applied to old masters, postwar artists and more senior contemporary artists who went through several stages of their career and were influenced by the dominant art style of a certain era.

“How do you see the work as part of a body of work of a certain artist? Is this a good (creative) period for the artist? Is this style very much favored by the market at the moment?” The Ministry of Art’s Noe said.

Ip cited Pablo Picasso, whose long and productive career went through various phases and in the process produced artworks in various styles.

The Spanish painter is known for pioneering Cubism, but he also produced works that contributed to the surrealist and symbolist art movements. Ip said the prices of Picasso’s paintings and sketches also rely on the period from when they were produced.

Ip said another key determining factor of price is provenance. Artworks owned by some of the world’s biggest private collectors and bought by major art dealers and galleries are highly valued. This is because of the perception that these collectors are tastemakers and have the resources to keep their artworks in pristine condition.

Ten Auspicious Landscapes of Taishan was produced by the 18th-century court painter Qian Weicheng. The piece shows 10 vistas of Tiantai Mountain in East China’s Zhejiang province and is based on Qian’s travels with the Qianlong Emperor. Each of Qian’s ink-and-color illustrations is paired with a poem by the emperor.

Salvator Mundi was commissioned by King Louis XII of France more than 500 years ago, and later passed on to several generations of European royalty.

The piece was also auctioned by Sotheby’s in 1958. More recently it belonged to Russian billionaire Dmitry Rybolovlev, who bought it in a private sale in 2013.

Salvator Mundi, an enigmatic portrayal of Jesus Christ, is considered Da Vinci’s long-lost painting. It was only determined as an authentic Da Vinci artwork after it was restored, rediscovered, and included in an exhibition at London’s National Gallery in 2011.

The painting was acquired in 2005 for less than US$10,000 by a consortium of art dealers. It was thought to be a copy of an original because it was heavily painted.

Ip said stories like that can bring an “unquantifiable” element in pricing an artwork. “It’s about emotions (and that’s) difficult to quantify,” she said.

Ip said gallerists and auctioneers spend a lot of money to research more about the artwork so that they can appeal to the collectors’ emotions.

“They create a feeling that an artwork is of high value,” she said.

Such emotions can dictate prices because, Ip said, the art market is neither regulated nor transparent. Market information is also not highly publicized.

This is why Ip advised aspiring collectors to read books and journals and to talk with gallerists, dealers, artists and advisers before buying.