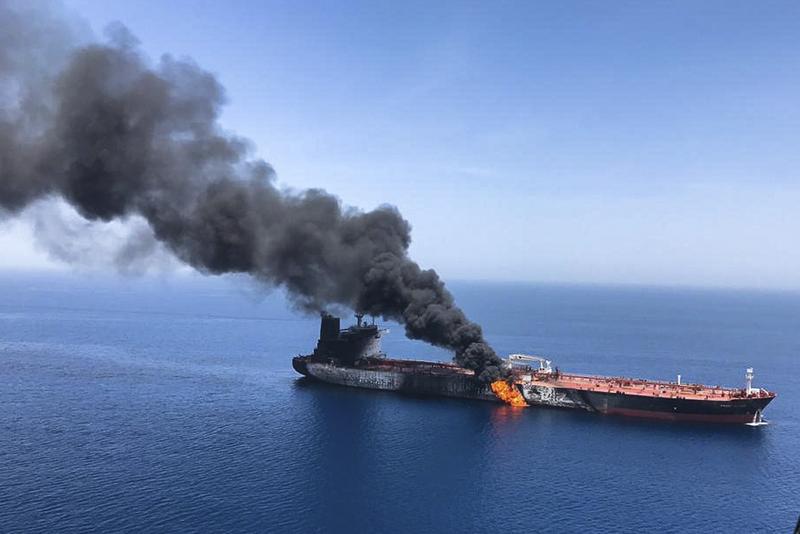 DUBAI, United Arab Emirates — As the US tries a new way to protect shipping across the Persian Gulf amid tensions with Iran, it finds itself sailing into uncertain waters.

For decades, the US has considered the waters of the Persian Gulf as critical to its national security. Through the gulf's narrow mouth, the Strait of Hormuz, 20% of all crude oil sold passes onto the world market. Any disruption there likely will see energy prices spike.

The US has been willing to use its firepower to ensure that doesn't happen. It escorted ships here in the so-called 1980s "Tanker War." America fought its last major naval battle in these waters in 1988 against Iran.

Now, the US Navy is trying to put together a new coalition of nations to counter what it sees as a renewed maritime threat from Iran.

But Tehran finds itself backed into a corner and ready for a possible conflict it had 30 years for which to prepare. It stands poised this week to further break the terms of its 2015 nuclear deal with world powers, over a year after US President Donald Trump unilaterally withdrew America from the accord and imposed crippling sanctions on the country. 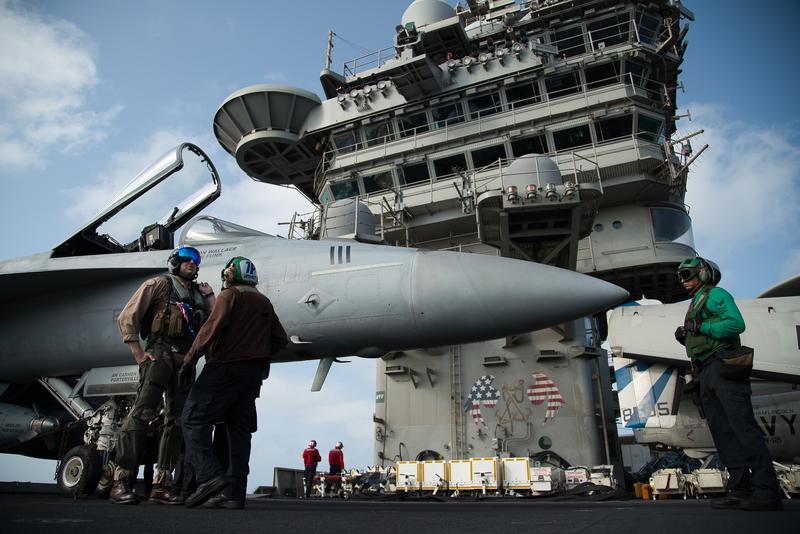 In this June 3, 2019 photo, a pilot speaks to a crew member by an F/A-18 fighter jet on the deck of the USS Abraham Lincoln aircraft carrier in the Arabian Sea. (JON GAMBRELL / AP)

"It is plausible to imagine a scenario where these forces stumble into some type of accidental escalation," said Becca Wasser, a senior policy analyst at the RAND Corp who studies the region.

The US-led Sentinel Program's strategy aims to secure the greater Persian Gulf region in a multipart strategy. It includes surveillance of the Strait of Hormuz and the Bab el-Mandeb, another narrow strait that connects the Red Sea and the Gulf of Aden off Yemen and East Africa. Smaller patrol boats and other craft will be available for rapid response.

The plan also allows for nations to escort their own ships through the region, said Cmdr Joshua Frey, a spokesman for the US Navy's 5th Fleet, which oversees the region. For now, the Bahrain-based 5th Fleet is not escorting US-flagged ships through waters, though that remains a possibility, he said.

So far, only Australia, Bahrain and the United Kingdom have said they'll join the US program. India has begun escorting its own ships independently of the US coalition.

Some of what the US plan calls for already falls under the routine operations of the 5th Fleet, which has been in the region since 1995.

US Navy ships coming in and out of the Persian Gulf often find themselves shadowed by Iranian Revolutionary Guard vessels. Some incidents have seen the US fire warning shots or Iranian forces test-fire missiles nearby.

But the new forces, as well as Iran facing growing financial pressure from US sanctions, have raised the stakes for conflict, said Michael Stephens, a senior research fellow who focuses on the Mideast at London's Royal United Services Institute for Defense and Security Studies. 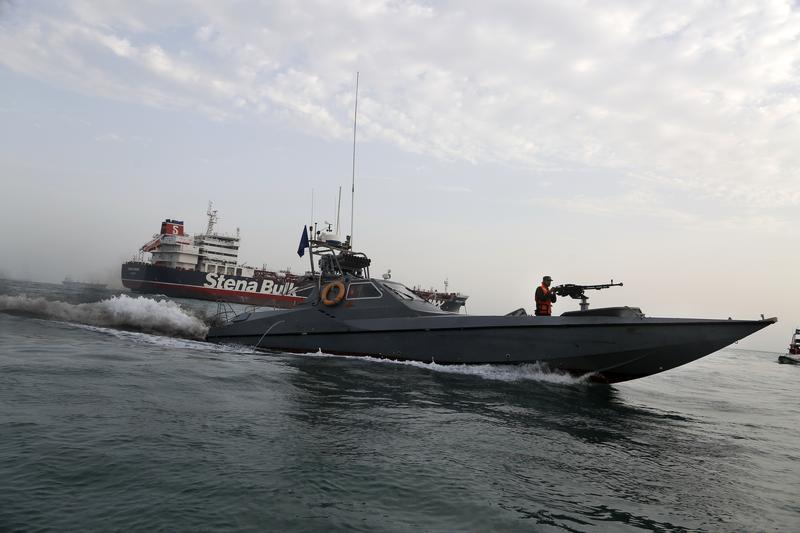 In this July 21, 2019 photo, a speedboat of the Iran's Revolutionary Guard moves around a British-flagged oil tanker, the Stena Impero, which was seized by the Guard, in the Iranian port of Bandar Abbas. (HASAN SHIRVANI / MIZAN NEWS AGENCY VIA AP)

"When you change the chessboard, you are effectively permanently changing the conditions under which you're operating," Stephens said. "How you cannot make that look like an escalation is anyone's guess because it is an escalation."

Iran itself hasn't sat still. The Guard, a paramilitary force answerable only to Supreme Leader Ayatollah Ali Khamenei, pilot speedboats through the Strait of Hormuz and run drills practicing swarming larger warships. It possesses shore-to-ship missiles. It also, according to US officials, has special forces capable of sneaking up on unsuspecting ships to plant explosive mines.

One of the immediate dangers is in the response to Iran itself. During the Somali piracy crisis of the 2000s, the rush of navies to the region saw fishermen wrongly targeted for attack in at least one incident, said Salvatore R Mercogliano, a former merchant mariner and associate professor of history at North Carolina's Campbell University.

While the Strait of Hormuz is just 33-kilometers wide at its narrowest point, there is a lot of surrounding area to cover for such a force. Trying to run convoys of ships through the areas also would slow down traffic and delay shipments. Meanwhile, the small fast boats of Iran's Guard easily can be missed among the fishermen and traditional dhow ships moving through the busy waters.

"It's very easy to get lured one way or another and miss something," Mercogliano said. 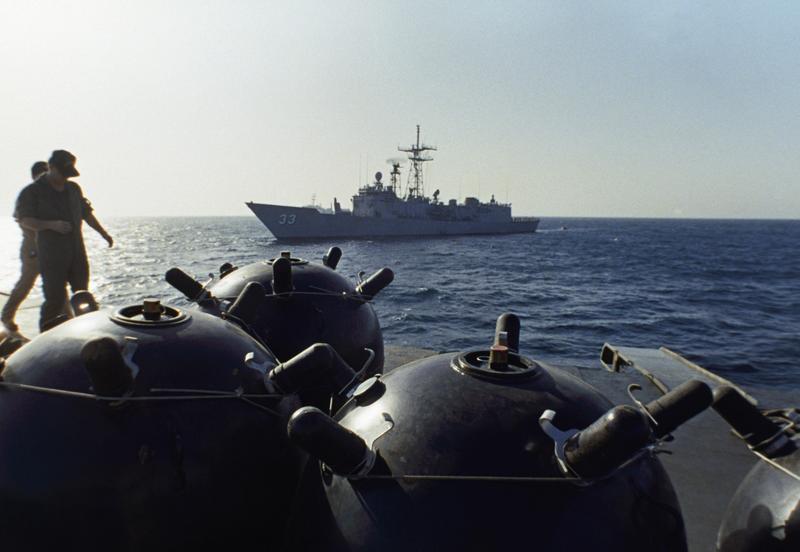 This Sept 21, 1987 file photo shows mines aboard the Iranian ship Iran Ajr being inspected by a boarding party from the USS Lasalle in the Persian Gulf. (MARK DUNCAN / AP)

Meanwhile, US authorities warn that ships in the region have reported "spoofed bridge-to-bridge communications from unknown entities falsely claiming to be US or coalition warships." Ships also have reported interference with their GPS systems, according to the US Transportation Department's Maritime Administration. That could see ships accidentally enter Iranian territorial waters and offer a pretense for its forces to board.

READ MORE: Iran's Rouhani rules out bilateral talks with US

For mariners in the region, the Strait of Hormuz has been declared a temporary extended risk zone, qualifying them for a bonus and higher death and disability coverage. And while the mariners may be on Western-owned or -flagged vessels, many come from poorer countries in Eastern Europe or Asia.

"The normal seafarers are the ones being caught up in this geopolitical game," said Jacqueline Smith, the maritime coordinator for International Transportation Workers' Federation.