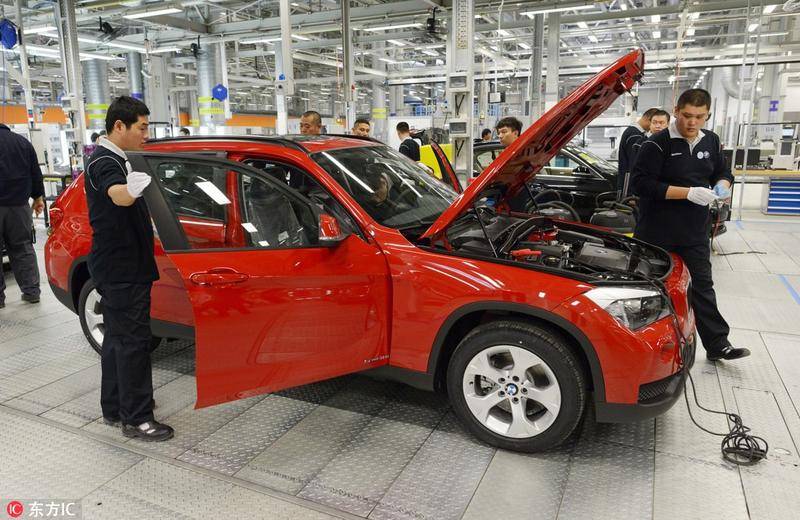 In this undated photo, final assembly of a BMW X1 at the production plant of BMW-Brilliance Automotive in Shenyang. (PHOTO / IC / chinadaily.com.cn)

Undergoing checks by customs officers on the site, the auto parts were transferred to a production line for assembly. Traditionally, the containers arrived at a railway station before they were transported by trucks to the plant.

"The new logistics service can not only increase the clearance efficiency, but also save our logistics costs," said Tian Lihua, director of the company's import and export department.

Allowing freight trains to stop at the door of a company's plant is one of the latest moves Liaoning has made to attract global investors to rejuvenate its economy.

In early May, Liaoning issued a guideline on rejuvenation through all-round opening up, promising to further ease market access for foreign investors. A management model based on a preestablished national treatment policy plus a negative investment list will be implemented.

It will completely open up its general manufacturing sector to foreign investors, while market access to sectors like telecommunications, medical services, education, elderly care and new energy vehicles will also be expanded.

Northeast China－Liaoning, Jilin and Heilongjiang provinces－have been struggling for growth following the decline of their traditional heavy industries.

"Investment does not go beyond the Shanhaiguan Pass," it is said, referring to a geographical division between Northeast China and the rest of the country.

BMW Group is a pioneer foreign investor going beyond the Shanhaiguan Pass and doing well in Shenyang.

It set up the joint venture BMW Brilliance Automotive with Brilliance China Automotive Holdings in 2003 when China launched the first round of its strategy to turn its rust belt into modern industrial zones.

The economy of Liaoning is showing signs of recovery, and a growing number of global investors have started taking root

BMW's performance in China so far this year is promising, with sales of BMWs and Minis in the Chinese market up 7.1 percent year-on-year to 152,942 vehicles in the first quarter, a record high.

The automaker has invested more than 52 billion yuan (US$8 billion) in its Shenyang facilities since 2009. The city has become BMW Group's largest production base worldwide.

Johann Wieland, president and CEO of BMW Brilliance Automotive, said that the key to BMW's success in China is its localization strategy.

The government has offered big support to the automaker, which hopes to make a greater contribution to the local economy in the future.

"Undoubtedly, BMW has brought big economic benefits to us. But more importantly, it can teach us more advanced ideas, thinking and technology," said Dong Feng, a Shenyang official.

In addition to BMW, Liaoning has been making efforts to attract other global investors to various sectors.

The central government rolled out new measures to revitalize its old industrial base in Northeast China in 2016, and set up a free trade zone in Liaoning last year.

The economy of Liaoning is showing signs of recovery, and a growing number of global investors have started taking root.

Statistics released from the provincial department of commerce showed that Liaoning's actual inflow of foreign investment reached US$5.34 billion in 2017, up 77.9 percent year-on-year.

Du Liangsheng, an economist with Dongbei University of Finance and Economics, said that the economic recovery would be a long process.

"It is a result of economic restructuring and government efforts to create a more attractive investment environment to woo more investors," he said.