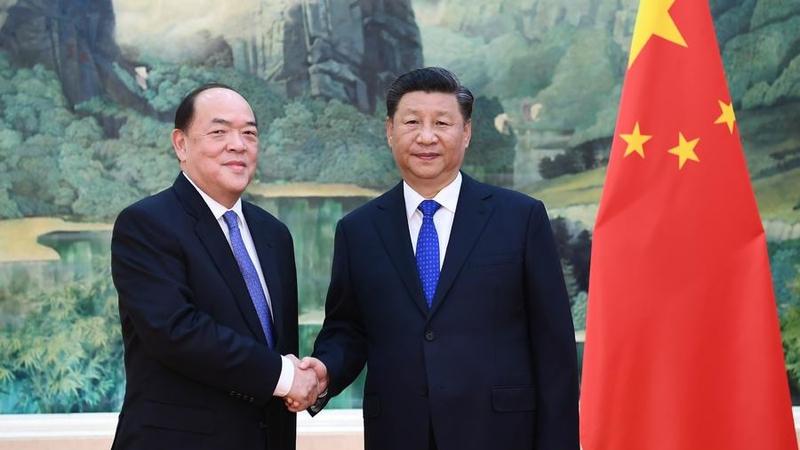 In this photo taken on Sept 11, 2019, Chinese President Xi Jinping meets with Macao Chief Executive Ho Iat-seng at the Great Hall of the People, in Beijing, capital of China. (XIE HUANCHI / XINHUA)

The "one country, two systems" policy has proved itself to be totally feasible, workable and to have the support of the people, President Xi Jinping said on Wednesday in Beijing.

Xi made the remark while meeting with Ho Iat-seng, the new chief executive of the Macao Special Administrative Region.

Xi congratulated Ho for his appointment as the fifth-term chief executive of the Macao SAR.

This year marks the 20th anniversary of the return of Macao to the motherland. Over the past 20 years, the Macao SAR government, under the leadership of the two previous chief executives, Edmund Ho Hau-wah and Fernando Chui Sai-on, united the people and carried out the "one country, two systems" policy in a comprehensive and precise manner, Xi said.

He said the SAR government stood firm in safeguarding the authority of the Constitution and the Basic Law, carried forward the core values of patriotism and a love for Macao and enabled quick economic growth, continuous improvement in public livelihood and social stability and harmony.

It has showcased to the world the successful practice of "one country, two systems" with Macao characteristics, Xi said.

He also commended Ho for his patriotism and love of Macao and enthusiastic services to the region and society, and for his positive contribution to the nation's reform and opening-up and modernization during his tenures as a member of the Standing Committee of the National People's Congress, the top legislature, and president of Macao's Legislative Assembly.

The central government fully acknowledges Ho's efforts, and the fact that he was elected with a wide margin during the region's elections in August shows he has widespread support in Macao, he noted.

Xi expressed his hope that Ho can think in big-picture terms and take a long-term perspective so as to accurately grasp the actual situation of Macao and the requirements of the national development strategy.

He also encouraged Ho to unite and lead the new SAR government and Macao people in pressing ahead with reform and innovations, carefully plan the region's long-term development and continue to write a new chapter of the successful practice of the "one country, two systems" policy.

Ho said he will unwaveringly carry out the "one country, two systems" policy under the leadership by Xi and the central government.

Premier Li Keqiang on Wednesday handed Ho a State Council decree to appoint him as the fifth-term chief executive of the Macao SAR during a meeting and voiced his hopes that the Macao SAR government can take advantage of opportunities from the development of the Guangdong-Hong Kong-Macao Greater Bay Area and promote Macao's diversified development.